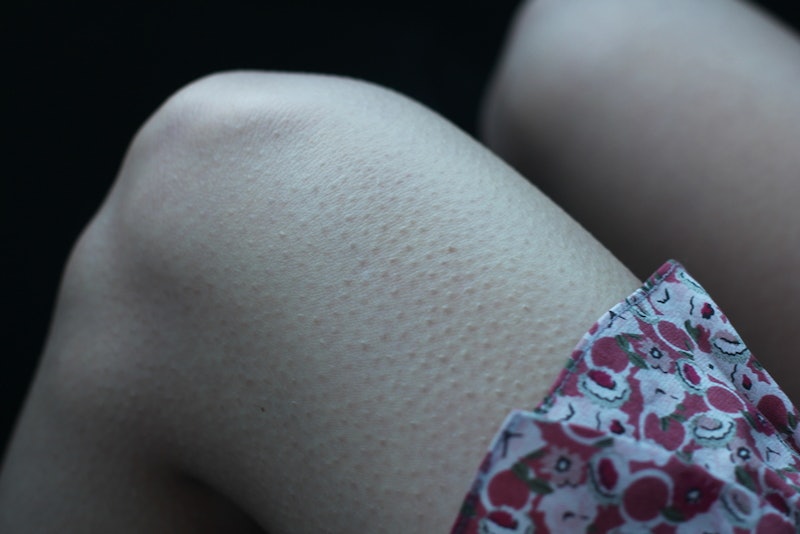 Goosebumps. They coat your flesh when you get out of a cold pool, run down your spine when you hear your favorite song, and make the hairs on the back of your neck stand at attention when you're scared. If you've spent a lot of time ruminating on the reason behind this whole goosebumps thing but come up empty, the scientific reason you get goosebumps when you're scared might surprise you. According to Scientific American, goosebumps are something we've inherited from our animal ancestors, and similar to throwaway body parts like wisdom teeth and the appendix, they actually don't seem to serve any useful purpose for humans in modern society.

"These bumps are caused by a contraction of miniature muscles that are attached to each hair. Each contracting muscle creates a shallow depression on the skin surface, which causes the surrounding area to protrude," George A. Bubenik, a physiologist and professor of zoology at the University of Guelph in Ontario, Canada, explained for Scientific American. "The contraction also causes the hair to stand up whenever the body feels cold. In animals with a thick hair coat this rising of hair expands the layer of air that serves as insulation. The thicker the hair layer, the more heat is retained. In people this reaction is useless because we do not have a hair coat, but goosebumps persist nevertheless."

According to the University of Melbourne in Australia, which is studying goosebumps and their potential therapeutic benefits, the reason you get goosebumps when you're scared has to do with adrenaline. In our furry friends, when goosebumps cause their hair to stand up in response to a threat, they appear bigger. This can make it more likely for potential enemies to back off.

So, when you're afraid of something, your goosebumps are actually trying to protect you. And while your arm hair standing on end probably isn't going to help much, it can serve as an alert system. "Strong emotions can also cause adrenaline to be released, which is why we get goosebumps in response to music we love, or a strong memory," Jane Gardner wrote for the university's news section. "Some people experience goosebumps more than others based on how much hair they have or their tendency to panic."

What's more, a study from Harvard University found that goosebumps might actually be a sign of good health. Those who experience goosebumps while listening to live music were found to be more positive, generous, creative, and more in touch with their emotions. This makes sense in relation to old-timey days when being healthy, strong, and full of goosebumps increased your chances of thwarting off would-be attackers.

Another study from Northeastern University in Boston found that some people actually have the ability to induce goosebumps, which would have been a valuable tool for staying safe in primitive times. The study found that people who were able to induce goosebumps, known scientifically as voluntarily generated piloerection, were more emotionally open.

"Individuals who display VGP may play an important role within the future study of emotion and emotional regulation, as the role of the ANS integrated within the physiology and experience of visceral emotions (shock, awe, being moved, fear, panic, disgust, etc.) is potentially illuminated by individuals with rare or unusual physiology," the study explained. Another recent goosebump development from the University of Melbourne centers around their potential to treat disease. Researchers found that goosebump muscles actually contain stem cells, which means they might not be so useless after all.

Overall, getting goosebumps is kind of like an internal safety mechanism, which is good. However, since it reacts based on outdated information, its not that reliable. Because, as you know, your hair standing on end doesn't necessarily mean you're in danger. The bottom line: If you get goosebumps on the reg, you probably would have fared well hundreds of years ago, and your body is full of healthy stem cells — something that actually is useful today. #TheMoreYouKnow