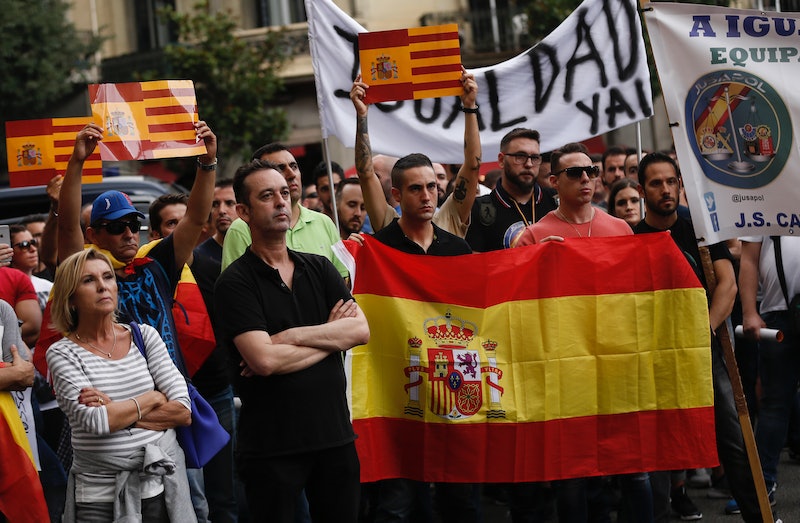 Police from Madrid will attempt to forcibly stop a vote for independence from happening on Oct. 1 in Catalonia, a northeastern region of Spain. Boasting the internationally beloved city of Barcelona, Catalonia has long celebrated its distinctive history, apart from the rest of Spain. Catalan President Carles Puigdemont has been working for two years towards Sunday's independence vote, but it now seems unlikely that Catalans will be allowed to freely cast their ballots. Which raises the question for many readers: Why does Catalonia want to leave Spain in the first place?

The Catalans have celebrated and recorded their own distinctive heritage for 1,000 years. In fact, Catalonia has had some degree of autonomy for most of its history as part of Spain.

But the events of the past century are almost certainly the main factor driving the Oct. 1 vote for independence. Prior to General Francisco Franco taking over control of Spain and proceeding to rule as a dictator from 1939-1975, Catalonia had a mostly autonomous say over its own political dealings. Then, following Franco's death, Catalonia was once more granted autonomy with the passage of the 1978 Constitution.

The pro-independence party of Puigdemont was voted into power in 2015, on the explicit promise that they would hold a referendum on Catalonia's independence. The Catalan government therefore feels it has the right and the obligation to follow through and allow the people of Catalonia to let their democratic voices be heard.

That brings up a crucial distinction. Because while 71 percent of Catalans want the vote on independence to go forward, just 41 percent of those surveyed planned on voting "yes" on the question of leaving Spain to form a separate Catalonian state.

So while Catalans by and large feel Madrid is imposing on their democratic right to vote on independence, it is by no means guaranteed that said vote would result in a majority choosing to separate from Spain.

It's not the only way Catalans feel they are being mistreated by Madrid. In 2010, the Constitutional Court stripped Catalonia of some of its regional decision-making powers, and removed language from a 2006 statute describing Catalonia as a "nation." That move upset many in the region.

A second primary complaint of pro-independence Catalans is the issue of money. According to The Economist, the gap between how much Catalans pay in taxes versus what they get in return from government services is no less than €10 billion.

Yet another major dividing factor between Catalonia and the rest of Spain is language. The region has always spoken its own Catalan tongue, and despite decades of Franco's insistence that only Spanish be allowed in any official capacity, a 2001 census found that 75 percent of Catalans speak Catalan, and it was the main language spoken in the region's schools.

The tactics taken by Spain's central government to stop Sunday's vote have taken an extreme turn. Thirteen people have been arrested after allegedly being involved in planning to carry out the vote for independence. Police sent from Madrid have also raided local government offices to confiscate information, including the 10 million paper ballots.

Puigdemont responded to the police raids, saying, "We think the Spanish government has crossed the red line that separated it from authoritarian and repressive regimes.”

The European Union has stated that if Catalonia does become an independent state, it would no longer be part of the EU, and would have to apply for membership like every other nation. For its part, Spain's government has rejected outright claims that Catalonia has the right to vote on independence. “There is no democratic country in the world that would accept what these people are proposing,” Rajoy told journalists. The escalation of tensions between Catalonia and Madrid have made Sunday's vote to leave Spain one that will have the whole world watching.