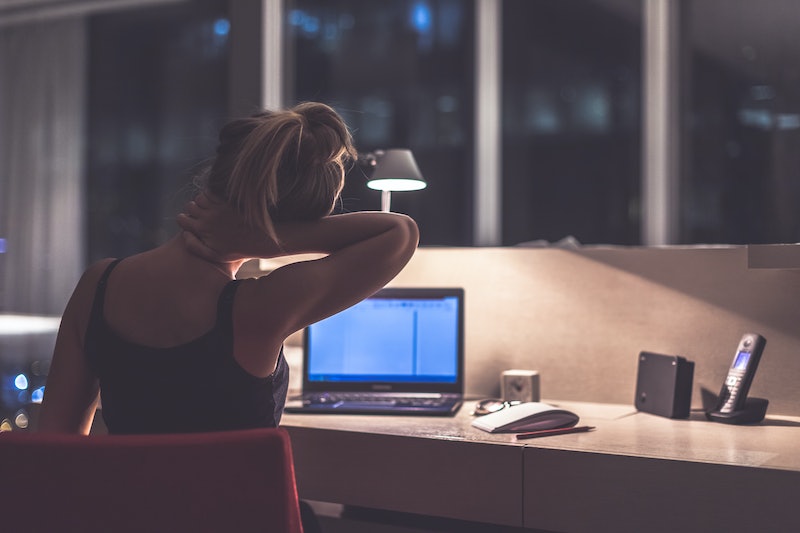 Many of us think of depression as a purely mental health issue, where your mood plummets lower than the bottom of the Grand Canyon and therapy and medication work to stabilize it. However, for a lot of people who live with depression, that's only one aspect of the picture. Depression can also physically hurt, and it's a bit tricky to understand why.

I've experienced depressive episodes for around ten years, and the worst periods always coincide with aching abdominal pain and a feeling of constriction or heaviness around the heart and lungs. It's deeply discomforting and, in an otherwise "healthy" body, slightly confusing. However, the links between the depressed brain and the body are more sophisticated than many of us might have anticipated, and understanding the physical side of my mental health disorder is an important part of treatment. And I've come to discover that this sort of painful experience isn't unique to me; pain is often a dominant sign of depression and other mood disorders, and medicine is still working to understand the intersection of physical symptoms and mental ones in patients with depression.

The link between pain and depression is a nuanced one. Chronic pain patients and those who experience pain from treatments like chemotherapy or arthritis have a high likelihood of developing depression, according Harvard Medical School. But it turns out that many people experience depression through the lens of pain. Depressive symptoms in official diagnostic guides include gastrointestinal issues, poor sleep, headaches, aches and pains with no obvious cause, and sleep issues. But there's something else interesting here: a World Health Organization study found that 69 percent of the depressive patients surveyed across 14 countries initially turned up to their GPs complaining about physical pain, not mood problems. For a majority of those people, the physical side of depression were more disconcerting, not the low mood. Part of this could be explained by cultural constraints on talking about mood and depressive feelings, but part of it is likely that depression, well, hurts.

So why do they coexist? A lot of scientific work has been done on this question, and it's producing some interesting results. A review of the science in 2015 found that there are a few physical links between pain and depression that may explain what happens in the bodies of people with depression. One is that antidepressants involving shifting the levels of serotonin, a neural transmitter, in the brain also seem to help pain levels. That indicates that low serotonin levels, which have been thought to relate to depression for a long time, might also cause pain issues in the body.

Another link? Inflammation, the biological response to potential threats and illnesses. In many depressed people, levels of inflammation are higher than usual. It's been seriously suggested that chronic inflammation levels in patients with depression are behind their pain levels, because inflammation tends to produce pain in the body. The culprits are neuroimmune mechanisms, which connect the immune system and the brain, and may be going quietly haywire in people who have depression. If you're asking "how?", it's a good question — and science doesn't quite have answers yet. But researchers have discovered that stressful events that can set off depression, like grief, tend to impact the immune system, too.

A third explanation for painful depression came from a study in 2016. It suggested that people with depression experience pain because of something called oxidative stress. According to the study, oxidative stress — which is basically what happens when the body doesn't produce enough antioxidants, leading to cell damage — tends to be at very high levels in depressed patients, and once they're treated, their levels go back down to normal. The study didn't reveal why this happened, but it's a potential explanation worth being aware of.

The reality? Pain from depression is likely caused by several coexisting issues at once. Depression is a complicated condition with many physical and neurological factors. But the good news is that treatments like SSRIs seem to do good work in relieving pain symptoms that are linked to depression. If you are experiencing painful physical symptoms with no obvious explanation, and you experience depression or think you might, don't assume they're unrelated; tell your doctor or therapist and see if you can work out a treatment plan.

More like this
Ashley Benson Revealed The Whole-Body Effects Of Her Anxiety On TikTok
By Stephanie Topacio Long
6 Unexpected Causes Of Post-Workout Fatigue
By Carolyn Steber
I Visited Remedy Place, The Social Club Transforming The Wellness Industry
By Rachel Lapidos
Hailey Bieber Has A "Painful" Ovarian Cyst "The Size Of An Apple"
By Radhika Menon
Get Even More From Bustle — Sign Up For The Newsletter