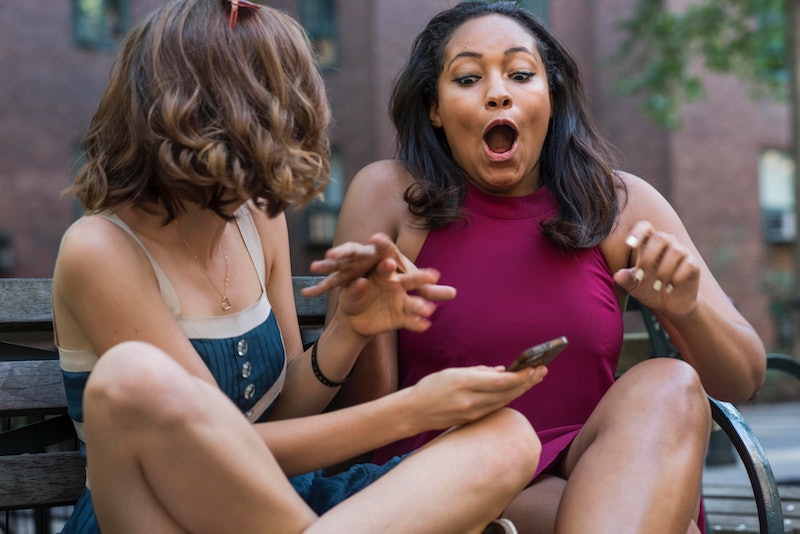 So, you make plans to grab coffee/dinner/drinks with a friend at some seemingly far off date (next week), but when the day arrives you can't think of anything worse than actually going through with it and you cancel. Instant relief. Why does it feel so good to cancel plans? There's actually a few reasons that flaking out is so satisfying, according to experts. One of the reasons is that you might not really want to go in the first place, Psychologist Dr. Maya Borgueta told Apartment Therapy. "We'll say 'yes' to something because we can't think of a good excuse not to go in the moment, but we're really not interested."

My name is Brandi, and I'm a serial canceller, but I wasn't always like this. I've adapted to my environment. In Los Angeles everyone is flakey AF for a number of reasons. For me, while whatever I've agreed to might have sounded fun at first, once the day comes and I think about driving in bumper-to-bumper traffic, finding parking, and mingling with strangers, all I really want to do is stay home and marathon Blindspot.

Another reason Angelenos don't always show up when they say they will is because there are eleventy million things going on every second, and something more desirable might come up, making the original plan less attractive, though I tend to avoid this kind of cancelling unless the other activity involves Lady Gaga. If you love a cancelled plan as much as you love pizza, my fellow flakes, here's why it feels so freakin' good to bail.

How many of those events that you check "going" on Facebook do you actually attend? For me it's about one percent. I check "going" or "interested" because I have FOMO about missing out on something that sounds great, but when the day comes and Facebook reminds me of the things I signed up for, I am already over it and my FOMO becomes JOMO (joy of missing out).

Melanie Rudd, Ph.D told Men's Health, "When you make that swap — a potentially boring or nerve-wracking activity for one you’re actually anticipating — your immediate happiness trumps any remorse you might feel." So, if you agreed to X, Y, or Z, plan after a few glasses of wine, but in the cool clear light of day you'd rather have a root canal then show up, that cancelled plan feels like the best thing that's ever happened to you.

2. You Didn't Want To Go To Begin With

While I'm getting better at saying no to things I really don't want to do, sometimes I accept an invitation out of obligation, which almost always results in my cancelling at the 11th hour. According to Borgueta, it's important to be up front if you really don't want to do something. "Letting someone know you're interested but are unsure if you can commit helps keep expectations realistic, and will prevent you from feeling guilty if a cancellation becomes desired," she told Apartment Therapy. While cancelling feels great, you can get that same feeling in the moment if you don't commit in the first place.

3. You Need Some Alone Time

One of the reasons I make so many plans I don't keep is because I tend to put other people's wants and desires before my own, and it turns out this is pretty common. However, as Lisa Firestone Ph.D noted on Psychology Today, prioritizing yourself isn't selfish, it's necessary. One way to make sure you're getting enough down time to recharge is to stop saying yes to things you don't want to do. While it's true that there can be immense relief in cancelled plans, if you say no to begin with you can get that same relief without the dread that comes with agreeing to something you don't want to do in the first place.

4. The Plans Are Not Meeting Your Needs

If an upcoming plan isn't meeting your basic needs of autonomy, competence, and relatedness, it's not worth committing to, Chip Raymond Knee, Ph.D., the director of the Self, Motivation, and Relationship Theories lab at the University of Houston, told Men's Health. Let's face it, there's nothing worse than being out with people you don't jive with at a place that isn't your jam, and feeling boxed in. Sometimes these situations are unavoidable, like work commitments, but you can choose not to put yourself through this kind of fresh hell voluntarily.

5. It's Easier To Cancel Than Ever Before

Another reason cancelling plans feel so satisfying these days is because it's so easy. In the dark ages, before cell phones and texting, people were generally more likely to keep plans because it was harder to cancel, according to Nancy Colier LCSW on Psychology Today. Colier calls our modern-day brush off last-minute itis. "When I make a date to meet with someone these days, in person, there is about a 50/50 chance that the meeting will happen, with most cancellations occurring within an hour of the appointed meeting time," she explained. "Until I see my companion appear in the flesh (not on FaceTime) I expect my phone to light up with either a “Can’t make it” or at the least, a 'Be there in 10' text."

I have a friend who recently moved to L.A., and she couldn't figure out why so many people were flaking on her. It was because she wasn't confirming the plans via text shortly before the agreed upon time, and if people don't hear from you the same day, the plan is not real. One side effect of technology is that it makes it super easy to cancel without having to have an awkward phone conversation. But, if you fail to confirm plans via text, don't be surprised if the person doesn't show up. When it comes to cancelling or confirming plans, texting is your BFF.

6. You Have Social Anxiety

OK, I have social anxiety, which makes a cancelled plan feel akin to winning a Nobel Prize. While going out with a close friend or a group of people I know usually isn't a trigger for me, having to go to something alone in a non-work capacity — where I will be forced to talk to strangers about things like the weather — makes me hyperventilate. One of the worst parts of social anxiety is anticipation, which can quickly turn to downright dread.

"I made myself sick worrying about this. I’m no longer hungry. What am I going to do? I can’t go now," Emily Russin wrote for The Mighty. "I can’t just sit there and not eat. But I have to go. But if I eat, my stomach will get upset. What will he think if I don’t eat? Maybe I’ll just go and order something small. No, that’s embarrassing. I’m just not going to go. But if I cancel, he’s going to be mad at me. I don’t know what to do." For people with social anxiety, a cancelled plan brings immediate, indescribable relief.

You are totally empowered to flake out on plans, but it's important to do it in a way that's considerate. Just not showing up is not an option because then you have wasted someone's time, which is just plain rude. If you can't make yourself get off the couch, cancel at least a few hours in advance. If you're consistently cancelling on the same person, it might be time to reevaluate whether or not you want to continue that friendship.

"There's a sweet spot in the cancelling, not too much, not too little, not too soft, not too hard, and always with seemingly legit reasons why (never claim you've been abducted by aliens or had to spend the afternoon cutting jeans into jorts; never ever say you don't want to see someone, unless you really don't, possibly ever again)," Jen Doll wrote for The Week. Luckily, most of my friends also do their fair share of cancelling, and we all support each other's right to stay home and make jorts, which is a totally acceptable reason to abort a plan. Just make sure you're not consistently jorting on the same person, unless you're making a pair for them too.

More like this
10 Ways To Be More Empathetic To Your Partner
By Raven Ishak and Lexi Inks
3 Zodiac Signs Most Likely To Be The Center Of Attention
By Nina Kahn
18 Personality Traits Of A Cheater, According To Experts
By Carina Wolff and Lexi Inks
Think Your Partner Is Cheating? These Tarot Cards May Confirm Your Suspicions
By Kristine Fellizar
Get Even More From Bustle — Sign Up For The Newsletter