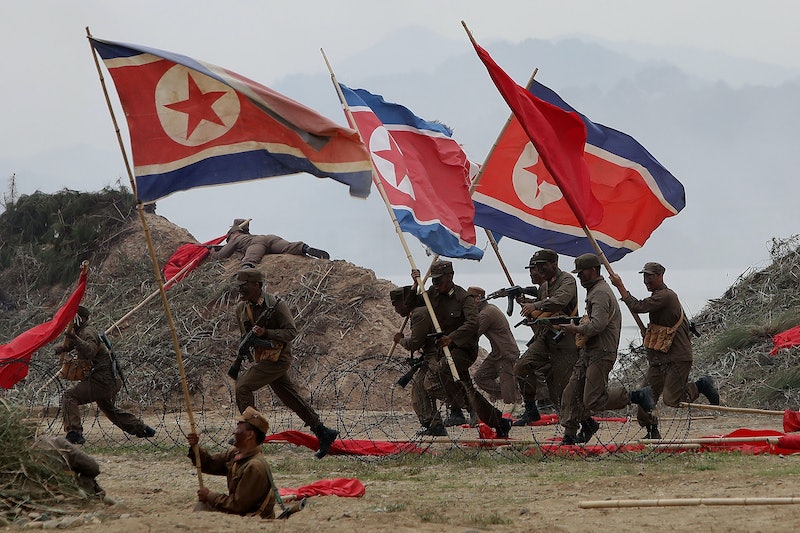 As tensions continue to escalate between the United States and North Korea, it's important to remember that the contentious relationship between the two countries didn't just happen overnight. So what exactly led to the current conflict between the two nations, and why does North Korea hate America? The answer can be traced back to the Korean War.

If you don't exactly remember learning about that particular conflict in your history classes, you're not alone. The Korean War, fought between 1950 and 1953, smack-dab in the middle of World War II and the Vietnam War, is often referred to as "The Forgotten War." Of course, it's relatively easy for Americans to forget this deadly affair because none of the devastation occurred within U.S. borders; rather, the war was fought entirely on the Korean Peninsula, where the United States dropped an estimated 635,000 tons of bombs and 32,000 tons of napalm.

"Part of what has been forgotten is the utter ruin and devastation that we rained down on the North Korean people," John Delury, a professor in the international relations department at Yonsei University in Seoul, told The Washington Post. "But this has been ingrained into the North Korean psyche."

This devastation began when the Korean Peninsula was divided into two parts after WWII. North Korea was separated from South Korea by an arbitrary line, and each side had different allies. The North was backed by the Soviet Union, who wanted the region to be communist, and the South was backed by the United States, who wanted the region to be democratic and capitalist.

But this physical separation didn't last long, and soon these conflicting ideologies and interventions came head-to-head in a bloody three-year war. North Korea, led by Kim Il-Sung (grandfather of Kim Jong-Un), invaded the South in an attempt to forcefully reunify the peninsula. The two sides began battling against each other, with neither side making much progress, until an armistice was signed three years later.

During those three years, the United States caused significant damage to the region in its attempt to stop the spread of communism. American forces mercilessly bombed towns, cities, and villages. They destroyed irrigation systems, crops, and dropped napalm on innocent civilians. The U.S. Defense Secretary at the time, Robert A. Lovett, was quoted expressing little regard for human life in the region.

If we keep on tearing the place apart, we can make it a most unpopular affair for the North Koreans. We ought to go right ahead.

A military captain reportedly said of North Koreans, "The hell with all those people. Let's get rid of all of them." Ultimately, over a million North Korean civilians and soldiers were killed.

These attacks have been ingrained into North Korean identity and politics ever since, and reportedly fuel anti-American propaganda that North Korean children are exposed to at a young age. The county spends a significant portion of its budget on defense spending, according to CNN, which its leaders see as crucial to preventing a U.S. invasion.

Ultimately, U.S. involvement in the Korean War was a significant factor that has led to the threat of nucelar conflict between the two nations today. According to North Korean state media, the country's leader, Kim Jong-Un, recently visited a memorial dedicated to North Korea's casualties in the war, and reportedly made it clear that the United States still has a price to pay for the devastation it contributed to decades ago.

No matter how crafty the U.S. imperialists become in their moves to cover up their crimes, they can never erase the traces of massacre of Koreans left in this land.