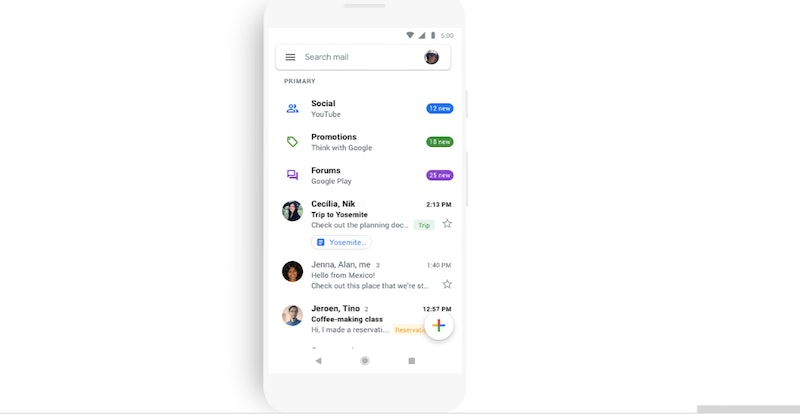 Once upon a time, there were days when a lot of our emails probably included tons of numbers, the name of our celebrity crush, whatever sport we played in middle school, or some random nickname we had. We'd used emails to forward chain messages to friends and had signatures at the bottom of them. Now, in 2019, most of us use emails strictly business or school — and Gmail is the most popular email service in the US, with one billion active monthly users around the world. If you're a fellow Gmail user, you're about to see major changes on the app pretty soon — if you're wondering why your Gmail app looks different, it's because Google is giving the platform a serious makeover.

The new design includes a number of features programmed to allow users to navigate the app as smoothly and efficiently as possible. Among these features is an update that will enable you to quickly view email attachments "without opening or scrolling through the conversation," as well as one making it way easier to switch between personal and work accounts while using the app. Google also wants to make keeping an eye out for spam or virus-harboring emails a breeze, incorporating "big, red warnings to alert you when something looks phish-y" into the platform.

Google's press release on the all-new Gmail app updates explains that the initiative is "part of a larger effort to make G Suite look and act like a family of products, designed in the Google Material Theme with ease-of-use in mind." It's aiming to make all of its platforms — whether you're accessing them via a phone, tablet, or desktop computer — streamlined, familiar to customers, and simple to use. The company is known for its minimalistic interface, and it seems like it's taking it a step further by improving the usability of the Gmail app. It's something that most of us use every single day, so the updates should come as great news for active users.

Google has already updated the web experiences for Gmail, Drive, Calendar, and recently, Google Docs and Sites. Now, it's shifting its focus to fine-tuning the functionality of the app counterparts of those frequently used sites. I don't know about you, but being able to quickly switch from Google Drive or Gmail on my laptop to my phone makes life so much easier. The company reported that we'll be able to see Gmail's new mobile design on iOS and Android in the coming weeks, and hinted towards updates for more G Suite apps in the near future.

If you're curious to know what Google has in store in terms of new features and platform updates, you can head to this interactive calendar that shows you exactly when new stuff is set to be released. In February, for example, you can look forward to seeing more language options available for the 2019 Calendar Template in Sheets (including Brazilian Portuguese, Filipino, Hindi, Swedish, and more). Keep your eyes peeled for Google's updates as we get further into the new year — it's safe to say it will always have an interesting release or two up its sleeve.

More like this
Why Everyone Is "Soft Tagging" Friends On Instagram Right Now
By Alexis Morillo
Here's How To Get Your iPhone To Update Automatically Forever
By Emma Carey
Hinge Added A Video Prompt Feature, So Get Your Camera Rolling
By Hannah Orenstein
How To Use Hobnob To Host Your Next Party
By Emma Carey
Get Even More From Bustle — Sign Up For The Newsletter