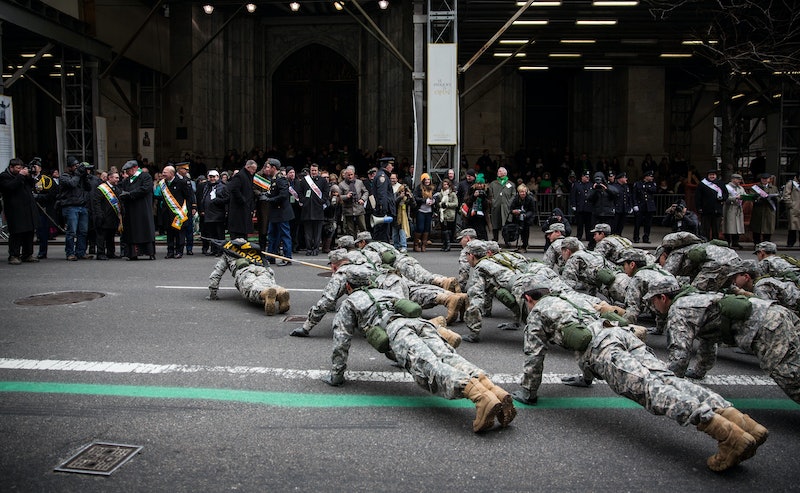 Donald Trump announced in a series of tweets on Wednesday that transgender Americans would no longer be permitted to serve in the U.S. military "in any capacity."

After consultation with my Generals and military experts, please be advised that the United States Government will not accept or allow Transgender individuals to serve in any capacity in the U.S. Military. Our military must be focused on decisive and overwhelming victory and cannot be burdened with the tremendous medical costs and disruption that transgender in the military would entail.

However, contrary to Trump's claims, the military's spending on transgender service members pales in comparison to military spending on actually wasteful projects.

According to The Guardian, the Pentagon spends roughly $6 billion every year on healthcare for active service members. In contrast, the estimated gender transition-related healthcare costs for active transgender service members are only a small percentage of the overall budget — a figure that falls between $2.4 million and $8.4 million, according to a 2016 study commissioned by the Defense Department. The RAND Corp. study found that extending such care options to transgender personnel would only increase healthcare costs by 0.04 to 0.13 percent. In fact, even Trump's visits to Mar-a-Lago cost taxpayers more than medical expenses for transgender military members would.

Trump's transgender military ban directly contradicts his campaign promise to safeguard protections for LGBTQ Americans. Another example of this contradiction came earlier this year, when his administration rolled back protections for transgender students. What Trump and his administration now need to recognize is that the military's expenditures on other things — from Viagra to additional F-35s — far outweigh potential costs of healthcare for trans members of the military. Here is a look at six ventures that cost the military more than trans individuals.

According to The Washington Post, the military spends roughly $41.6 million each year on Viagra for erectile dysfunction prescriptions — approximately five times as much as the estimated cost of healthcare for transgender military personnel.

Bloomberg reported last month that the F-35 fighter jet program is the most expensive weapons system funded by the Pentagon — and F-35 costs only continue to rise. At the end of 2015, lawmakers approved a $1.8 trillion spending bill that included $1.33 billion for 11 additional F-35s. But as the Government Accountability Office discovered, these fighter jets are not cost-effective, and they also have a host of operational problems that have not yet been resolved.

Chelsea Manning called out the Trump administration and the military for prioritizing these expensive fighter jets over the comparatively inexpensive healthcare costs for transgender members of the military.

Like the F-35s, the Navy's Littoral Combat Ships have been criticized for their cost ineffectiveness and operational problems. According to Forbes, the LCS is designed to operate close to shore, but a new LCS broke down at sea less than two years ago.

Moreover, the GAO has released scathing criticisms of the LCS program. Back in 2014, two new ships estimated to cost $220 million each were approved, but they ended up costing almost $900 million more than they were supposed to.

A detailed ProPublica report from 2015 found that the Pentagon wasted at least $17 billion in taxpayer dollars in Afghanistan. In addition to $3.6 billion in outright waste, here are a couple of other things that money went toward supporting: projects that couldn't or wouldn't be sustained by Afghans following the U.S.' departure, and an extremely ineffective counter-narcotics program that did nothing to stop the exponential rise in heroin production in Afghanistan.

According to Business Insider, the U.S. military maintains over 700 military bases in 130 countries around the world. President Obama wanted to close bases that were no longer useful or necessary — a proposal still maintained by the military — in order to save up to $2 billion each year, but Congress has routinely denied this request.

According to POLITICO, needlessly protecting these bases is one of the largest sources of waste in the defense budget. Furthermore, the $2 billion that could be saved from just one round of base closures could pay for transgender service members' healthcare hundreds of times over.

Back in 2015, Congress transferred the Navy's nuclear ballistic submarine costs to a special account separate from the traditional shipbuilding budget. The Navy and its congressional bankers insisted that this was done to save money, but what the "National Sea-Based Deterrence Fund" really does is ensure that the Navy does not have to pay for its $96 billion submarine replacement program all by itself.

Arizona Sen. John McCain recognized that the fund was a budget gimmick at the time of its inception; he made it clear that moving money between accounts does not actually increase the amount of money available. But while the Navy enjoys the privilege of reallocating these costs outside the budget, the president seems to think that it is transgender members of the military who would incur the most expenses.

It is clear from this brief list of expenditures that the military routinely incurs costs much higher than those estimated for transgender personnel, and these costs are often the result of wasteful or excessive projects. Trump's decision to prevent trans people from serving in the military, therefore, has perhaps less to do with saving money and more to do with political gains.