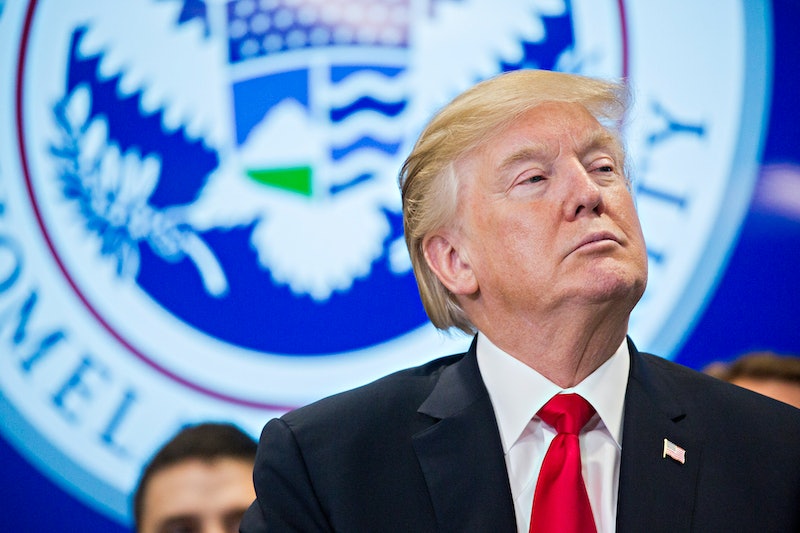 Military parades in Washington, D.C. are a historical rarity for the United States. But that hasn't stopped President Trump from reportedly ordering a display of armed forces to be held in the nation's capital this summer. And some speculators think there's a clear reason why Trump wants a military parade: to project power.

The president regularly touts his support for the military, and that's the official rationale offered by White House Press Secretary Sarah Huckabee Sanders.

President Trump is incredibly supportive of America's great service members who risk their lives every day to keep our country safe. He has asked the Department of Defense to explore a celebration at which all Americans can show their appreciation.

Trump seemed impressed, even awed, by France's annual Bastille Day parade when he visited French President Emmanuel Macron last year. "It was one of the greatest parades I've ever seen," he said at the time. Now, Trump has ordered the Pentagon to figure out how to top what he witnessed in Paris.

But for many, the optics of military tanks and heavy weaponry rolling through Washington, D.C., are anathema to America's culture of democracy. The sight of such a parade is all too reminiscent of similar marches held at the behest of dictators and despots.

"By his own admission, then, Trump is engaged in a familiar, mine's-bigger-than-yours, macho competition, with military hardware his chosen measure," writes Jonathan Freedland at The Guardian. Freedland notes the similarity of Trump's desire for a "parade like the one in France" to his tweets taunting North Korea's Kim Jong-Un, bragging about the size and usability of his nuclear button.

According to Freedland, the demand from Trump for a military parade is either evidence of his stunning immaturity, or, more darkly, of his "authoritarian instincts." Referencing Trump's past complimentary remarks about anti-democratic leaders such as Vladimir Putin, Freedland writes it comes as no surprise that the president wants "the kind of military display more associated with Moscow or Pyongyang than Washington D.C."

Chris Cillizza at CNN seems to think Trump's desire for a military parade is a result of the childishness Freedland admits might be the driving motivation. Cillizza writes that Trump wants the parade "because he saw the one France put on and thought: 'We need something bigger.'"

Bigger is always better in Trump's world. And might usually makes right. He with the biggest toys wins.

Cillizza seems to doubt that Trump is aware enough of history to intentionally co-opt the use of a military parade to broadcast some hidden strongman aim.

[Trump] also seems unconcerned of the sort of message a parade of tanks, guns and other military paraphernalia through the Washington streets sends to the rest of the world that will, most definitely, be watching.

Trump will have to justify spending the millions it would require to transport the military and equipment to Washington, D.C., and to subsequently parade it through one of the busiest cities in the nation.

On that front, Trump has already been met with a logistical challenge. The Council of D.C., the legislative body for the District of Columbia, trolled the president on Twitter. The organization's official account wrote that its government and public schools would open up on time, but "Sadly, the Giant Tank Parade is cancelled. Permanently."

Still, everyone might want to prepare for the parade to go forward. As Freedland astutely observes, there are plenty of citizens who will admire such a display of national strength and patriotism, as the military holds a unique place of respect and honor in the minds and hearts of millions of Americans.

It will be difficult to criticize the parade without coming across as anti-military, which Freedland sees as a prime challenge for those who oppose Trump's ambition to bring tanks through D.C.