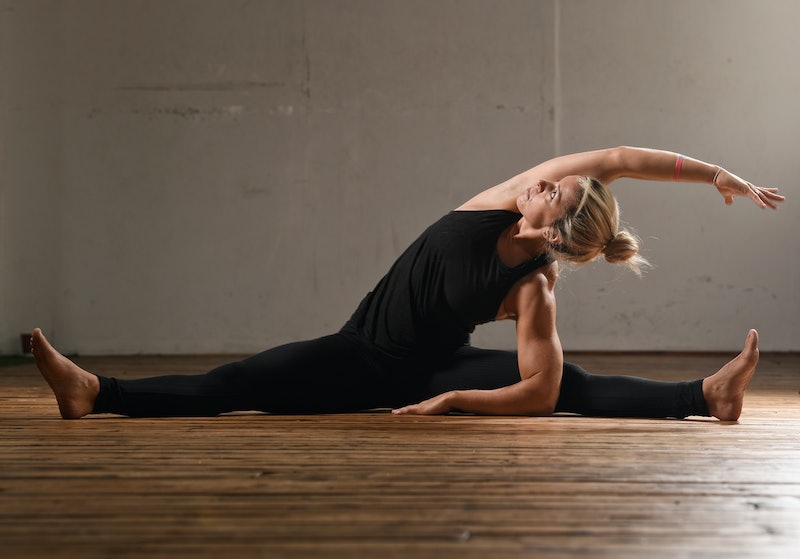 You're probably familiar with the experience of leaving a yoga class, feeling as if a giant weight has been lifted off your shoulders. It's no secret that yoga makes you feel calm, but you may have wondered why the stretching, the meditating, the deep breathing, makes you feel so calm.

Yoga — which is believed to have been around for several thousands of years — combines controlled, deep breathing, a series of stretches, and mindfulness. The goal of yoga is to create a sense of harmony and connection between your mind and body. One of the most sought after benefits of yoga (by both participants and medical professionals treating patients) is the tranquility and clarity it fosters. And though some people attribute that sense of calm to the age-old mysticism of the practice, science is beginning to determine exactly why yoga makes us feel calmer, and what effect it has on our minds.

“Yoga makes you feel more calm and relaxed because we use breathing techniques, such as diaphragmatic breathing — also called Ujjayi breath — that helps to take us out of the sympathetic nervous system, and moves us into our parasympathetic response (aka, rest and digest),” Alia Sebben, a certified yoga instructor and creator of the Yoga for Mental Health series on the Yoga Studio App, explains to Bustle.

Research has even shown trauma-sensitive yoga can be beneficial for people with post-traumatic stress disorder (PTSD) — a mental illness characterized by the overactivation of the sympathetic nervous system. Sebben says that “your physiology is at ease through this act [of diaphragmatic breathing],” which is why it may be so helpful to even those with mental health issues.

What’s more, like most forms of exercise, CNN reported yoga can boost your body’s production of two hormones essential to cultivating happiness, health, and feelings of calmness. Oxytocin, aka “the cuddle hormone,” can make you feel closer to your loved ones, decrease your stress, and improve your overall wellness. Endorphins are another type of hormone that’s released when you practice yoga; similarly to oxytocin, endorphins play an important role is managing physical pain and negative emotions.

Furthermore, studies have even found different types of yoga can increase your body’s melatonin production — a hormone that, according to the National Sleep Foundation, helps regulate your sleep cycle. So, with all three of these hormones in play, it’s no surprise that yoga creates a feeling of inner peace, and stillness.

Another aspect of yoga that's responsible for the sense of calm it gives many people is the incorporation of mindfulness and meditation in the practice. “The mindfulness approach [to yoga] helps to take the focus out of the mind and whatever may be causing stress, and brings the focus to your body,” says Sebben. “How many of us feel like we’re all consumed — especially under stress — and that we only exist in our thoughts? Yoga helps to create balance [between mind and body].”

The Washington Post reported that, though there is some debate among mental health professionals and research as to the efficacy of mindfulness and meditation, some studies have discovered that they can positively impact how different areas of our brains communicate and light up — thus, decreasing anxiety and promoting relaxation. Moreover, SELF revealed in 2016 that one study study conducted on meditation discovered the practice lowered levels of inflammation in the body. Inflammation is believed by many scientists to be the root of many chronic mental and physical illnesses, including disorders like anxiety and depression. By effectively reducing inflammation — through exercises like yoga — you may also reduce the amount of stress you’re managing.

While attending yoga classes can be pricey depending on where you live, Sebben says you don’t need to fork out a bunch of money to receive the calming benefits of yoga. There are tons of low-cost apps, like the Yoga Studio App, or even YouTube videos that can help you start a practice. Additionally, Sebben recommends this low-impact move to destress. “Take [your] legs up the wall. Scoot your seat up against a wall, and slide your legs up — creating a 90 degree angle — torso resting on the ground. This posture is like the forward fold, a gentle inversion. And it helps to regulate blood pressure, and leaves you feeling overall wonderful,” Sebben explains, adding that you can also practice a yoga technique called grounding by simply walking barefoot in the grass, and matching your pace to your breath.

In the end, Sebben says that, “Yoga teaches us how not to be a slave to our thoughts, and to live in the present moment. It may sound like a tall order, but by focusing on your breath right here, and right now in this very moment — you are connected to ‘the now.’” While yoga may not be for everyone, science shows it can absolutely be a therapeutic tool for those looking to unwind, de-stress, and create more calm in their lives.