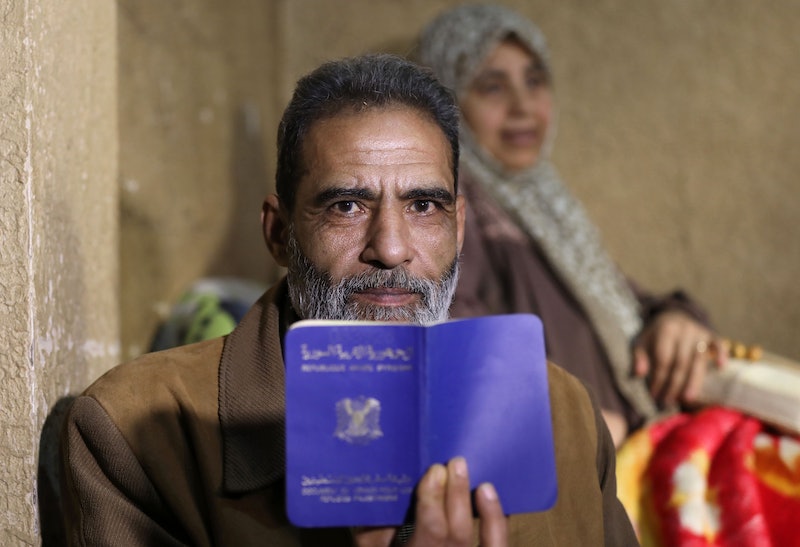 On Wednesday, President Donald Trump's administration released a draft of an Executive Order that, among other things, prohibits Syrian refugees from entering the United States as well as seeks to temporarily ban the United States from accepting more refugees from any country. While Trump's refugee ban is supposedly intended to reduce terrorism, it is completely misguided. The odds of refugees committing terrorist acts in the United States are exceedingly low, especially when compared to the rate at which white Americans commit acts of terrorism.

Trump's proposed executive order is entitled "Protecting the Nation from Terrorist Attacks by Foreign Nationals." Among other proposals, the draft suggests that, once executed, the United States would completely halt its refugee program for 120 days while refugee vetting procedures are evaluated; following the vetting process, the order would drastically cut the number of refugees allowed in the United States in 2017 from 110,000 to 50,000. Furthermore, it would, according to the New York Times, indefinitely block the admission of Syrian refugees to the country.

Essentially banning Syrian refugees and temporarily halting the U.S. refugee program is an absolutely misguided and inaccurate response to reducing terrorism in the United States. Indeed, according to the Cato Institute, from 1975-2015, only three out of the 3,252,493 refugees admitted to the United States during this 40-year time period have executed fatal terrorist attacks, which have killed a total of three people. Moreover, these three refugees were Cuban and committed the terrorist acts in the 1970s prior to the creation of the 1980 Refugee Act, which greatly enhanced refugee screening procedures.

Indeed, the Cato Institute asserts that an American's odds of being killed in a terrorist attack committed by a refugee in the United States are astonishingly low, at 1 in 3.64 billion per year. Rather than refugees (or foreign nationals for that matter), the most significant terrorist threats in the United States actually come from white Americans born in this country.

Moreover, a 2015 survey conducted by the New York Times reported that law enforcement agencies across the United States perceive domestic, right-wing extremism as a far more severe terrorist threat than foreign-led extremism. In describing the findings of the New York Times' survey, ThinkProgress reported that Americans are "7 Times As Likely To Be Killed By A Right-Wing Extremist Than By Muslim Terrorists;" the latter group, of course, largely excludes refugees, who have not committed a fatal terrorist attack in the United States in over 30 years.

Overall, white Americans are more likely to commit terrorist attacks in the United States than both foreign nationals as a whole and the refugee subset. It is particularly egregious to suggest that refugees are responsible for terrorist attacks in the country because, aside from the fact that they largely are not, refugees are people who are fleeing persecution and violence in their home countries, not people seeking to instigate violence in the United States.

In reality, the Trump administration should look inward and recognize the very real threat of domestic terrorism as well as focus its external anti-terrorism efforts away from the refugee population since refugee screening is already so comprehensive.

The refugee ban sadly only serves to prevent people who desperately need a safe haven from entering the United States, and does little, if anything, to protect Americans from terrorism. It would serve the Trump administration well to strongly reconsider its stance on the U.S. refugee population.

More like this
Iran Has Issued A Death Sentence Over Mahsa Amini Protests
By Catharina Cheung, Darshita Goyal and Maxine Harrison
Here's The Role Lady Susan Hussey Played At Buckingham Palace
By El Hunt
What To Know About Martin Bashir After Watching 'The Crown'
By Bustle UK
Read Dan Levy's Heartbreaking Message After The Club Q Shooting
By Stephanie Topacio Long
Get Even More From Bustle — Sign Up For The Newsletter