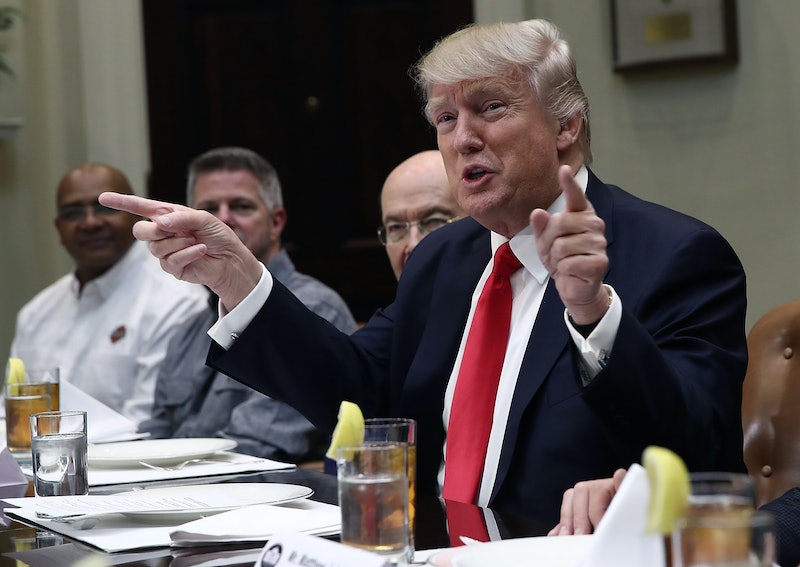 A federal judge in Washington State issued a temporary restraining order on Friday blocking President Donald Trump's controversial travel ban that barred migrants from seven countries from entering the United States. The ruling didn't go over so well with the president. Trump ranted about the travel ban decision in a series of blustery tweets Saturday morning. Although Trump is already well known for his degrading language and trigger-happy Twitter presence, these tweets about the travel ban ruling may be his scariest yet.

"When a country is no longer able to say who can, and who cannot , come in & out, especially for reasons of safety &.security - big trouble!" Trump wrote on Twitter.

Trump then singled out Robart, though not by name. Trump called Robart a "so-called judge," mocking his status as a federal judge presiding over the U.S. District Court for the Western District of Washington. Robart was appointed to his position by President George W. Bush, and has been serving in his current post since 2004.

On Twitter, Trump accused Robart's ruling of taking "law-enforcement away from our country." He then called the ruling "ridiculous" and vowed that it "will be overturned!"

Trump's response to the first, most serious pushback of his administration is telling. His blustery, rash response to Robart and his ruling is not only worrisome, but dangerous — perhaps more dangerous than his repeated denigration of media outlets as "fake news." Trump's mocking of a federal judge as a "so-called" arbitrator and defender of the Constitution is ultimately a dismissal of the checks and balances set in place to stop the executive branch from gaining too much power.

And what's most striking about Trump's decision is that he can't even feign some respect or humility for the federal court and Robart. It's customary, at the very least, for president's to say "we respect the court's decision" when rulings don't go their way. (If Trump needs some guidelines, perhaps he should look to former Presidents Obama and Bush.)

As many of Trump's critics have pointed out over the last few months, Trump and his administration appear to be leaning closer and closer to fascism. But is Trump a fascist? That word should still be carefully applied, but his latest Twitter reaction has caused some concern.

Does Trump think he can overturn a federal court's ruling? According to the official statement from the White House, it's clear Trump's administration is gearing up for a showdown between the executive and judicial branches. But what's not clear is Trump's understanding of how the court system works in America — and that he just can't circumvent a federal judge because he doesn't like the ruling.

What Trump critics are on the lookout for now is how the defiant president will respond once this legal challenge over the constitutionality of the travel ban makes its way up the court system. If the Supreme Court eventually rules on this ban, will he deem SCOTUS a "so-called court" full of "so-called justices?" Will he treat the Constitution as if it is random and arbitrary and can be changed at his whim?