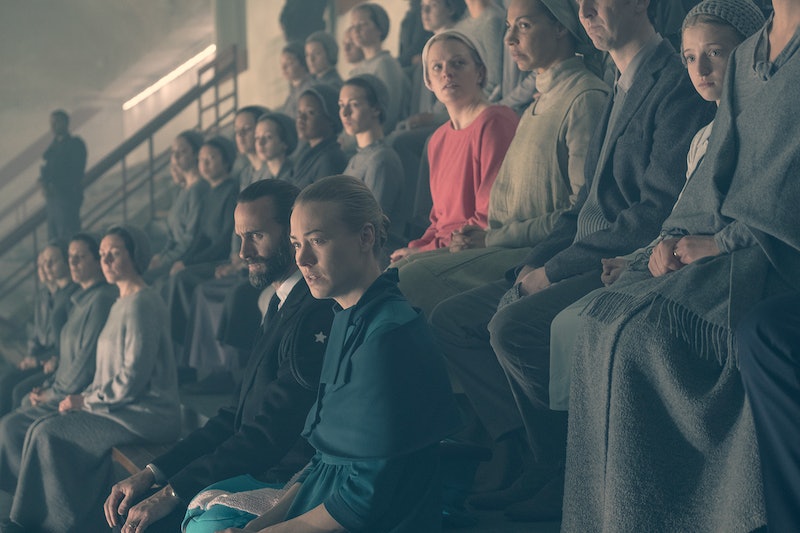 Spoilers ahead for Season 2 Episode 12 of The Handmaid's Tale. One Handmaid's Tale character met an untimely end this week, and though she wasn't necessarily a huge focus in the story overall, her death could have lasting repercussions on other characters. Eden is found this week after she runs away with her lover Isaac and a massive search party is sent after them. They are executed in a grisly fashion for being "sinful" and betraying Nick, Eden's husband, and Serena's reaction to Eden's death on The Handmaid's Tale could mean that she won't be as supportive of Gilead's rulers moving forward.

Eden definitely held a lower rank in society than the Waterfords, but she was still a staple of their home, and Serena had grown close with her, particularly in this episode when June's baby arrived. Eden holds the baby early in the episode as she talks about motherhood with Serena, and the makeshift bond they share is clear.

Eden is the perfect example of someone who should be Gilead's poster child. She tries tirelessly to be a good and dutiful wife, and won't compromise her religion for anything. Even when Nick begs Eden to lie to the authorities, to say Isaac took her against her will, or to say that she's sorry and she regrets her supposed sins so she might be spared, she won't do it. Eden is a girl who always strove to be as diligent and godly as she possibly could be, and that continues even as she faces death. Nick tries to tell her that the truth doesn't matter, but she won't have it. "It matters to God," she says. "He knows what's in my heart."

"All I wanted was to make a real family," she continues. "Isn't that what Gilead wants of God's servants?" Even as she faces her own demise, Eden still asks Nick for his forgiveness after she tells him that she doesn't want to have his baby, and recites a prayer to calm and comfort him. It's clear that she's just a teenage girl who's struggling to come to terms with her relationship to God, and only wants to do what she thinks she's supposed to. And yet, even she isn't good enough under the strict rule of Gilead.

As the others in the district — even Eden's own family — watch in horror, Eden and Isaac are forced to jump into a swimming pool with weights attached to them. Everyone is shocked and horrified, even though they knew what was coming, and Serena in particular has a reaction that suggests this might not be the world she wants to live in anymore. She sobs and looks on in disbelief, her hands clasped against her face, and still hasn't recovered later that night when June visits her in the baby's room.

If someone as good-hearted and willing to bend to God's rule as Eden can't thrive as a woman in Gilead, then really, who can? This has to be a concern of Serena's now more than ever. Though June's child doesn't truly belong to her, Serena thinks of herself as its mother now, and likely also considered her relationship with Eden as that of almost an adoptive parent. She welcomed Eden into her home, gave her motherly advice, and tried her best to guide her, but still has to watch as she receives the ultimate punishment.

June's baby will probably have a greater measure of protection than Eden did because she'll be considered a Commander's daughter, but she's still a girl. Serena seems more troubled by Gilead's laws than ever before in this episode, and it's not hard to see why. Now she's got a young girl directly in her care, and she'll have to reckon with how much power she actually has to protect her. It would be hard — maybe even impossible — for Serena to redeem herself in any significant way after the atrocities in which she's been complicit, but Eden's fate could be the spark that finally convinces her that no woman can have a truly good life in Gilead.