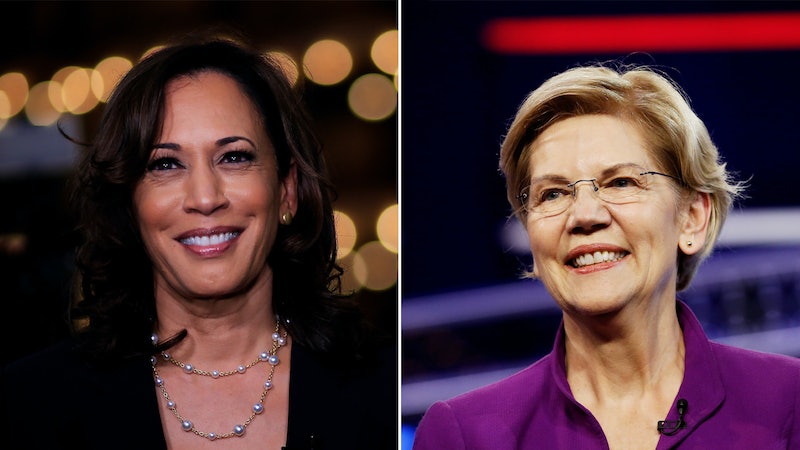 Last week marked the first time that leading Democratic presidential candidates took to the debate stage, and for several of those hopefuls, the two nights proved very significant. This was especially the case for Sens. Kamala Harris and Elizabeth Warren, whose post-debate poll numbers quickly spiked upward. Gender and politics experts tell Bustle the reason for this increase is pretty simple.

"I definitely wasn't surprised to see their spike in the polls because I think on their respective nights, in many ways, they won their nights," says Lisa Burns, Ph.D., a professor of media studies at Quinnipiac University.

Although neither Harris nor Warren got the most minutes of speaking time during their respective debate nights, both are skilled public speakers, and Burns believes they provided some of the most substantial contributions to the conversations. She points to Warren's reputation as a "policy wonk" and Harris' ability to present talking points in a way that doesn't come across as overly contrived.

"It was very clear that they were comfortable on that stage," Burns says.

According to a CNN/SSRS poll, Warren and Harris rose 8 and 9 points, respectively, in the network's primary polling immediately after the debates last week. Former Vice President Joe Biden lost 10 points in the same poll, putting him only 5 points ahead of Harris.

It's a pattern seen across post-debate polls. A Quinnipiac University poll showed Harris jumping from 7% support to 20% between June 11 and July 2. In that poll, Biden is barely in front with 22%, and Warren is in third with 14%. A poll of likely Iowa Democratic caucusgoers showed the same three in the lead, with Biden, Harris, and Warren at 24%, 15.6%, and 13%, respectively.

While this appears to be a net good for the Warren and Harris camps, experts caution against being too credulous of polls this early in the game.

"It is way too early for polls right now," says Christina Reynolds, vice president of communications at EMILY's List, an organization that works to get pro-choice Democratic women into office. "Polls right now are picking up name recognition and not much else."

That being said, Reynolds also wasn't surprised to see Warren and Harris surge in polling numbers after the pair were given the opportunity to appeal directly to voters. She and others from EMILY's List were already confident in the two candidates' ability to appeal to the Democratic public.

"We've seen them go around and really impress in events around the country," Reynolds says. "But they haven't gotten the same amount of media attention [as other front-runners], and we knew that once they did, their popularity would start to grow."

"The strong debate performance of Sen. Warren and Sen. Harris boosted their poll numbers, in part because they had the opportunity to showcase their expertise and make the argument to voters that they have the political skills to implement their policy goals," says Nicole Shoaf, Ph.D., an assistant professor of political science at Missouri Southern State University.

Virtually every expert who spoke with Bustle highlighted how well both Warren and Harris made use of the very limited speaking time that the debate structure offers candidates. This, they say, probably resonated with potential voters, and likely contributed to their higher post-debate polling figures.

"They both showed an ability to take on key issues, to deal with things coming at them, but also to push back and they showed what kind of candidates they are," Reynolds says. "And that's really powerful."

More like this
Diane Warren Apologizes To Beyoncé For Shading The Amount Of Songwriters On “ALIEN SUPERSTAR”
By Jake Viswanath
Are John Legend & Kanye West Still Friends? The Singer’s Latest Update Is Candid
By Brad Witter
Christina Aguilera Took A Powerful Stand At Brighton Pride
By Sam Ramsden
We’ve All Had Bad Sex. Nona Willis Aronowitz Is Talking About It.
By Sophia Benoit
Get Even More From Bustle — Sign Up For The Newsletter