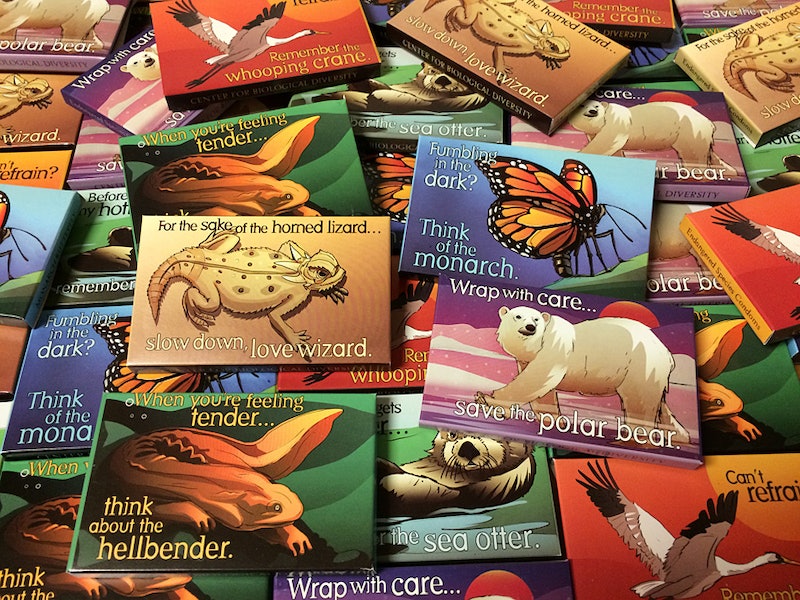 In an attempt to educate lawmakers about the dangers of overpopulation, a group called the Center for Biological Diversity has sent "Endangered Species Condoms" to every U.S. senator. Each condom comes in a box with an illustrated image of an endangered species and a corresponding slogan. ("Before it gets any hotter, remember the otter," for instance.).

“Access to reproductive healthcare is a right all women should have," Leigh Moyer, the Center’s population organizer, said in a press release. "It’s also an essential tool in curbing human population growth so we can save room for the wildlife who share the planet with us."

Plenty of progressive organizations have called either for expanded contraceptive availability or action to fight overpopulation, but the Center is taking a novel approach by combining these two issues. The group stresses that contraception is a basic right, but also links the issue to preservation of the Earth's ecosystem, thus making two distinct arguments in favor of expanded contraceptive access.

"We need to draw the connection between human population growth and the wildlife extinction crisis, but that’s not enough," Moyer said. "We also need to protect straightforward solutions like universal access to contraception for everyone on Earth, starting right here in the United States.”

Other slogans on the condom boxes include "For the sake of the horned lizard, slow down, love wizard," "Wrap with care, save the polar bear" and "Can't refrain? Remember the whooping crane." They were designed and illustrated by Lori Lieber and Shawn DiCriscio, respectively.

"Human population continues to grow at a rate of about 227,000 people per day, driving habitat loss and forcing competition for natural resources," the group claims in its press release. "Wild plants and animals are going extinct at rates 1,000 to 10,000 times the natural background rate due to habitat loss, pollution, climate change and other human-caused problems. The UN recently updated population projections to 9.8 billion people by 2050, an increase of 100 million from the prediction made two years ago."

The extent to which overpopulation is a long-term threat to humanity has been debated for centuries, and there's still no consensus opinion. The Center and other like-minded organizations, such as Population Action International, argue that human population growth decreases biological diversity. More people means more mouths to feed, which in turn means more natural habitats must be disrupted and converted for use in food production.

According to the Center, each senator also received "a letter with the condoms either thanking them for their support of reproductive healthcare and access to contraception or criticizing them for prioritizing tax cuts for the rich over women’s rights and the environment."