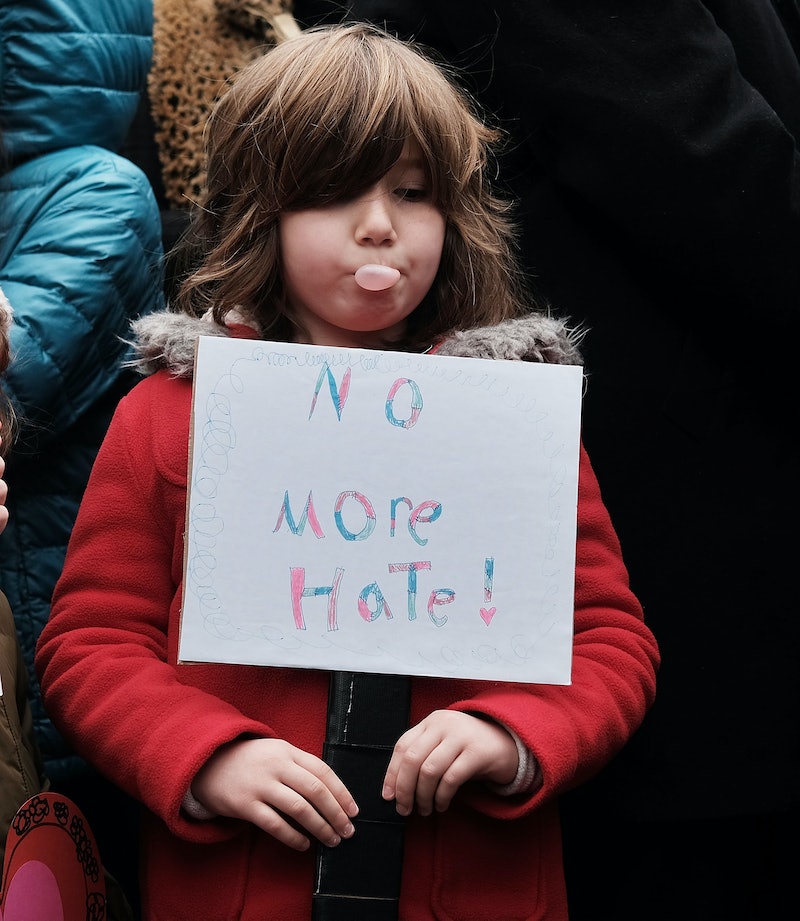 Over the weekend, a Humans of New York-esque, feel-good story began circulating about New Yorkers coming together to scrub away anti-Semitic graffiti on a subway with hand sanitizer. Granted, the feel-goodness of it is arguably tempered by the fact that phrases like "Jews belong in the oven" and "Destroy Israel, Heil Hitler" were reportedly written on the subway in the first place. Nevertheless, it's encouraging to read the story of people uniting in one of the most diverse cities in the country to literally scrub away anti-Semitic garbage.

According to the Facebook post by passenger Gregory Locke, which spurred the subsequent articles, on Saturday night, he got on the subway and "found a Swastika on every advertisement and every window." He added that "The train was silent as everyone stared at each other, uncomfortable and unsure what to do." That was until someone brought up that hand sanitizer removes Sharpie. "I've never seen so many people simultaneously reach into their bags and pockets looking for tissues and Purel. Within about two minutes, all the Nazi symbolism was gone," Locke wrote. At the time of writing, his Facebook post has been shared by nearly 500,000 people.

Locke included a quote from one of his fellow passengers, lamenting "I guess this is Trump's America." But Locke rejected that despair in the conclusion of his post, writing: "No sir, it's not. Not tonight and not ever. Not as long as stubborn New Yorkers have anything to say about it."

By Locke's own account on Facebook, the silver lining to the horrible anti-Semitic graffiti is a rebuke of "Trump's America." Reports about the story have placed the subway incident in the context of coming days after President Donald Trump did not specifically mention Jews in his Holocaust Remembrance Day statement and other ways to connect the incident to his administration, albeit implicitly rather than explicitly.

It is disheartening to see the subway incident politicized, though it's not exactly surprising.

However, the deeply disturbing and frustrating reality is that there is a problem with anti-Semitism on the left as well as the right.

After all, 2016 saw a rise in anti-Semitic incidences in the United States, according to the Anti-Defamation League, with a 50 percent rise in violent anti-Semitic assaults since 2014. The ADL also concluded that during the election, 800 Jewish journalists faced anti-Semitic attacks online. It's no secret that Trump had many prominent and outspoken white supremacist supporters. Considering these facts in isolation, it is easy to see why one would assume that the subway anti-Semitic graffiti came from some rabid neo-Nazi extremist who represented the worst of Trump supporters. Following that logic, one would also assume that the admirable, united efforts of the subway passengers was a rebuke of what Trump (and the Republican party) stands for today.

However, the deeply disturbing and frustrating reality is that there is a problem with anti-Semitism on the left as well as the right. It often seems to get less attention and, frankly, criticism. The Jewish Daily Forward's editor-at-large, J.J. Goldberg, recently wrote about how anti-Semitism in America comes from both political ends and are equally dangerous:

Both strains of anti-Jewish ideology have been responsible for multiple deadly attacks specifically targeting Jews and Jewish institutions on U.S. soil over the past quarter-century, since the uptick began. In fact, according to my own research via FBI data and online newspaper archives around the country, the two strands, far-right and anti-Israel, are both implicated in roughly the same number of such attacks during that period.

This past week in the Washington Post, Yair Rosenberg debunked five myths about anti-Semitism, one of them being "Anti-Semitism comes predominantly from the right." While noting this election brought out a spate of "white nationalists with a penchant for harassing Jewish journalists," he pointed to several examples of anti-Semitism coming from the left at the same time:

At liberal Oberlin College, a writing instructor named Joy Karega sharedFacebook memes about Jewish control of the global economy and media, alongside posts asserting Israeli responsibility for the Islamic State and 9/11. Yet when school officials and others criticized her conduct, the student council dismissed it as a “witch-hunt.” In New York, despite a local outcry, the hip leftist hub Brooklyn Commons hosted Christopher Bollyn, a conspiracy theorist who argued that “Zionist Jews” were behind 9/11. D

I also come at this issue with my own experiences as a Jewish reporter. I have had revolting anti-Semitic comics tweeted at me from people (presumably) on the far Richard Spencer-esque right. I have also had a letter sent to my parents' house from someone (presumably) on the far left, attacking my views on Jewish statehood in a way that was far more severe — and creepier — than a political critique of Zionism.

I've been reporting on anti-Semitism coming from the far left for years and how it has manifested in some of the most progressive, left-leaning communities in America, college campuses. When I think of the New York City subway incident I am reminded of a report I did on anti-Semitism at University of California, Berkeley in 2015. When I asked a UC Berkeley rep about incidences of anti-Semitic graffiti that students were telling me about (and sending me photos of), he initially dismissed them.

"I’ve seen [it] happen on more than one occasion that a group of students with a very specific political agenda will be on the lookout for any specific rhetoric that they can use to the effect to damage the standing of another student group," the rep said, implying to me that there was, perhaps, too much sensitivity on the part of these students. He later called me back to say that once he checked with police, there were reports confirming many of the accounts of anti-Semitic graffiti.

The subway incident this weekend in New York included a specifically anti-Israel message among the Swastikas, "Destroy Israel." I bring that up not to claim that the horrible anti-Semitic graffiti came from someone on the far left. There is absolutely zero evidence that it did — but there's also zero evidence that it came from a far-right Trump supporter.

The fact that we simply do not know the motivation behind the person or people who defaced the New York subway with such revolting graffiti may be the best reason not to consider it — or the response — to be a partisan issue.

However, there is also another. If we're trying to celebrate the subway passengers' response and holding it up as an example of people coming together to fight hate, then maybe we should pause and wonder if casting it as a partisan victory is in line with those ideals.