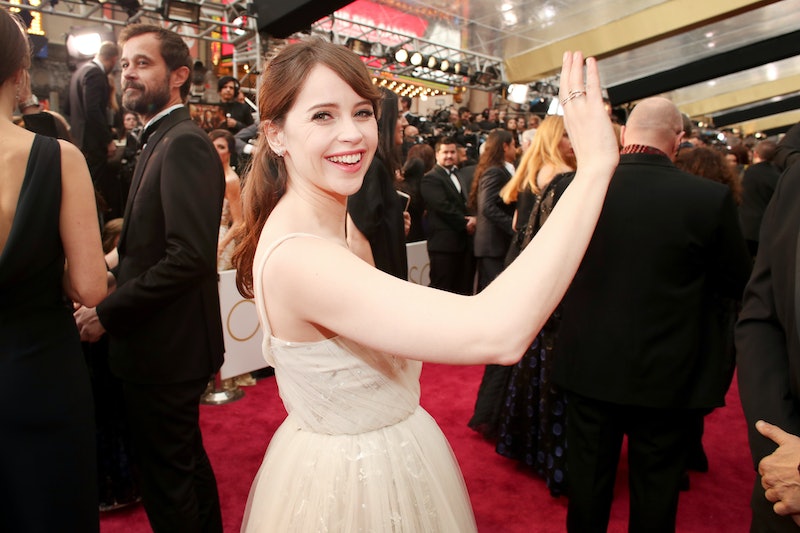 In a final twist before moving forward with production, Variety is reporting that British actress Felicity Jones will play Ruth Bader Ginsburg in the highly anticipated biopic titled On The Basis Of Sex. In 2015, it was announced that Natalie Portman would star in the Ginsburg biopic, and, while it's unclear as to why Portman has dropped out of the project, it's exciting to see Jones being given another opportunity to play a radical hero that women can look up to on the big screen again.

The actor, who was nominated for an Oscar in 2015 for her phenomenal performance in The Theory Of Everything, previously portrayed a formidable hero named Jyn Erso in Rogue One. In that role, she was a rebel rather than a damsel (and was never in distress), and she was capable of organizing and leading an entire resistance. In short, Jones had the spark to her that makes her a thrilling choice of actor to play a real life hero like Ginsburg.

According to Deadline, the script for On The Basis Of Sex follows the numerous obstacles Ginsburg faced throughout her career in her fight for equal rights. In 1993, for instance, she was appointed to become Supreme Court Justice by then-president Bill Clinton, making her the second woman in history to enjoy the honor (after Sandra Day O'Connor). Prior to this, however, Ginsburg was known for her feminist activism, including founding the Women’s Rights Project of the American Civil Liberties Union (ACLU). She also experienced gender discrimination first hand as a working class woman who went on to graduate from law school, and experienced gender discrimination while seeking employment.

Obviously, that's a tremendous legacy for any actor to fulfill on screen. However, as her prior performances have proved, Jones is more than up to the task. And it isn't just her portrayal of previous heroes that makes her an accomplished choice of actor for the role. It's also her politics.

In a 2016 interview with Glamour, Jones proudly confessed to having "always been a feminist" and explained about acting, "What I love in my work is showing a full-sided woman, women who are strong but flawed." In the interview, she was also happy to discuss the importance of speaking up about the need for equal pay, saying:

"I want to be paid fairly for the work that I’m doing. That’s what every single woman around the world wants. We want to be paid on parity with a man in a similar position. And I think it’s important to talk about it... It’s brave of those women to come forward and make a point about it."

As a self-proclaimed feminist who appears to be comfortable with speaking out about issues of gender discrimination, Jones should have the passion and understanding required to do this important role justice (no pun intended, guys). And, as her performance as Jyn proved, she also has the skills needed to make audiences feel stirred up and inspired as they watch her — just as Ginsburg has managed to achieve in her own career.