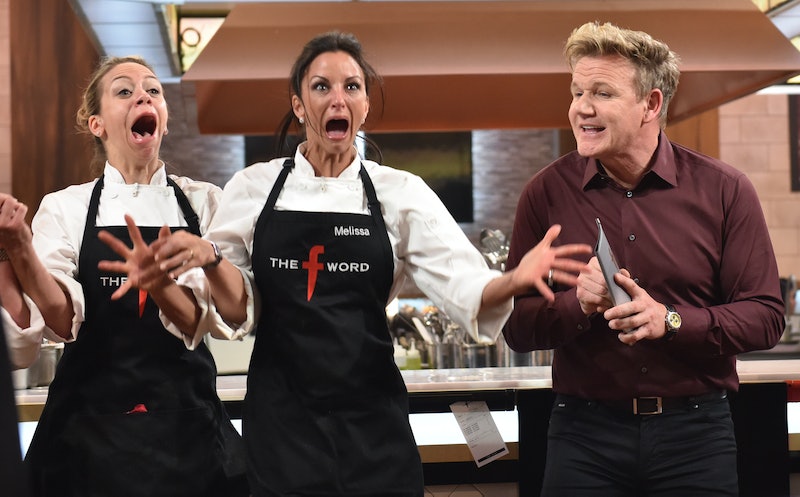 Here's a not-so-hot take: live reality TV shows aren't anything new. Networks produce and air them all the time, so much so that it's really not all that surprising of an accomplishment anymore. But can a network actually pull off a live cooking competition show? Gordon Ramsey is attempting to do just that with The F Word on FOX, but it takes a certain kind of Hollywood magic to make it all happen every week.

Every Wednesday (at 9 p.m. on FOX), award-winning chef Ramsay coaches two teams made up of foodie families and friends who battle it out to win over a restaurant of diners. Tasked with making the same dish, each team hopes that the diners would rather pay to eat their meal instead their opponents', and the winning team moves on for the chance to compete in the finale.

Based on Ramsay's UK series of the same name, the series premiere of the US version of The F Word went off without a hitch. If you watched at home, you saw the Sexy Paesans (a tight knit Italian family from Long Island) go head-to-head against the Spice Boys (four childhood friends from Nashville) as they cooked spiced Alaskan King salmon with potatoes and succotash for all the diners in Ramsay's restaurant. The Sexy Paesans beat the Spice Boys in a rousing victory, and no one swore on live TV. It was an undeniable success.

But you didn't actually see a full hour of live cooking. Instead, the hour was interspersed with pre-recorded footage of Ramsay meeting each team in their hometowns, interviewing celebrities and pulling off fun undercover stunts. I was on set for the live filming of the premiere, and so I actually got to watch each team cooking the same dishes over and over again, and if I was watching at home, I would honestly be pretty bored. It's not like any other cooking show where competitors make different dishes or different courses. It was just salmon, over and over and over again. Pretty repetitive.

Since I actually was in the room, hearing the shouting and smelling the delicious smells, it was exciting. From my couch later that night as I watched the premiere which I had recorded on my DVR? Without the pre-recorded interviews and stunts, I'm not sure anyone would have stuck around for the results reveal. It was smart of FOX to add in other segments instead of just watching Ramsay watch the teams do one thing over and over again.

When I arrived on set, however, I had no idea what to expect. My friend and I were first escorted to the green room where we were treated to some very strong cocktails made by a friendly bartender ready to whip up new creations based on our preferences. We also loaded up on some delicious appetizers, since you never know how long it will be until you're served an actual meal on cooking shows. My previous experience dining at Ramsay's Hell's Kitchen taught me that you might actually never get served dinner if the competitors mess up (I went home hungry, disappointed and very wine drunk that night) so I thought I was prepared for anything.

Then a producer led us to our own personal table on set, and we were shocked to see that we had a table right next to the kitchen, aka we would definitely be on camera for most of the night. Our surprise intensified when another producer came over to walk us through our duties — we were actually going to be interviewed on camera about our opinions on the dinner! We started to get nervous until we figured out we we had been seated at the wrong table, and were then escorted up to the second level overlooking the entire restaurant set where our actual table was. Much better: no chance of getting interviewed or being on camera, and we could people watch and gossip to each other the entire time. Crisis averted!

A half hour before cameras started rolling, the head producer announced that the "kitchen is hot." The two teams walked on set and started cooking with the ingredients all pre-prepared, so it's actually more like an hour and a half of cooking instead of just an hour. We sipped on sparkling water and munched on bread from a bread basket while the crew ran around making last-second adjustments. A producer got on a microphone letting the diners know this was their first live show, and we all had to follow a few rules including no bathroom breaks, no swearing if we were on camera, and most importantly we couldn't focus on Ramsay walking around. We had to act as if this was an actual restaurant and we were all out to dinner like normal.

A minute before cameras started rolling, my friend and I were shocked to see Jamie Foxx walk on set and take a seat at the bar. During the beginning of the show, we saw Ramsay have a chat with him as cameras filmed them. Watching the episode later that night, I realized their "interview" was more like network synergy so Ramsay and Foxx could promote Foxx's Beat Shazam which premiered on FOX the next night (they even had a Beat Shazam chyron on the bottom of the screen prepared even though it was live). That explained why Foxx immediately left after their conversation was over — he wasn't actually there to dine with us plebeians.

But Snoop Dogg totally was! I actually had no idea the rapper was even in the same room as I was since he was sitting at a table with his kids off to the side of the main dining room. That must be the exclusive VIP table. They were served first so they could give their opinions about the food, and not going to lie, watching later that night, I was pretty jealous. You see, my friend and I spent the entire hour watching the teams cook over 80 meals, and other tables getting served and eating happily, but we never actually got served ourselves. I clearly have the worst luck with Ramsay shows.

We did get served two rounds of the signature gin cocktails being made by the on-set bartenders and we practically licked the charcuterie board clean because we were so hungry. And we wouldn't have even gotten served the meat and cheese board if a waiter didn't give it to us out of the planned order that tables were supposed to get food (we looked that pathetic that he took mercy on us). My friend and I passed the time not eating by trying to judge which team was going to win based on the looks of their dishes alone, but we ended up guessing totally wrong. I guess taste really is the deciding factor, and not presentation — as it should be.

But the crazy thing is the two teams weren't judged on completely serving their entire section of diners. They were just judged on approval ratings from those who received dinner. So although some diners like myself didn't get served at all, that didn't penalize the teams in any way. Ramsay is really going for quality over quantity.

So while we left hungry, we were thoroughly entertained ... and now I'm convinced that Ramsay has something against me. The only way to prove me wrong is a personally prepared dinner by Ramsay himself. I'm not reaching too high, right?