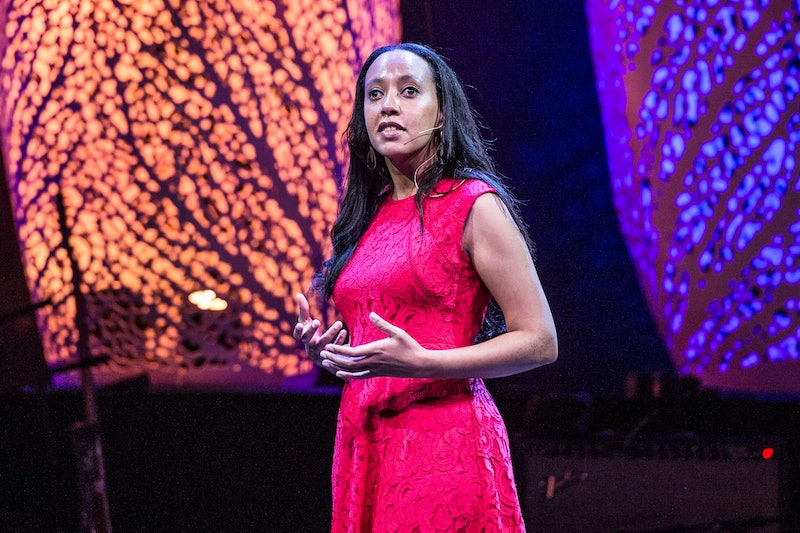 One day, Haben Girma was summoned to the kitchen to help prepare bull meat. She was in Eritrea, her mother's home country, and her family never let her off the hook when it came to chores. She begrudgingly joined some family members at the table, picked up a meat slab, and sliced it into small pieces. Yet, something felt very unusual about this meat slab. It was "squishy and squirmy," she said.

It dawned on her that she was handling the bull’s dick.

Haben dropped the appendage on the table in horror. At the time she was almost fully blind, but she wasn’t as deaf as she is today. She could hear the laughter of her extended family swelling around her. She was mortified and angry. Someone had left it on the table for an unwitting victim, and they likely hadn’t expected her to join them at the butchering table.

Was it bullying to laugh, or was it funnier because Haben was the victim? Where is the line when it comes to humor if it involves disability? Haben asks readers to grapple with these questions, but mostly, she invites them to laugh.

Haben didn’t think the bull dick story was funny at the time. But today, Haben says the story is hilarious, and a standout moment during her childhood when her sense of humor was just starting to blossom.

The story is just one found in her debut book Haben: The Deafblind Woman Who Conquered Harvard Law.

"Reading my book out loud brought all the stories to life for me," disability rights lawyer, activist, and author Haben says. (I'll refer to her as Haben, not Girma, because she prefers to be called by her first name). "The funny scenes still cause me to laugh out loud. Writing took forever. Revising took forever times 50. All the humorous moments sprinkled throughout the book made the tediousness of editing bearable."

While Haben is undeniably funny, positive, and driven, Haben is a serious book that deals with serious issues. Yes, she brings humor to many interactions, but her mission in life is not an easy one: She advocates for accessibility for people with disabilities. After graduating from Harvard Law School, she joined the legal team that extended the Americans with Disabilities Act to online companies. These days, she focuses more on advocacy than litigation. With her trusty Seeing Eye dog Mylo, Haben travels the world teaching companies and individuals about disability inclusion and possibilities for innovation. Her work and her book both center on her fundamental goal in life: Inclusion.

I’ve seen people grow flustered and opt to talk to me — a nondisabled person — instead, even though they want to convey messages to Haben or talk about her.

In her line of work, humor helps a lot. In fact, Haben is taking improv comedy lessons at Face-Off Unlimited, a Queens group that is teaching her how to hone her hilarity .

"Developing a strong sense of humor has helped me connect with people over the years," she says. "I plan to continue working on it."

Haben can’t see, and her hearing has diminished significantly through the years — she can only hear some high frequencies in quiet places — but she can speak vocally and clearly. To streamline communication, Haben invented a system in which she connects a keyboard wirelessly to her digital braille device. A person types, and the braille pulses their words into her fingers. Through screen-reader technology, Haben can read all texts, emails, and some digital web content — though most of it is still inaccessible, she says.

I have worked with Haben for about three years. I produced a video about her, and I now do interpretive work at her events. Her communication technology is extraordinary, but it has some limitations: Technical difficulties can jam up the words, the keyboard only allows for one voice at a time, and some people don’t want to type. I’ve seen people grow flustered and opt to talk to me — a nondisabled person — instead, even though they want to convey messages to Haben or talk about her.

When people do interact with her, they tend to be on their best behavior, says Haben, though her biting humor helps cut through the formality.

“I’m already Deafblind, I don’t need to be drunk,” she once said to a table of cohorts who offered her wine at a conference.

Once Face-Off Unlimited director Jay Painter was typing clunkily to Haben about a documentary he is producing about her. She said to him, “We should make a subplot to the documentary. The hero’s journey: Jay learns to type.” Burn.

During an improv exercise with Face-Off Unlimited, her partner lamented her own looks in the scene and called herself a troll. To everyone’s delight, Haben said, “I wouldn’t know.”

"A lot of nondisableds feel nervous, uncomfortable, worried about saying the wrong thing," she says. "When I tell a joke, though, the resulting laughter allows people to relax a bit... Later, after the joke, people are more likely to listen to my thoughts on accessibility.

Alleviating the discomfort of nondisableds is not a task that should not fall on Haben’s shoulders though, which is why she is advocating for a world where disabled people can live comfortably.

Writing a book was tough, she says, but it allowed her to communicate her whole story. Haben's mother, Saba, was a refugee from Eritrea who escaped wartime violence and took a perilous journey through the desert to Sudan. Saba was then granted asylum in the United States, where she met Haben's father. Haben and her older brother Mussie were both born Deafblind for unknown reasons, and she has two other siblings.

Haben grew up in the Oakland School District and attended Lewis & Clark College in Portland. She later graduated from Harvard Law School, becoming the first Deafblind person ever to do so. (Helen Keller graduated from Radcliffe, Harvard’s all-women sister school.)

"I’m hopeful that more people, disabled and nondisabled, will step out of their comfort zone to forge relationships across differences."

Despite her impressive resume, she says she was rejected from many jobs once hiring managers discovered she was Deafblind. It is, unfortunately, not a rare circumstance: People with a disability are unemployed at twice the rate of people without a disability, according to the U.S. Bureau of Labor Statistics.

This is why Haben fights so hard, though she shouldn't have to.

In college, she couldn't read the cafeteria menus until she cornered the food services department with litigation threats. She loves the comedy of Tiffany Haddish, Mindy Kaling, and Maysoon Zaid, but she can only access their books, not their vast body of video work because digital transcripts don't exist for many of them. She loves salsa dancing, but was once thrown out of a club because the bouncers didn’t know that service dogs are legally allowed in every public establishment.

Haben isn’t the type to give up, though. She saw the discrimination as an opportunity to craft her mission, and she wants more people join her in the fight. "I’m hopeful that more people, disabled and nondisabled, will step out of their comfort zone to forge relationships across differences," she says.

"Some people claim I do the impossible," she tells me later. "They say that about magicians, too. In reality, we've dedicated years of our lives to developing our skills. I transform challenges into opportunities, struggles into soul-healing laughter. That's my magic."