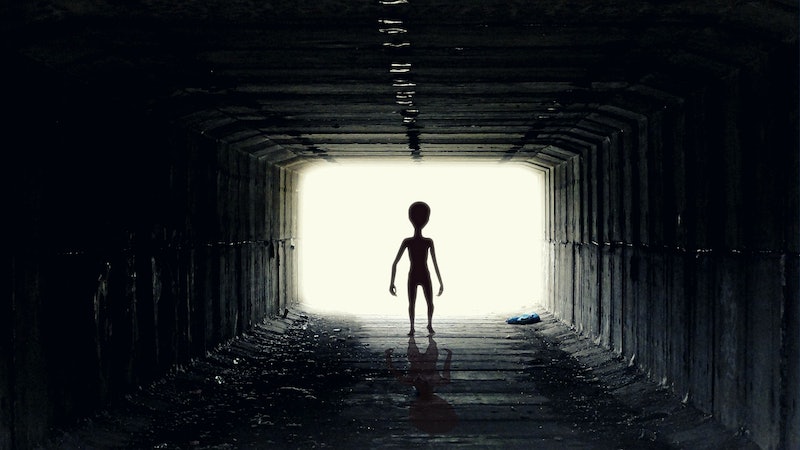 The universe is at least 46 billion light years in distance, and it's always expanding; in layman terms, that means it's really effing big. With so much out there we haven't yet seen, it's hard not to believe there are aliens roaming somewhere... but why haven't they contacted us yet? One scientist has a theory: aliens are living underwater on other planets with interior oceans frozen at the surface, making it really hard for them to text us or send a Facebook message or whatever.

The topic of why we haven't found aliens yet even though it's most likely they're out there is such a huge topic of conversation that it has its own name: the Fermi Paradox — a theory which says that considering how young our own planetary system is, and how easy interstellar travel could possibly be, we should've met aliens by now. So, what gives?

Alan Stern, a former NASA scientist who currently works at the Southwest Research Institute in Texas, has hypothesized is his new paper that aliens are living deep below frozen oceans of distant planets, suggesting that "the great majority of worlds with biology and civilisations are water ocean worlds." Sounds like the plot of a really cool movie, eh?

The reason for living under the ice isn't simply because aliens apparently prefer colder climates — it's for their own safety and survival: living under the oceans would protect them from natural disasters like exploding stars and space radiation spikes. Also, it's cold AF, so they really have no other choice.

While in the case of Stern's suggestion, these planets would be habitable, they're also probably covered almost entirely in water, which means the creatures inhabiting the planet don't look like you and me. No. They might look more like fish. Enjoy having nightmares about that tonight.

Does that mean fishy looking creatures are hanging out at the bottom of the ocean living a civilized life like humans do? Not so fast. While they might be a somewhat advanced species, we can't assume intelligent life there is similar to intelligent life here. Dr. Fergus Simpson of the Institute of Cosmos Sciences at the University of Barcelona explained why, earlier this year: fish-like aliens would lack necessary environmental conditions to continue becoming more evolved. "The main reason I'm skeptical about there being lots of intelligent underwater alien species is that I think it's harder for aquatic creatures like dolphins to use tools or build a fire," he said.

Nobody has mentioned anything about mermaids yet; so I'm not ruling that out as an option, just to be clear.

While it may sound like the lousiest of places to live, Stern explains in his paper that these "interior oceans" are actually conducive to the development of life. The depth of the oceans, and the fact that they're covered by a thermal insulation (what Stern calls a "planetary lid" on top of the oceans), make for a safe environment. In other words, the oceans aliens are living in, he says, are so deep and well-contained that the surrounding environment and atmosphere can't really affect them too much.

That also means they can't venture out on dry land to say hello to their earthly neighbors, either.

This isn't the first time people have explored why we haven't found the aliens yet. Some scientists have proposed the Gaian Bottleneck, which says that there has been other life in the universe, but it never had the chance to grow or evolve. Early life is so fragile, and a change in exterior conditions can make an environment unstable; so, it's possible that a planet was able to create life but not sustain it, and organisms died not long after being born.

Other scientists say that evolved alien life is definitely out there, but we can't pick up on their messages because they encrypt their data.

Still others say the aliens are there, but they're sleeping. This theory suggests the universe is currently too hot for more advanced civilizations to effectively use their resources, so they're "hibernating" until the universe cools down, in what has to be the most epic nap ever.

While we have yet to get a straight answer — whether aliens are living underwater, sleeping, still evolving, encrypting their messages, or walking amongst us wearing human costumes — we don't need science to tell us this: aliens are real. So are mermaids. And unicorns.