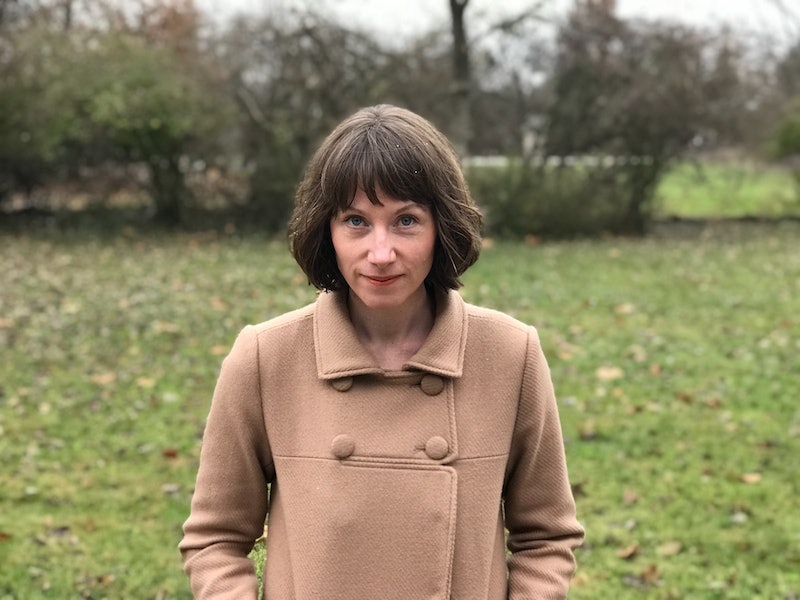 You're not a real New Yorker until you've cried on the subway, or so I've been told and told others and read about in magazines. I must be a real one, then, because I've cried on the subway at least a dozen times, and on the streets of the Upper West Side, and in Central Park, and once, in the back of a yellow taxi while cradling the box of tissue the driver had tossed into the backseat for me.

Heather Christle, the author of four poetry collections, knows the perils and pleasures of finding a good location to let loose and weep; she initially began her newest offering, The Crying Book, as a map of all the places where she has shed tears, though it quickly morphed into something more expansive, more incisive, more viscous.

"I suppose some people can weep softly and become more beautiful, but after a real cry, most people are hideous, as if they've grown a spare and diseased face beneath the one you know, leaving very little room for the eyes," reads the opening line of the book. "Or they look as if they've been beaten. We look. I look."

It's a shocking, gut-punch of an opening to a book that could, all too easily, drip with sentimentality. "I wanted it to be really physical, really visceral, and not pretty," Christle tells Bustle. "I think starting with a bit of an ugly cry was a way to let people know that we were going to be going deep in the body, but hopefully, with something of a sense of humor about it as well."

The result is a book that fully imparts the power of tears. It's a product of meticulous research (there are 198 endnotes), rigorous examination, and compassionate understanding. It tackles both the political power of tears (for example: the contrast between public perceptions of the tears of white women versus the tears of Black children) and the biology behind them (did you know emotional tears have higher protein contents, which is why they run down your face more slowly?) It is also a memoir about Christle's own experiences with grief, depression, and motherhood. Reading The Crying Book can be, like the act of crying, an emotional experience, a political experience, a scientific experience, or all at once.

So, how does one write a book about crying? I asked Heather Christle — here's what she said:

When did The Crying Book start to develop into what it is now?

The thing that made it clear to me that it was a book was that I started to do research. I've done research in the past, but the research just didn't stop. I developed this relationship where I would go and read and learn and then write about what I learned. Then I had more questions. I'd have to return to the research. That just kept happening over and over again. So, I didn't have a sort of separated process of first researching and then writing. It was very integrated and shaped the book in ways that I think are deep in its DNA.

How much reading did you sort of like end up doing in the process of writing this book? You wrote that your husband called your library of books "the crybrary."

A lot. Happily it went beyond just the book, because the books are exciting and thrilling to read, you know? There's Crying by Tom Lutz and Pictures and Tears by James Elkins.

There was so much more that I wanted to understand, and that meant I had to look beyond books that were directly about crying. So, I looked into animal behavior and into works of disability studies and into Bell Hooks and what she has to say about time. So, the "crybrary" got quite large. The book has 198 endnotes — and some of them are not books; some of them are films, and some of them are just notes. There was a lot of material. It was a joy because researching beyond books also meant that I could go and do research on Amazon reviews of crying dolls.

What are some of the more interesting or shocking or surprising things that you discovered in all of this research?

My favorite thing that I learned was that there are three different kinds of tears. There are basal tears, which lubricate your eyes and are always there, almost always there. There are irritant tears, which are the kind of tears that you shed if you get some dust in your eye, or if you're cutting onions. Then, there are psychogenic tears, which are the tears shed for emotional reasons. They have a higher protein content than the other kinds of tears, which is interesting in and of itself. The thing that's really fascinating is that that higher protein content makes the tears thicker, and it increases their viscosity, which means that they fall down your face more slowly. So that means there's a higher chance that somebody's going to notice because they're on your face for longer. There's a greater chance that whatever message it is that they're sending into the world will be received by somebody.

How does it feel to now be a crying expert?

It's very, very clear to me what injustices tears can reveal to the world.

I do think it has made me much better at encountering other people's tears. I know more about what is happening in the moments when people are crying. So, I hope that I'm more able to receive the tears as they need to be received.

When I read stories of tears in the news, there are some things that become very clear to me. How the tears of a white woman who’s a cop who killed a Black person in their home are perceived in the world and what they make happen, in contrast to the tears of the Black child who cries at school and is arrested and handcuffed for causing a disruption. It's very, very clear to me what injustices tears can reveal to the world.

This book does a really excellent job of not only focusing on the personal side of tears, but also the sociological and the cultural and the political side of tears. I love that you stretched into so many different directions in your exploration of crying. Did it ever feel like it was impossible to stop? Like if you just kept researching, you would keep finding new things to put it in the book?

Yes, it could have gone on forever. I think that I stopped because I wanted to have a different chapter in my actual life.

Before this, you had published poetry collections. How do you think being a poet influenced the writing of this book? There are so many poems mentioned in the book, and there are many mentions to the moon.

It made me very happy to thread the moon through these pages. When I was editing the book and figuring out how to make all of the strands into a coherent shape that had a feeling of movement to it, I assigned different colors to each of the strands that threads through the book and made it a chart, so I could look at it all at once and understand it. I made the moon have silver squares on the grid.

What are the other threads?

Much of the book is driven by your own story. How did you decide to work that in?

I think that it was driven in some ways just by the composition method, so that I wrote it chronologically. So, as life has an arc to it, so too might a book. I did go back and do some shaping work where I could see that a thread had disappeared for too long, and I needed to touch upon history again for a moment or crying behaviors for a moment. But on the whole, I think that just that chronological progression is the sort of steel undergirding to the many panels of glass that make up its various pieces.

I wanted to write a book about crying. That was the thing at the core. What was fruitful is that it did connect with so many other subjects that I found myself thinking about as I worked on the book and things that I experienced as I was working on the book. I went through some of the worst depressions of my life as I was writing this book. And I didn't know that that was going to be the case when I started writing a book about crying. But, as that happened, it seems clear that it would have to become part of the work I was doing as well.

It's an interesting life-mirroring-art situation.

It was important for me to finish writing this book, so I could go on and think some other things.

I feel so extraordinarily lucky that I get to be in this state of constant learning and creation.

The book is finished. Has your research ended or are you still finding yourself really fascinated by the idea of crying?

I am still fascinated, but I'm also researching a new project now. There’s no convenient term for this time — no "crybrary" — but I'm working on something about Kew Gardens, the Royal Botanical Gardens just outside London. My brain is going all over the place with it into questions of indigenity and naming and borders and national identities and the climate crisis — you can see, this is the way that things go for me. I focus on one thing, but it spiders out.

I love that. Obviously, it's work and I'm sure it is often frustrating, but it just sounds like so much fun.

I love my job. I can't believe that I get to do this. I feel so extraordinarily lucky that I get to be in this state of constant learning and creation. I can't imagine a luckier circumstance.

What do you hope that readers sort of take away from the experience of reading The Crying Book?

I hope that — this is me really getting big in my hopes — but I recently was reading Virginia Woolf's memoir and she has this memory where she talks about looking at a flower outside her family's house and having this sudden sensation that the flower was not just the stem of the flower, but the roots and the soil around it. She talks about this as being important because it's a moment of being when something real comes through the nondescript cotton wool feeling of daily life. When I was writing this book, I got to have that feeling for myself very often — something would just suddenly come clear and feel like it was illuminated in a way that gave me delight and joy and satisfaction. I don't think that those moments are contained in the book prepackaged for a reader to carry away, but I hope that readers will be able to come to the book and activate their own moments in reading, and that they might then have those moments occur in their own daily life as well. The shape of those moments will be very different for each person. We're all moving through our particular lives somewhere else, but if something like that could happen, I'd be very, very glad.

The Crying Book by Heather Christle is available now from Catapult.

More like this
Pamela Anderson Is Still A Hopeless Romantic
By Ilana Kaplan
10 Equally Romantic & Heartbreaking Books From British & Irish Authors
By Shahed Ezaydi
The Mysterious Gunther Corporation From 'Gunther’s Millions' Has Dissolved
By Brad Witter
Rachel Nickell’s Son Wants The Police To Take Accountability Over Errors
By El Hunt
Get Even More From Bustle — Sign Up For The Newsletter
From hair trends to relationship advice, our daily newsletter has everything you need to sound like a person who’s on TikTok, even if you aren’t.