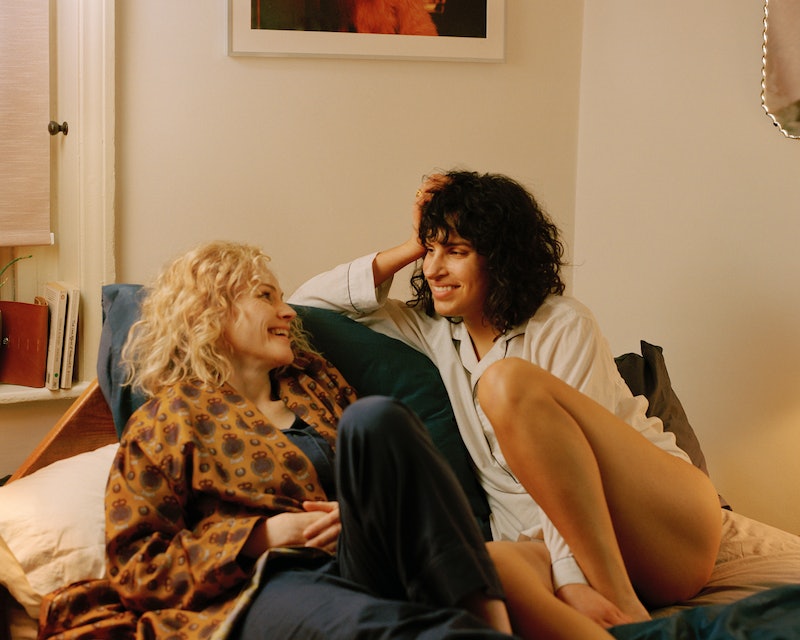 When I pressed play on Desiree Akhavan's new series on Hulu, The Bisexual, I wasn't entirely sure what to expect — other than the fact that it likely features a bisexual character, hence its title. After watching, though, I felt refreshed. Not because it's a clean story with a happy ending — it's actually messy in a lot of ways — but becauseThe Bisexual gets refreshingly real about relationships. Its treatment of its characters' stories, relationships, identities, and yes, sex, is genuinely nuanced in a way that mainstream TV tends to avoid, and that's what makes it so easy to watch.

The series follows Leila, played by director-creator Akhavan, as she navigates her repressed bisexuality after breaking off a relationship with Sadie, her girlfriend and business partner of 10 years. Spoiler alert: it's not an easy task. Not only because she's in love with Sadie, but because bisexuality is an identity she feels still isn't accepted by the queer community.

Yes, TV is well on the way to crafting more layered characters representative of specific identities like Leila's, but The Bisexual still feels new in its sharp focus on Leila's sexuality. It unapologetically delves into the beauty and complications around living a queer life, and how that transcends the professional space — aka how the hell you focus at work when your lesbian ex-lover of 10 years' desk is five feet away from yours. At one point in the first episode, Leila and Sadie announce to their handful of startup employees that their romantic relationship is on hiatus, and the interaction is appropriately cringeworthy and heartbreaking at the same time.

But the intersection of professionalism and queer romance is just one of many ways The Bisexual gets real. It also visits — without being preachy — the existence and importance of emotional intimacy and vulnerability in new and old relationships. Through simple, slow, meaningful dialogue and phenomenal acting, it explores more connections between characters in 90 minutes than many shows do in whole seasons.

For example, it's obvious that Leila cares deeply for her best friend, Deniz, and struggles to keep secrets from her. Their integral understanding of each other without much verbal indication is poignant. Leila is humbly attached to Deniz's feelings about her potentially disastrous decisions, and it reminds you of every good friendship you've ever had.

Leila also finds herself connecting with men on a deeper level than she thought possible — even if that man is her tone-deaf douche of a new roommate, Gabe, who she knows has good intentions. "I love you," she says on her way out of their shared kitchen in Episode 3, before catching herself and backtracking with, "I'm fond of you."

Possibly most important and striking, though, isThe Bisexual's portrayal of the physical act of sex — it's as real as it gets. It's awkward. It's fumbly. It's drunk. It's hard. It's on the bathroom floor. And there's queefing. When's the last time you witnessed a queef casually depicted in a TV show without associated shame or discomfort? Exactly.

In the creation of this show, Akhavan not only wanted to depict real sex and of course, queefing — she wanted to relay the fact, as a bisexual woman herself, that sex with men and sex with women don't differ all that much, and that bisexuality is a 100 percent valid identity.

“One thing that feels like a big secret is that sex with women is not that different from sex with men!” Akhavan told Vanity Fair. That's a line that Leila mimics in Episode 2 when she's having sex with a man for the first time.

The sex in The Bisexual is so raw, in fact, that it showcases two things commonly perceived as un-sexy in entertainment: condom use and consent. At one point, Leila scavenges for a condom, and before tearing it open to get busy, she places it under the light to check its expiration date. Somehow, something as simple as including that decision makes the whole season worth watching.

And that's only one of the slew of little things in the script that, together, give The Bisexual its big impact. Not to mention, its humor is as charming as it is raunchy and relatable. But what else would you expect from a woman-written, woman-directed project?

More like this
Kit Connor Speaks Out On “Shocking” Lack Of Bisexual Representation
By Sam Ramsden
'Waterloo Road' Is Back, With More Than A Few Familiar Faces
By Sam Ramsden and Vivian Iroanya
The One Detail From The Tampongate Scandal That The Crown Missed
By Karen Fratti
Booker Prize Winner 'Shuggie Bain' Is Being Adapted For TV
By Sophie McEvoy
Get Even More From Bustle — Sign Up For The Newsletter