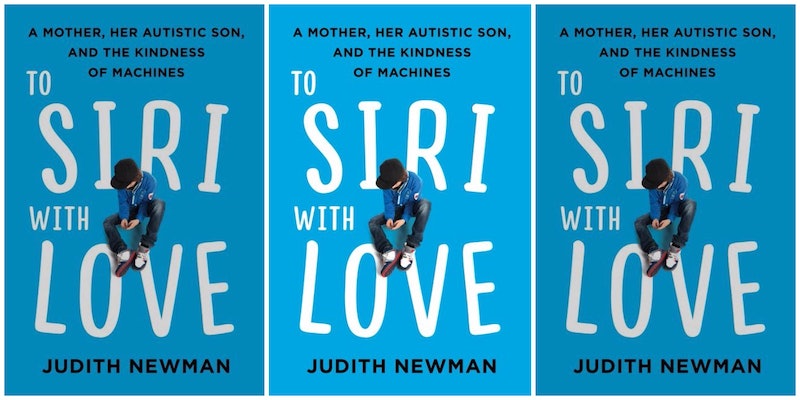 When I say the world hates me, what I mean by "world" is a lot of neurotypicals, or people who are not on the autism spectrum, hate me. When you're autistic and people around you don't know it, you often don't get the help you need to learn how to navigate the neurotypical world. I've had a rough life, right from my first bullying incident as a kid, to this past weekend when I read a book that I feel does incredible damage to the autistic community: To Siri With Love by Judith Newman.

To Siri With Love is a memoir written by Judith Newman, the neurotypical mother of a 13-year-old autistic son, Gus. In the book, she shares the story of how Apple's digital personal assistant, Siri, has helped her son navigate a neurotypical world.

The book — which has been endorsed by Jon Stewart, who called it an "honest and illuminating love letter to Gus," described by Kirkus Reviews as "a heartfelt 'slice of life' tale," and even praised as "unique, moving, and entertaining" by Bustle writer Stephanie Topacio Long — became the center of an internet firestorm earlier this week, when the #BoycottToSiri hashtag began circulating on Twitter. The hashtag was started by Amythest Shaber, an autistic YouTuber and spurred by #ActuallyAutistic users who believe the book recklessly releases details of Gus's life to complete strangers (Newman discusses his personal details and medical history) and maligns the autistic community in general. In certain scenes, she describes her son as "Batsh*t Crazy Kid" and "mutant." Throughout the book, she also references the work of known eugenicists Alfred Hoche and Karl Binding, and writes that she does not believe her son should have children of his own.

As an autistic parent, I have to agree with the critiques of this book circulating on Twitter. I read the book after receiving a copy for review from the publisher, and it made me vomit twice. I cried myself to sleep after finishing it. To know, without any hedging, what people like that think of people like me — it almost broke me.

To be clear, my criticism of this book is my opinion, but I do believe the author's words could do serious harm to the autistic community. I take serious issue with the way the author frequently "jokes" about her autistic son. In one scene, while describing a family trip to a Disney resort, Newman writes that Gus looks "completely insane" in most of the photos and that he "left the evening babbling incoherently about villains." In other passages, she indicates that she does not have a basic understanding of autistic traits, as evidenced in a scene in which she describes Gus's response to his twin, Henry, shouting:

"Henry would start to shout, and then Gus would escalate with his own hysterical screaming for no reason whatsoever since no one was even talking to him. Then he would run into his room and slam the door, and I’d have to follow him to make sure he hadn’t passed out—because he would probably also be holding his breath."

It is commonly known that many autistics do not respond well to loud noises. I cannot say for certain whether or not this is true for Gus, but in another passage, Newman writes that Gus "hides in a closet" during thunderstorms, which I believe serves as additional proof that he appears to suffer from some level of sound sensitivity. If so, I would disagree with her assertion that he is "screaming for no reason."

In another section, Newman describes a moment when she and Gus went shopping. If I have the author's timeline correct, Gus is about eight years old in this scene, in which she maligns his worldview. She writes:

I see people riding an escalator. Maybe it requires magic mushrooms to see it the way he does."

There's also the name-calling. From another passage:

"Lately I've been getting fewer and fewer telemarketer calls. I suspect there's a 'Do Not Call: Batsh*t-Crazy Kid at Home' list."

In another, she writes:

And at yet another point, she writes:

"It's the melding of machine and feeling that seems so core to the autistic self."

I hope I don't need to explain why referring to your son as "batsh*t-crazy" or "mutant" or as a "machine" is dehumanizing.

However, this isn't even what I consider to be the worst of the book. In several passages, she writes that worries that Gus will become a parent and advocates for a strange course of action to ensure it doesn't happen:

"I am still deeply worried about the idea that [Gus] could get someone pregnant and yet never be a real father — which is why I will insist on having medical power of attorney, so that I will be able to make a decision about a vasectomy for him after he turns 18."

"Gus should not be a parent. Not just because he's still shaky on the whole concept of where babies come from, but because the solipsism that is so much at the heart of autism makes him unable to understand that someone's needs and desires could ever be separate from his own, let alone more important."

I do not speak for every autistic and I do not know the details of Gus's life, beyond what is shared in the book, but I am a well-educated, employed autistic parent of autistic kids, and it feels to me as though Judith Newman does not believe I am capable of handling my children. As a teenager, I wasn't much different from Gus. Yet, I'm here, and though I might not be considered successful by neurotypical societal expectations, I manage.

Throughout the book, she also shares personal information about Gus's fears and differences from the neurotypical norm in a way that I find incredibly disrespectful. These are pieces of information that Gus — and Gus only — should share with people he cares for, and only when he is comfortable enough to do so. So often, autistics are mocked for what makes us different. I believe that taking that power away from Gus is unconscionable.

Ultimately, I believe this book to be so massively problematic that I am enraged thinking about the channels of people — agents, editors, publicists, marketers — that it went through to make it into bookstores. I cannot judge whether or not Newman loves her son or is a good mother; that is not for me to decide. But I do think that the words she has written and allowed to be published are harmful to the autistic community.

This piece is an opinion, and does not necessarily reflect the views of Bustle.