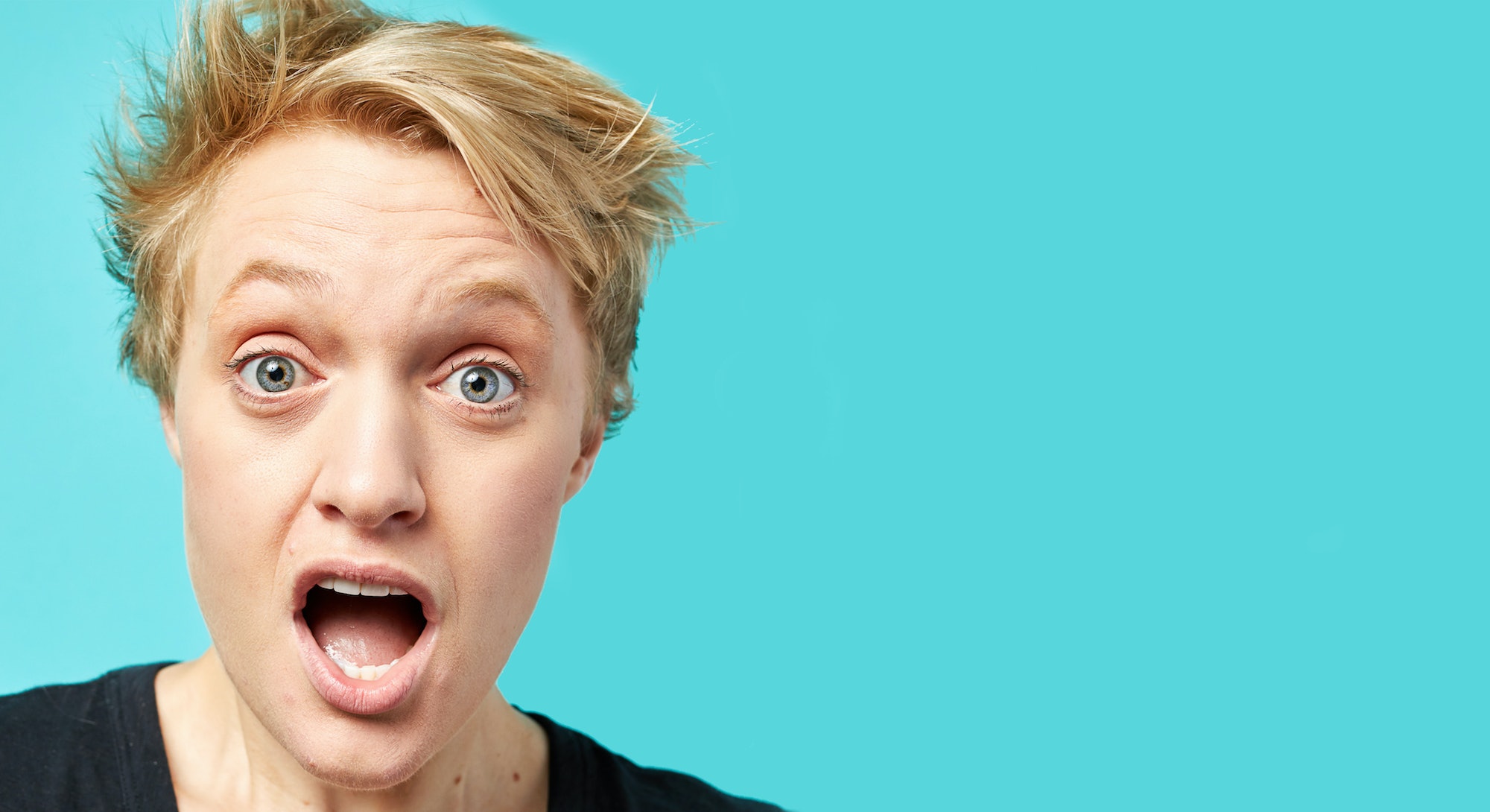 Emma Willmann hasn't been in the comedy business long, but she's already on her way to being a big name. The standup comedian is probably best known for her breakout performance on The Late Show With Stephen Colbert, but Willmann can also be found performing all over the country, hosting The Check Spot on SiriusXM, and co-hosting Wake Up with Taylor! on SiriusXM STARZ. Determined to have her own late night show some day, Willmann is constantly thinking about how she can more effectively tell her jokes. As a gay woman reaching for mainstream appeal, Willmann is very conscious of not wanting to be pigeonholed, too simply, as a gay comedian.

Now, Willmann shares her thoughts on how her sexuality affects her career, and highlights an inherent homophobia that the comedy industry still hasn't outgrown. As told to Associate TV Editor Martha Sorren as part of Bustle's Comedy IRL package, celebrating strong women in comedy.

The very first time I did standup, I thought I had it figured out. I thought if I was just myself and spoke about my experiences, the success would follow. I was wrong.

I started my career performing at a queer poetry open mic night in Jamaica Plain, Massachusetts — you’re not gonna get a more gay situation than that. I could have gone up and, like, chopped up a pumpkin and people would have been like, "Aww." I'm there and the gluten-free Birkenstock had cancelled, so there was an open spot. I decided to try telling a story. It was the most supportive situation. I said maybe one kind-of funny thing and people were losing it laughing. I went back a month later, and it went great again. Now I'm thinking I know how to do comedy because I’ve done two open mics in the most supportive setting for a gay woman. When I left that setting, I found out how little I knew.

I decided to enter a comedy competition in a really blue collar area of Boston. At this point I’d never done an open mic at a comedy club. I’d never watched a comedy show in my life or even been into any kind of comedy venue. I got on stage and it was scary. I hadn't even started yet and one guy yelled at me from the audience, "You’re funny looking! You look like a boy!" Just like that, I had my first heckling experience.

A couple of years later I ended up winning that competition. I think I was the first woman that did it, probably the first gay person too. But I didn’t even bring that up. You first need leverage in this industry before shouting, "Yeah, and I'm queer!" You've got to get into the party first. But then once you do, it's hard because everyone wants to keep you in that box.

I want to just be able to talk about going to a movie with my girlfriend and not be be stereotyped as a "gay comedian."

In a way, being a comedian is like being a politician. So much of the message isn’t just what you’re saying, it’s how you’re saying it. And it is frustrating to have to think so much about every word choice and how many minutes of "gay content" I have in a show and when to "come out" to an audience.

And, here's the thing. I know that many comedians have it just as tough if not more so than I do. I think everyone's experience should be respected. This is just something I've happened to struggle with in my career. The other night I did like five minutes of "gay jokes," but it didn’t feel quite right, and the audience wasn't with me. About four minutes in, I knew I'd stuck with the theme for too long. But I wish that wasn't a problem; my jokes don't need to all be put under the gay umbrella. They're not "gay jokes."

I often talk about my experiences dating or dealing with breakups — those things aren't gay. They’re universal topics. Everyone should be able to relate to feeling nervous or being heartbroken or rejected or in love. But, since I’m gay, I might reference me and my girlfriend going to a movie — a joke that would be about the movie, but for some audiences it's automatically a gay story. I want to just be able to talk about going to a movie with my girlfriend and not be be stereotyped as a "gay comedian," but that's not how the world works.

Sometimes I'll notice that the audience will relax when I make people like me the butt of the joke. I really resent them for that.

I have a little trick, that often helps straight guys see themselves in the joke. I’ll say something like, "Oh, I was with a straight guy and he did this." To keep those people who might be quick to stereotype me on board, I have to dig a little bit deeper to build a bridge.

I do it behind the scenes, too. Sometimes, there can be a male venue booker here or there who seem like they're a little put off by me or unsure how to act, since I can appear more masculine. I can understand that — but for better or worse, I try to soften my approach. I have to make them feel more comfortable by changing the way I act. But, even when I'm just being myself and telling my usual jokes, sometimes I'll notice that the audience will relax when I make people like me the butt of the joke. I really resent them for that. Queer inclusiveness has gotten better over the years, but still, many people seem like they're not ready for people like us.

So I stay out of my potential "niche." If I play into being the "gay comedian" and not Emma The Comedian, I keep the bar low because then I'm only being compared to gay comedians, instead of all comedians.

That makes things tough, but I prefer it that way. I don't want to only headline "gay showcases." I also want to land massive festivals and maybe, one day, my own sitcom or late night show. I want to do the things that any comedian would hope for. I want to be known for my work above all, and I want to do all that without a label hanging over my head.