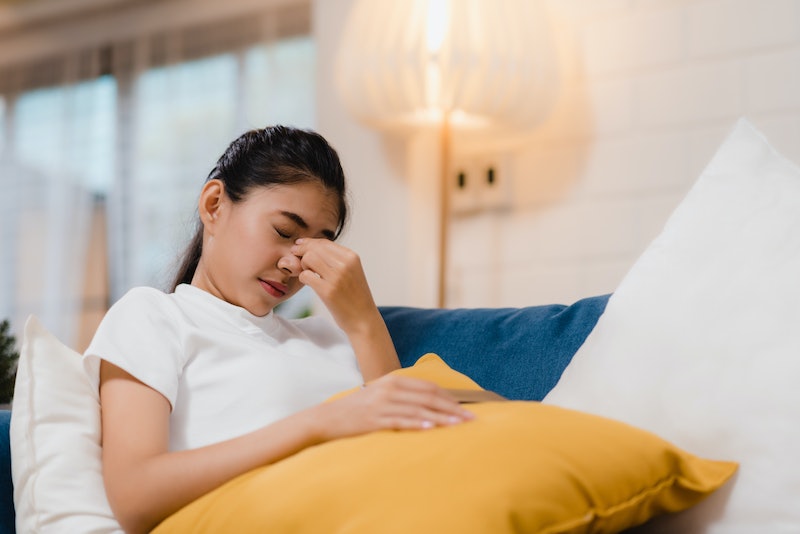 Tirachard Kumtanom/Shutterstock
By Lauren Sharkey
May 24, 2019

A migraine is more than just a bad headache. It can leave you curled up in bed for an entire day unable to face any kind of light source. It can leave you vomiting and feeling weak. It can result in serious mental health issues. Chronic migraine sufferers may even be forced to quit their job. Trust me, I know. So when a "revolutionary" new treatment is deemed to be too costly for certain areas, it's a huge disappointment. That's what has happened with migraine drug Aimovig, which isn't available everywhere in the UK. Only Scotland.

As the Daily Mail reports, Aimovig (also known as Erenumab) is the first new migraine treatment in two decades. Sufferers are currently left to try usually useless painkillers or stronger preventative prescription drugs designed for things like cardiovascular issues or epilepsy. Some may go down an alternative route, opting for treatments such as Botox. (Right now, I'm trying acupuncture.)

But Aimovig has been described as a life changer by patients, according to the BBC. It works in a different way to all the rest. As the Aimovig site explains, in our bodies, we have calcitonin gene-related peptides (CGRPs) and CGRP receptors. CGRPs attaching to, and activating, the receptors is thought to play a crucial role in the onset of a migraine. Aimovig therefore blocks the CGRP receptor, preventing a migraine from occurring.

Studies have shown promising results. According to Aimovig manufacturers, around 40 percent of people with chronic migraine experienced at least a 50 percent decrease in their number of monthly migraine days. This increased to 50 percent of people for episodic migraines. Chronic migraine is defined by Aimovig as having 15 or more headache days every month. Of these 15, at least eight must be characterised as migraines. Episodic migraine, on the other hand, means between four and 14 migraine days per month, according to Aimovig.

The drug — which comes in the form of a monthly injection — is already being "widely used" in the U.S., reports the BBC, and was approved for use in Europe last July, reports PharmaTimes. Yet it has only been made available on the NHS in one UK country. In April 2019, the Scottish Medicines Consortium (SMC) announced that chronic migraine sufferers who had tried a minimum of three preventive treatments would be able to access Aimovig.

So far, the governing body that controls the NHS in England and Wales has rejected calls to do the same, although the BBC reports that it is being prescribed by a chronic pain centre in London.

Back in January, NICE openly said no to making Aimovig an NHS-funded drug, mentioning costs. (According to pharmaphorum, the treatment is thought to cost around £5,000 a year.)

"Erenumab is a promising new preventive treatment for migraine that has been shown to be clinically effective compared with best supportive care," Meindert Boysen, director of NICE's Centre for Health Technology Evaluation, said in a statement. "However, there was not enough evidence to suggest that it is more effective than botulinum toxin type A for people with chronic migraine, which NICE already recommends. And for both the chronic and episodic migraine populations, there was no evidence to show that Erenumab is effective in the long-term in people for whom three previous preventive treatments had failed."

The drug's manufacturer, Novartis, expressed disappointment at the decision, but said it would continue discussions with NICE so that all eligible patients in the UK can freely access it in the near future. This also appears to apply to Northern Ireland. Although the country's NHS service has a different name (Health and Social Care or HSC), it takes NICE guidance into account.

Arguably, this is yet another example of the health inequality that disproportionately affects women in the UK. As The Migraine Trust states, migraine affects three times as many women as men. The condition also comes with a huge financial burden to the nation's economy, costing over £3 billion a year in NHS fees and absenteeism from work among other things. Surely, a once-a-month injection, if effective, would reduce that astronomical figure? Not to mention give sufferers their lives back.