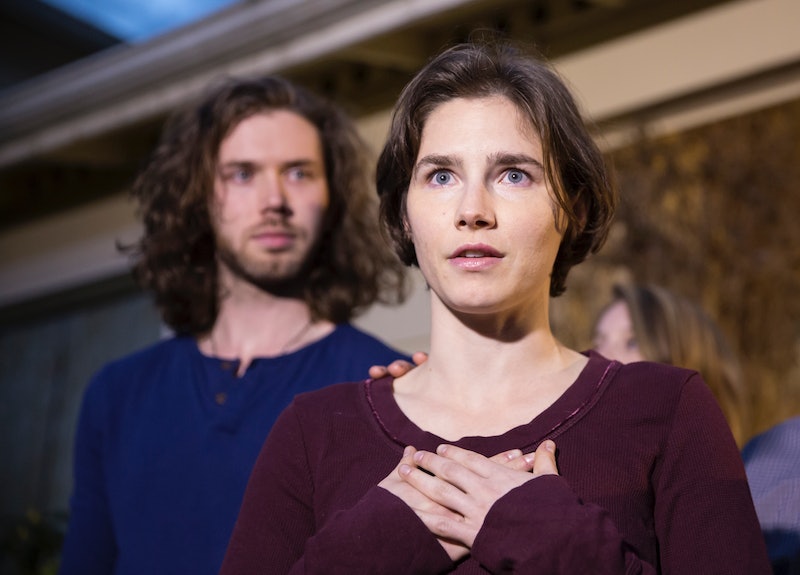 On Thursday, a central figure in one of the world's more well-known murder cases came back to the country where it all began. So, you may be wondering why Amanda Knox is back in Italy now. According to CNN, the American former exchange student landed at Milan's Linate airport and is in town as a guest speaker for a media event arranged by the non-profit legal group called the Italy Innocence Project.

Come Saturday, Knox is expected to speak on a panel called "Trial By Media" at the Criminal Justice Festival in Modena, northern Italy, according to The New York Times.

As a guest speaker, Knox will discuss how the media reported on her when she was convicted of murdering fellow British student and flatmate Meredith Kercher in 2007. After her conviction, Knox spent four years in prison and was ultimately acquitted and released in 2011. That was the last time she was in Italy.

On Wednesday, Knox also wrote a detailed essay on Medium in which she explained the mission of her return to Italy. "I’m doing so," she wrote, " because I’ve been invited by the Italy Innocence Project to speak about wrongful convictions and trial by media." Knox wrote that the most private details of her life were thrust out in the open by the press, including "my sexual history to my thoughts of death and suicide in prison."

One of the festival's organizers, Guido Sola, told CNN on Thursday that Knox's presence at the event was crucial because she "is the icon of trials that the media carry out before the trial in court is conducted." Sola added that in spite of Knox being "definitively" acquitted in court, many people still viewed her as guilty simply because, he said, "she has been the victim of a barbaric media trial."

On Instagram, too, Knox had been alluding to feeling nervous about her trip to Italy. In a photo uploaded three days before she landed in Italy, Knox captioned it with, "Three days till I return to Italy for the first time since leaving prison. Feeling frayed, so I made my own inspirational workplace poster. 'Hang in there!' Just imagine I'm a kitten."

In yet another photo on Instagram, where she's pictured alongside her her fiance and novelist Christopher Robinson, Knox asked her followers to "wish us, 'Buon viaggio!'"

In her essay, Knox also wrote that the "ravenous media" profited from her experience "by sensationalising an already sensational and utterly unjustified story." The prosecutor, she added, "painted me as a sex-crazed femme fatale."

The American also explained why she kept her social media accounts open to the public. "The tabloids would lift my photos out of context and call me strange," Knox wrote in her Medium essay. "I did so because I just wanted to have what every other person around me had, the freedom to shout into the wind and say: 'Here I am!'"

By being a guest speaker at the Criminal Justice Festival, Knox may get a chance to tell her story on her own terms. She wrote in her essay that she didn't expect the media to undergo a complete paradigm shift in how it covers such cases. "But if some outlets change," Knox wrote, "even a little, that’s progress."

More like this
6 Organizations Fighting Police Brutality That You Can Support Right Now
By Syeda Khaula Saad and JR Thorpe
This Is When Netflix Is Going To Start Charging You For Sharing Passwords
By Darshita Goyal
Watch Jacinda Arden’s Devastatingly Honest Resignation Speech
By Sam Ramsden
Twitter Has *A Lot* To Say About The "Single Penalty”
By Sam Ramsden
Get Even More From Bustle — Sign Up For The Newsletter
From hair trends to relationship advice, our daily newsletter has everything you need to sound like a person who’s on TikTok, even if you aren’t.