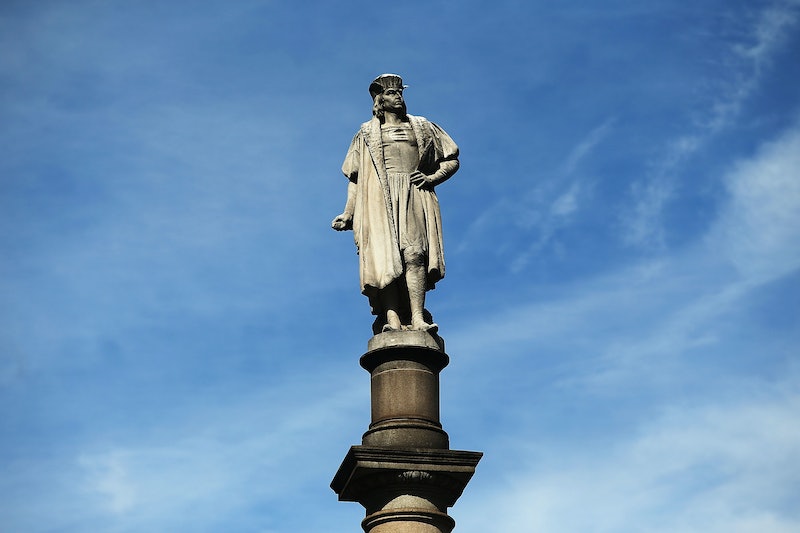 Columbus Day, which is Monday, Oct. 9, became a national holiday in 1937 to honor explorer Christopher Columbus’ achievements, and to celebrate Italian-American heritage. However, as an Italian-American, I'm pretty ashamed of this holiday. If you've ever wondered why Columbus Day is a federal holiday, the celebration of Columbus arriving in what is now the United States in 1492 has a long and complex history. When I was in college I took a class called "American History Before 1492," which is when I began to seriously rethink what it means to celebrate Columbus Day.

If you don't know the history of Christopher Columbus, here's the short version. Columbus was an Italian-born explorer who set sail in August 1492, bound for Asia with backing from the Spanish monarchs King Ferdinand and Queen Isabella, according to History.com. Instead of landing in Asia, Columbus came ashore in the Bahamas, and later spotted Cuba, though he thought it might be Japan. "It wasn’t until his third journey [to the Americas] that Columbus finally realized he hadn’t reached Asia but instead had stumbled upon a continent previously unknown to Europeans," History.com reports.

While Columbus was credited with discovering this "new world," it wasn't really new at all. It was already populated, and History.com explains that, "Activists have long argued that holidays, statues, and other memorials to Columbus sanitize his actions — which include the enslavement of Native Americans — while giving him credit for 'discovering' a place where people already lived." And, as more people become aware of what celebrating a day like this really means, more and more cities have opted to replace Columbus Day with Indigenous Peoples’ Day.

Celebrating Columbus Day has been controversial since the '70s, but since 1991, History.com reports that dozens of cities, several universities, and a few states have adopted Indigenous Peoples’ Day, a holiday that celebrates the history and contributions of Native Americans. This day often falls on the same day as Columbus Day, and not everyone is happy about it. Proclamations from former President Barack Obama and President Donald Trump about Columbus Day are very different.

Obama's proclamation acknowledges the pain and suffering Native Americans still endure as a result of Columbus' voyage. Trump's version for 2017 praises Columbus and Italian-Americans, but erases Native Americans from the conversation entirely. While there are many things that make me proud of my Italian heritage, Christopher Columbus is not one of them. The treatment of Native Americans at the hands of settlers is a shameful part of American history.

Despite the troubled history surrounding Columbus Day, a new survey, conducted by The Marist Poll, found that 76 percent of American's still support Columbus Day citing that they believe that Columbus, and other historical figures, should be judged by the standards of conduct of their own lifetimes, as opposed to modern standards, according to a press release.

"The fundamental arguments for and against Columbus Day are well-established," Jim McDermott reported for American Magazine. "Columbus’ trip across the Atlantic was a journey akin in its time to astronauts traveling to the moon; that he undertook it, let alone survived it, is astonishing. (Leif Ericson landed in Newfoundland almost 500 years earlier, an even more remarkable feat.) But his arrival in the Caribbean in 1492 also led to the forced colonization and eventual extermination of tens of millions of native inhabitants of the Western Hemisphere."

McDermott also wrote that part of the initial reason behind Columbus Day was to elevate an Italian-born person during a time when discrimination against Italian Americans was commonplace because of their darker skin complexion and Catholic religion. By identifying Columbus as the founder of the new world, and aligning themselves with him, many Italian Americans were able to argue that they played a key role in the founding of the United States, and having a holiday to honor that put them in a better position in their new society.

However, while this may have been true initially, in 2017 this argument is no longer valid. Los Angeles Councilman Mike Bonin — the great-grandson of Italian immigrants — offered this statement while the L.A. city council was debating whether or not to change Columbus Day to Indigenous Peoples’ Day (they ultimately voted in favor of the change), McDermott reported: "I’ve thought about my ancestors and their history. And to me, celebrating Columbus Day does not honor their story and their struggle and their history; it insults it, and it besmirches it."

Most students aren't taught the full history behind Columbus Day in school, and even though my great-great-grandmother was Native American, I didn't learn it until college. Celebrating Indigenous Peoples’ Day instead of Columbus Day is a way for people to stop and reflect on what this day is really about.

According to History.com, the director of the American Indian Studies Center at UCLA, and a Chickasaw tribal citizen — wrote that “virtually none of my university students has had any education whatsoever in the history of this country’s treatment of the 10 million or so people who lived here before Europeans arrived.”

By understanding the real history of this country, it might be naive of me to think that it could evoke compassion and understanding from those who don't support rights for refugees and immigrants who came to the U.S. the same way almost every other person who chose to come here did (not everyone got a choice). We are all immigrants, and we can't erase the fact that when Europeans arrived here they displaced a culture that already occupied this land.

Celebrating Columbus Day is not the same as celebrating Indigenous Peoples’ Day. Just like we are removing statues of confederate heroes, it's time to move beyond Christopher Columbus. Because, I want to believe the U.S. is better than this.

More like this
15 Gifts That Bring Your Faraway Loved Ones Closer During The Holidays
By Kaitlin Marks
35 Holiday Trivia Facts That Will Impress Your Guests This Year
By Lauren Grant and Emma Carey
69 Great Gifts For Guys No Matter What Their Hobbies Are
By Teresa Newsome, Mia Mercado and Brittany Leitner
7 Joyful Alternatives To A Traditional Holiday Celebration
By Jessica Goodman
Get Even More From Bustle — Sign Up For The Newsletter