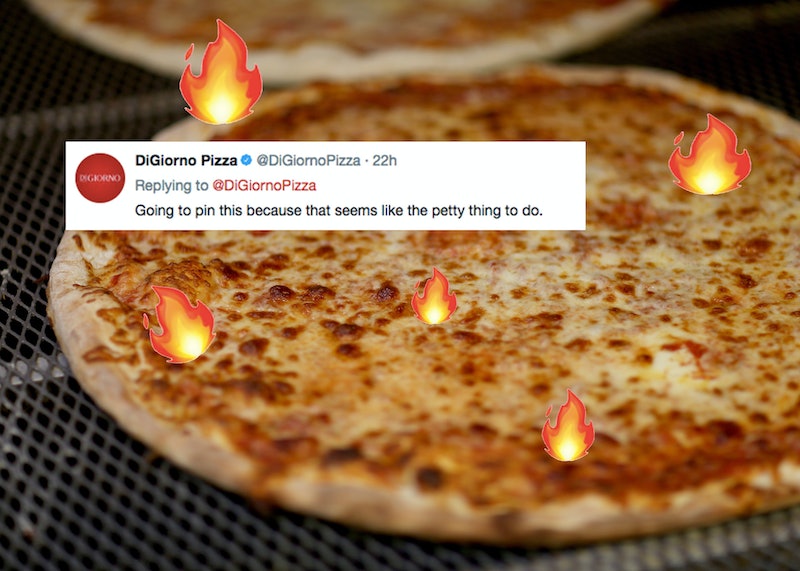 We can all agree pizza is a food eminently worthy of praise. Scientists have even conducted studies to figure out why we love pizza so much, and talking about it has me craving a pie. Even though we're universally united when it comes to the goodness of pizza, many found themselves doubting a ubiquitous chain after a recent controversy. Earlier this week, Papa John's CEO John Schnatter blamed NFL national anthem protests for the company's lagging sales figures. Papa John's is a big NFL advertiser, and Schnatter told investors the league hurt the company by not stopping the protests. People reacted by telling the company to blame its pizza quality instead of football players for poor sales, and DiGiorno Pizza saw an opportunity to clap back at Papa John's NFL statements. The brand, best known for frozen pies, tweeted an emoji-filled jab at Papa John's sales numbers on Nov. 1. Just in case people somehow missed the shade, they followed up with, "Better Pizza. Better Sales," mocking Papa John's "Better Ingredients, Better Pizza" slogan. Twitter users were immediately here for the drama, and I can't blame them. Sure, pizza usually unites us, but nothing brings us all together like brands roasting each other in a legitimately hilarious way.

Things continued to get wonderfully messy from there. On Nov. 2, Papa John's updated its Twitter bio to say, "Frozen pizza = the pizza equivalent of a participation trophy," a likely nod to millennials being called the participation trophy generation. The phrase can also be pretty problematic, as some conservatives use it to decry progressive policies: Political commentator Allen West argued in a 2015 op-ed that participation trophies were the downfall of America. "We are slowly moving away from what the American dream truly represents – creating victors, champions," he wrote. "We have those who through the giving away of the little plastic trophy are making victims." Perhaps unsurprisingly, Papa John's retort didn't land well with Twitter, and by Nov. 3, the brand's bio was back to normal.

DiGiorno didn't stop. By my count, there have been at least 14 tweets shading Papa John's since Nov. 1, and it doesn't seem like DiGiorno has any plans to slow down. They've referenced previous tweets where they delivered burns to Papa John's, like when they threw shade after Iggy Azalea publicly called Papa John's out after a delivery driver allegedly shared her phone number with friends. A recent tweet references the company's mentions being in shambles.

DiGiorno is taking a bit of a risky approach. Digiday pointed out that when brands go negative in their social media messaging, it often takes longer for them to send out tweets — it's not far-fetched to think the tweets have to be approved by multiple people before being blasted out to the world. But DiGiorno's social media reps are truly living their best lives. Five minutes after someone called Papa John's "dog sh*t" pizza, the brand replied in seeming agreement.

From the looks of it, the sauciness has earned the brand some new fans. YouTuber Casey Neistat wrote, "never had DiGiorno but based entirely on the timing, message and sheer wit of this tweet it's my new favorite pizza," while others like Twitter user @RachPritchard praised the brand for their pettiness.

Even though some people are suggesting a DiGiorno's boycott, the idea doesn't seem to be gaining much traction. Based on Twitter's reaction, Papa John's took an L during this Twitter feud, although they do still have time to come up with a comeback. I'm hoping the tweets never stop — drama and pizza are two of my favorite things, so this is a great way to end the week.