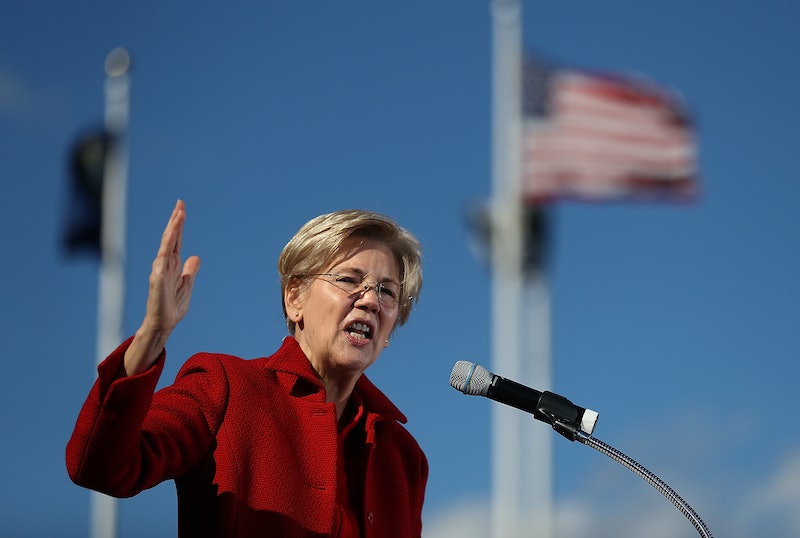 In the less-than-24-hours since Senate Majority Leader Mitch McConnell formally silenced Elizabeth Warren on the floor of the Senate Tuesday night, the move has clearly backfired. The subsequent uproar online and around the country has been fierce, but it’s not the first time that Warren has made things tricky for Trump. During the campaign, she was such a nuisance that she earned herself one of Trump’s famous nicknames, “Pocahontas.” But where did Warren’s Pocahontas nickname come from?

In short, Trump was trying to resurface a controversy from Warren’s race for Massachusetts senators, centering around her claims of Native American heritage.

When Warren first ran for the Senate in 2012, her opponent, incumbent Republican Sen. Scott Brown, challenged her assertion that she had Native American ancestry and accused her of wrongly using that false heritage to get jobs. According to an examination by the Washington Post at the time, there was no evidence that Warren, in fact, had the Native American heritage she claimed, though it was also unclear how it may or may not have helped her get law school positions

The issue became a main focal point of the campaign, and as Brown’s chances diminished, the attacks on Warren by his supporters over the question of whether or not she was Native American grew stronger. In the end, though, the attack proved unsuccessful, and Warren won the race against Brown by six points.

Fast forward four years to the heat of the 2016 presidential campaign, and Trump, who had enjoyed handing out nicknames to his political rivals, had already bestowed Elizabeth Warren with the handle “goofy.” But as she became more and more an outspoken critic of the GOP candidate, Trump started referring to her as “Pocahontas.”

Whether inured to Trump’s casually racially insensitive rhetoric, or perhaps the shock value of his nicknames having mostly worn off, the implications of his calling Warren “Pocahontas” never seemed to get much attention or cause all that much outrage, according to his critics.

However, Mary Kathryn Nagle, a member of the Cherokee Nation of Oklahoma, summarized the racist implications of Trump’s name-calling in an interview with MSNBC last summer, saying “Trump’s inability to discern the difference between Sen. Warren and Pocahontas is no accident. Instead, his attack on her native identity reflects a dominant American culture that has made every effort to diminish native women to nothing other than a fantastical, oversexualized, Disney character.”

If Trump has been good at anything, it’s his ability to keep us guessing at what his next target will be, and with the nomination of his Attorney General on the line, it seems likely that Warren could be in for more name-calling. However, she seems more than equipped to fight it.