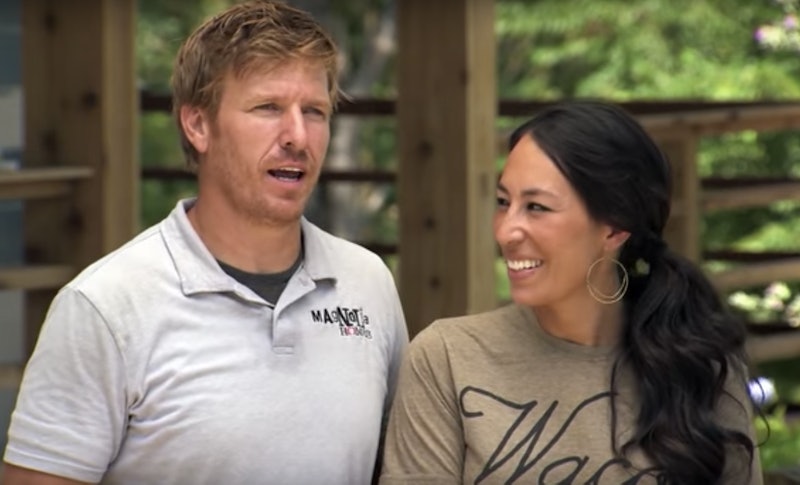 It's been a wonderful few years with Chip and Joanna Gaines, but sadly, HGTV's Fixer Upper is ending after Season 5. The show may be coming to a close, but the dynamic duo, hailing from Waco, Texas, isn't going anywhere. Still, their series has become one the highest-rated and most loved on the network — and for a reason. And while they explained why Fixer Upper is ending with a heartfelt post on their site Magnolia, fans are already feeling the void.

Their wild success in multiple home renovation businesses and ventures is important to the Gaines, but not as important as family. The down-to-earth couple has always been transparent about putting family first (they have four kids, ages 7 to 12). And as explained on their blog, they're taking this opportunity for a breather to rest and "hunker down with the kiddos."

While fans have loved having the Gaines in their living rooms for the last four years, the couple's reasoning for ending the show is super admirable (and will make their audience love them even more). "We’ve got everything that our hearts desire,” Chip once told People. “I don’t see how we could be happier.” After their Waco business grew to an international, celebrity level, they remain true to their roots, which should make fans feel even better about supporting them through the years.

The two are truly a dream team, as they'd find properties and restore them (Joanna as the designer and Chip as lead contractor) to make clients' homes their favorite places to be. And although they're closing the chapter on their television adventure (for now), their passion and natural knack for home renovations will still be a huge part of their lives.

As explained by Chip, they'll be focused on their other baby: their business Magnolia Market at the Silos, a Waco retail home goods store. Joanna adds that this break will allow for them to get new ideas and inspiration as they continue their journey.

Rather than milking a successful show, they're taking time to get fresh perspective and give fans and clients the best services possible. "Our plan is to take this time to shore up and strengthen the spots that are weak, rest the places that are tired and give lots of love and attention to both our family and our businesses," they explain in the blog post. In the era of dragged out reality TV shows, their approach is so refreshing.

Still, there's no doubt fans are already missing the show, even with Season 5 premiering in November. A handful of tweets sum up the general consensus:

But fans should know that Season 5 may be the best yet. "We have poured our blood, sweat and tears into this show," they said on the blog, explaining how proud they are of the final season. "We laid it all on the field and didn’t hold anything back. We think it’s the perfect finale to this amazing journey we’ve been on."

And while Season 5 is looking like it'll go out with a bang, fans should remain hopeful that Joanna or Chip (or both) will return to TV. "We can't wait to see what's next. We believe in our hearts that we're gonna see you again right around the corner," said Chip. "So stay tuned."

Perhaps Jo's spin-off Behind the Design, introduced earlier in the year, will be revisited. Or maybe she'll still give some love to her web series Design On Her Mind. Or maybe, just maybe, they'll create something totally new to blow fans away — that is their speciality after all.

Fans could always use some inspiration from the Gaines, whether it be relationship, family, or home goals. But one thing's for sure, they'll always have Waco.