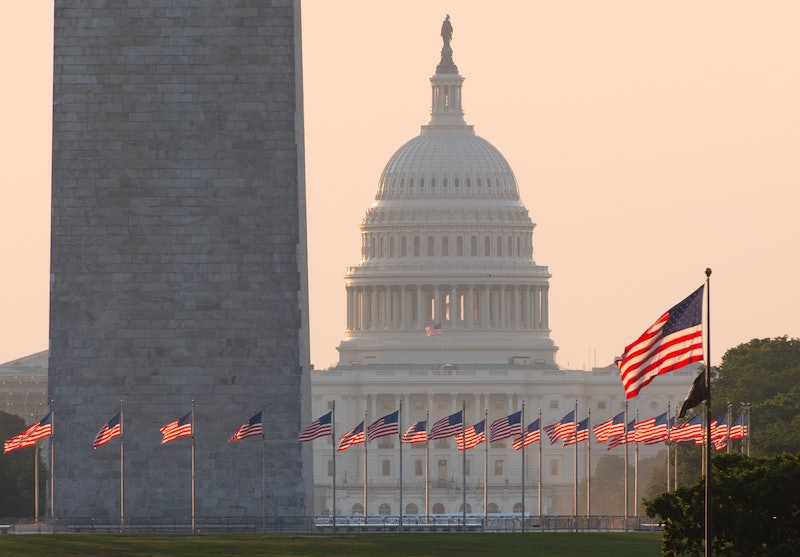 On Saturday, protesters are planning to march on the National Mall in Washington, D.C. to proclaim their support for "traditional American culture" and "the America first agenda." The event is called "The Mother of All Rallies," (MOAR) a name that is unnervingly similar to the "Mother of All Bombs" that U.S. forces dropped in Afghanistan in April.

The Mother of All Rallies "About" section on its website bills itself as a "grassroots movement" to "peacefully unite in honor of America." The event's Facebook page described the MOAR event as an "America First patriot rally in support of American values, American culture, American traditions, and of course President Donald Trump," adding:

Our goal is to rally 1 million patriots to Washington DC to send a shock-wave message to the world that they have to go through us to take this country or change its culture. This is a not for profit event and all the credit goes to all the participating patriots and not particular individuals or groups. This is about America First. This is about protecting and supporting President Donald Trump, protecting our Constitution, and protecting our flag and all that it stands for.

While event organizers claim the rally it's about patriotism, that appears to have a distinctly partisan bent. For starters, its speakers list includes names that are well-known among "alt-right" circles, such as Marco Gutierrez, who founded Latinos for Trump but is probably more famous for insisting that a Hillary Clinton presidency would result in "taco trucks on every corner"; Republican congressional candidate Omar Navarro, who's using the slogan "Make California Great Again" in his campaign against Rep. Maxine Waters; Peter Boykin, founder of Gays for Trump and host of a pro-Trump radio show; and several other medium-profile Trump supporters.

The so-called "MOAR Team" includes convicted felon Kyle Chapman — who also goes by Based Stickman — a Trump supporter who was videotaped beating anti-Trump protesters at a demonstration in Berkeley.

Then there's the "Mother of All Bombs" reference. In April, the U.S. dropped the GBU-43/B Massive Ordnance Air Blast, the largest non-nuclear explosive in the military's arsenal, into a cave in Afghanistan in an attempt to flush out ISIS militants. That explosive was colloquially referred to as the "Mother of All Bombs"; Afghan officials told the media that 94 ISIS militants were killed by the explosive.

It's possible that the name "Mother of All Rallies" isn't a reference to that bomb, but the event most definitely has strong pro-military bent. Several U.S. military veterans are scheduled to speak, and the event's web page links to a site that sells bullet necklaces and gives some of the proceeds to veterans. The rally will also feature a performance by the band Madison Rising, which aggressively supports the U.S. military.

The event organizers have attempted to distance itself from the white supremacist rally in Charlottesville, Virginia, that turned violent. The only flags allowed at the event, they say, are American flags, which means Confederate flags are not being encouraged. (Whether or not they do make an appearance on Saturday is a different issue.)

By all indications, the Mother of All Rallies is a pro-Trump demonstration. The absence of any progressive or Democratic speakers, as well as its explicit goal of "supporting President Trump" are two clear signs. On its website, the group notes under a heading about why people should attend:

If you believe in the founding fathers [sic] idea of America. If you believe we are the greatest country to ever exist. If you stand for patriotism and freedom this rally is for you!!

In any event, the Mother of All Rallies will face some stiff competition. It's taking place on the same day and in the same place as the Race to Beat Cancer, as well as the Juggalo March on Washington, a demonstration planned by supporters of Insane Clown Posse.