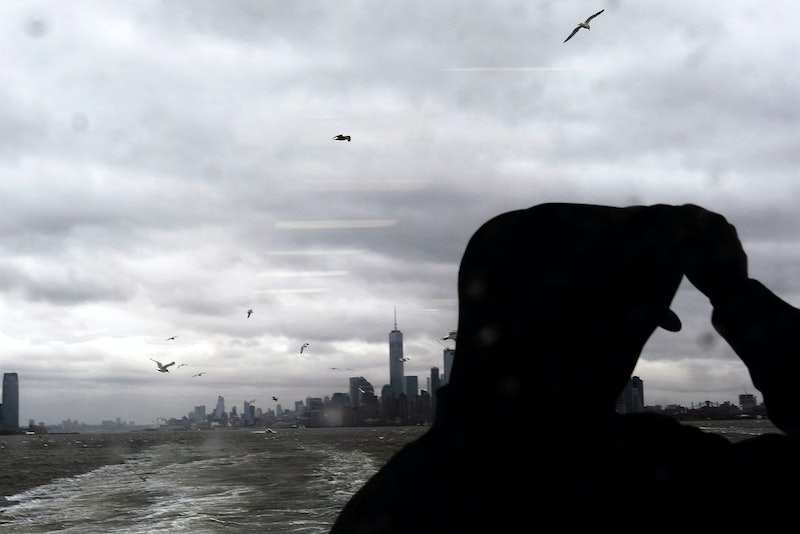 As Winter Storm Quinn grew in intensity on Wednesday, the Northeast and northern Mid-Atlantic regions prepared to be hit with up to two feet of snow in some areas. As you get ready for disrupted commutes and possible power outages, you might also find yourself wondering more about the nor'easter, like why it was named Winter Storm Quinn.

The names attributed to winter storms aren't as official as the ones given to hurricanes, which are set by the World Meteorological Organization and become their standard international labels. Instead, the titles of winter storms are determined by The Weather Channel, a cable channel that broadcasts weather forecasts across the country and is based in Atlanta. The channel first started giving out these names during the winter of 2012-2013.

But as with hurricanes, The Weather Channel uses an A-Z system for picking its names. Last week's nor'easter was "Riley"; this one is "Quinn." Normally the "Q" storm would go before the "R," of course, but Quinn actually received her name first, on Feb. 28. Riley was named the next day.

That's because Quinn was first to pass the "threshold" that helps The Weather Channel decide that a name is merited. According to a set of guidelines published in 2014, a storm receives a name if the National Weather Service (NWS) issues a winter storm warning across a certain "areal or population threshold." For the year of 2015-2016, that meant that 2 million people or 400,000 square kilometers had to be affected by a NWS winter storm warning.

The channel notes, however, that it "reserves the right to override the quantitative decision in certain circumstances" and gives the example of a "historical" event like "accumulating snow in South Florida."

Not everyone thinks that winter storms should be given unofficial names. For example, some people argue that these labels will only sow confusion unless they're agreed upon by NWS, which is a federal government agency. Others critique The Weather Channel's naming criteria, saying that a storm can be extremely memorable and impactful even if it does not reach across 400,000 kilometers or hit 2 million people.

The Weather Channel staunchly defends its practice and wants the national meteorologist community to come together to adopt a uniform naming system. In a 2015 column on the American Meteorologist Society blog, Mary M. Glackin — an official with the channel's former parent company, The Weather Company — argued that the widespread use of winter storm names on Twitter is proof that the titles are effective.

"Millions of tweets are sent using the hashtag from government agencies, school districts, utilities, businesses, and the general public," she wrote. "These hashtags also allow the NWS and others to find real-time weather data tweeted by citizens that can be used in nowcasts and other storm reports."

Names certainly can make it easier for people to communicate about storms. To explain the practice of naming hurricanes, The National Hurricane Center notes that "experience shows that the use of short, distinctive names in written as well as spoken communications is quicker and less subject to error than the older, more cumbersome latitude-longitude identification methods."

On Wednesday, some people on social media made fun of the storm's name as weather closed in.

The name "Quinn" is sometimes associated with hipsters. Twitter users poked fun at the connection.

The Weather Channel already has its winter storm names for the whole season picked out. After Quinn, the next storm that crosses the threshold will be called "Skylar." Twenty-two storms received names in 2016-2017 and 2015-2016, while earlier seasons saw totals in the high 20's.