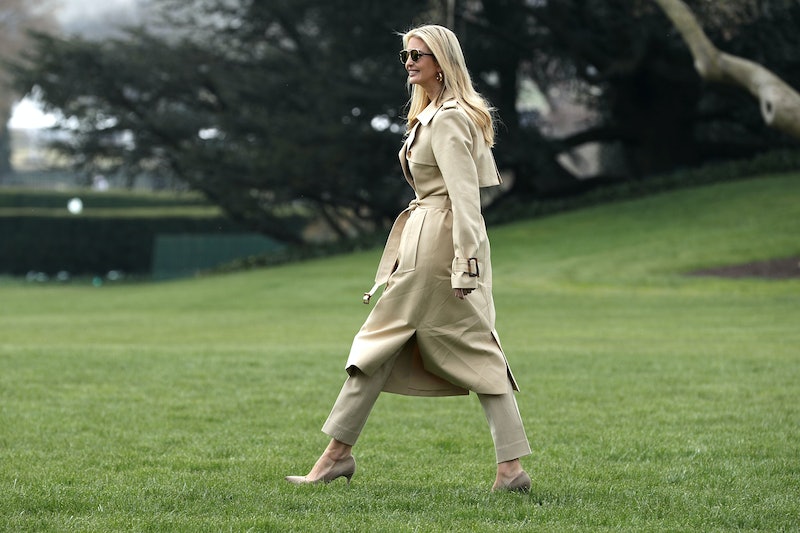 Ivanka Trump and Jared Kushner tend to flee the White House when things hit the fan, and this week is no exception. Ivanka is in Peru with her husband, she announced on Wednesday, to join Vice President Mike Pence for a major international summit at which the president can't appear.

The gathering is called the Summit of the Americas, and it's the only regular meeting of all of the leaders of the 35 nations that make up North and South America. President Trump was scheduled to attend, but decided to cancel his plans at the last minute to stay in D.C. and address the chemical bombing attack in Syria, as well as deal with the enveloping chaos at the White House. And that latter reason is exactly why people think his daughter and son-in-law were so eager to skip town.

As Politico reported, the couple has "been known to leave town at times when politics turned especially messy." That's certainly the case right now. This week has held many important developments for both the special counsel investigation and Stormy Daniels scandal: The FBI raided the office of Michael Cohen, Trump's personal lawyer. Another episode where the president reportedly tried to fire Robert Mueller came to light. Mueller was revealed to be investigating a $150,000 payment from a Ukrainian businessman to the Trump Foundation during his campaign.

Unlike some of Ivanka and Kushner's past escape getaways, this will be a work trip for the couple. "Excited to join the US Delegation to @SummitAmericas in Peru, where we will discuss the importance of public-private collaboration to promote investment & sustainable development," the first daughter tweeted on Wednesday. "I look forward to highlighting our women's economic empowerment efforts in the region."

Ivanka will reportedly reveal the details of a new economic program to help empower women of the Americas at the summit. No further information about the program is yet known, but more should come out during the two-day gathering.

With Pence, the pair will also likely meet some heads of state and discuss issues relating to the theme of this year's conference, "Democratic Governance Against Corruption." Without the presence of the president, some are skeptical that the summit will be productive. "It's going to be a lost opportunity for the United States to shore up its relations with Latin American countries," Harold Trinkunas, an expert on Latin America foreign policy, told The Washington Times.

Politico noted several other times when the first daughter and her husband have left D.C. during particularly dramatic times. During the violence in Charlottesville at a white supremacist rally, for example, the pair went vacationing in Vermont: They were there when the president made his now-infamous comment about there being "blame on both sides" in the protest and counter-protest. The trip was reportedly pre-planned, but that didn't make its timing feel more appropriate to a grieving country. A group of concerned citizens protested Ivanka and Kushner's visit in the small Vermont town of Waitsfield.

Then there was the time that they took a skiing trip to Aspen, Colorado with their children while GOP efforts to repeal Obamacare were going up in smoke. The president was reportedly angry that Ivanka and Kushner had opted to take a vacation at that time; a source told CNN that he was "upset that his son-in-law and senior adviser was not around during this crucial week."

A source told Politico that the couple tries to use getaways to prevent themselves from being associated with White House scandals and chaos. In particular, they reportedly want to stay far away from matters relating to the special counsel investigation and from the drama surrounding John Kelly, the White House Chief of Staff.