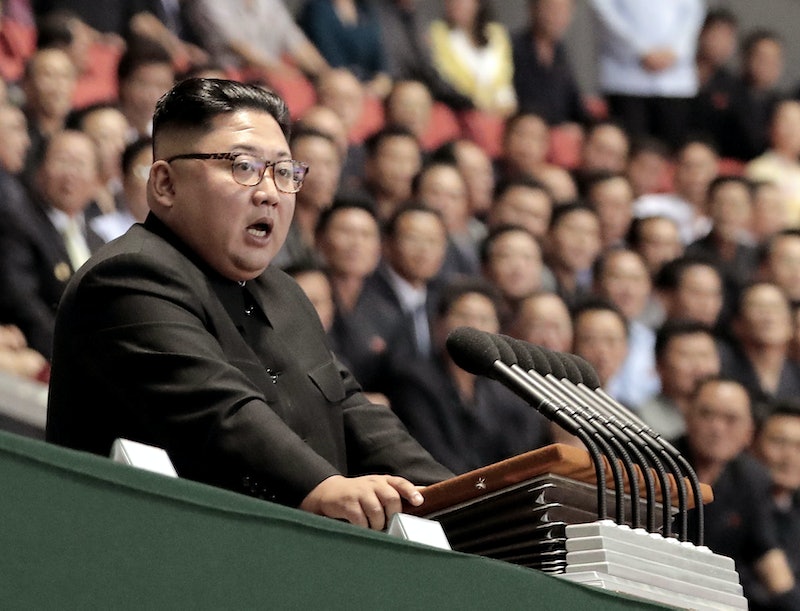 Less than a year after committing to the denuclearization of the Korean peninsula, President Donald Trump and North Korean leader Kim Jong Un will meet again to continue denuclearization talks. The two men will come face-to-face for the second time on Wednesday at a summit in Hanoi, Vietnam. But while Trump carries the title of president, his North Korean counterpart is commonly known by as the supreme leader. But Kim Jong Un's title may not actually be official.

According to The Encyclopedia Britannica, Kim's designation as North Korea's supreme leader — a label he garnered in December 2011 after the death of his father Kim Jong Il — is actually "an unofficial title" designed to signal his position as head of both the country's government and military.

While "supreme leader" may not be one of his official titles, Kim certainly isn't lacking for honorifics. In fact, he's been formally bestowed with a bevy of titles, although he's still commonly referred to as "supreme leader" in the media (often at the insistence of North Korean media minders, according to The Independent.)

In 2016, Reuters reported that North Korean Parliament had granted Kim a new title, extending his full official title to read: "the Dear Respected Comrade Kim Jong Un, Chairman of the Workers' Party of Korea, Chairman of the State Affairs Commission of the Democratic People's Republic of Korea and Supreme Commander of the Korean People's Army."

Kim and Trump's upcoming Hanoi summit came about after the North Korean leader first broached the idea of a second meeting with Trump earlier this year. In a televised New Year's address, Kim noted he was willing to continue nuclear disarmament talks that had began during a bilateral summit held in Singapore in June. The North Korean leader also reiterated his commitment to denuclearization.

"The statements and agreements after the summit with the United States were that we are going toward complete denuclearization of the Korean Peninsula, and that is my resolute commitment," The New York Times quoted Kim as having said. "We will not make nuclear weapons and we will not proliferate nuclear weapons, and I have said this, and I will say this again now."

But while Kim said he was ready to renew negotiations for denuclearization with Trump, he also issued a warning. According to NPR, Kim said the communist country "may be left with no choice but to consider a new way to safeguard our sovereignty and interests" if the United States continued to "insist on sanctions and pressures" and failed to keep the promises it made "in front of the whole world."

Kim also warned Washington not to "misjudge the patience of [North Korean] people by unilaterally demanding certain things," the Associated Press has reported. What's more, Kim said his country was unwilling to continue progress toward denuclearization until it saw the United States take "corresponding measures."

It's hoped that the two leaders will come out of their Hanoi summit with a considerably more substantial agreement for denuclearization than the vague pact hammered out in June.