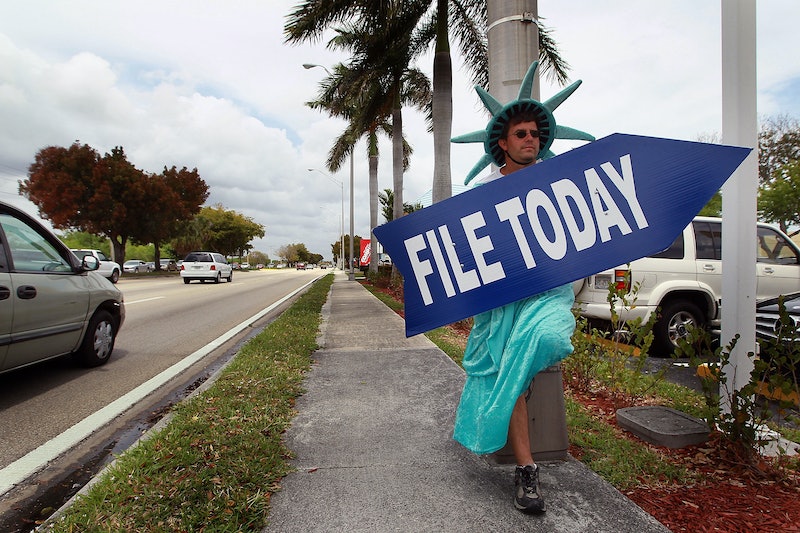 After the government shutdown was finally called off and the government recently funded through September, Americans can finally turn their attention to their taxes. But as more Americans begin filing their returns with the Internal Revenue Service, the question of "why is my tax refund lower this year" has been dominating social media and headlines.

This is the first tax season under the Republican tax overhaul passed in 2017.

NPR reported on Thursday that one of the reasons tax refunds have been smaller is because of "reduced withholding," leading to bigger paychecks throughout the year.

A spokesperson for the Treasury Department said the lower tax refunds are actually a positive thing for Americans, according to CNN:

Most people are seeing the benefits of the tax cut in larger paychecks throughout the year, instead of tax refunds that are the result of people overpaying the government. Smaller refunds mean that people are withholding appropriately based on their tax liability, which is positive news for taxpayers.

However, the IRS has also received fewer tax returns than at this time last year. At this time in 2018, the agency had received nearly 31 million tax returns, but has only received 28.7 million returns, a 6.9 percent decline.

H&R Block's Tax Institute Executive Director Kathy Pickering told USA Today that it's hard to gauge the impact of Trump's tax reform on refunds this early in the season. "We have said people will be surprised, but how that comes out in the aggregate is to be seen. Don't put too much into these initial numbers from the IRS, because the volume is down, and it may be hard to parse out the tax reform impact from the shutdown impact," Pickering told USA Today.

While it's still early in tax season, it hasn't stopped tax payers from worrying. WBUR, a NPR station, reported that "about a quarter of people" who typically see a tax refund won't be getting a refund in 2019. "We do expect that more people will owe money when they file this year. In particular, there may be people who have gotten refunds in the past who will owe money," IRS spokesperson Eric Smith told AARP.

AARP reported there were "updates to the federal tax withholding tables" that could have led to the change in what tax payers saw at the end of their tax bill. "You've been receiving the tax cuts every two weeks," Nicole Kaeding, director of federal projects at the Tax Policy Center, told Money.

But that doesn't necessarily assuage some tax payer's worries. As PBS News Hour explained: Tax refunds can be an annual large "cash infusion" for low-income households.

Tax Day is Monday April 15. We'll see if the trend of lower refunds stays true over the next two months.