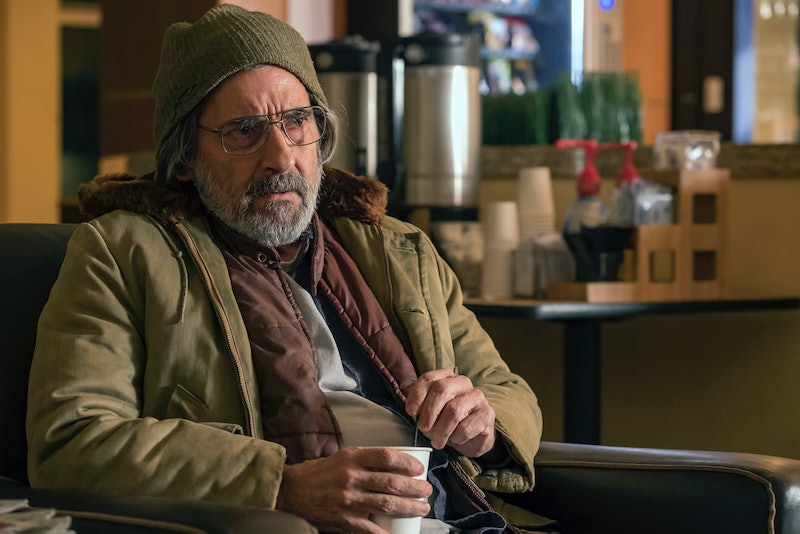 Spoilers ahead for the This Is Us Season 3 finale. Nicky Pearson is known for popping up unexpectedly on This Is Us. For the majority of the first three seasons of the show, viewers believed that Nicky had died at war in Vietnam — because that's what Jack said had happened. It wasn't until midway through Season 3 that the show revealed that Nicky was still alive and in the Pennsylvania area. So viewers shouldn't be too surprised that Nicky was there in the This Is Us Season 3 finale, attending to Rebecca's bedside in the flash forward. What's more, the rest of the Pearson clan didn't seem at all surprised that Nicky was there, so Jack's brother must have mended fences long ago.

The last time viewers saw Nicky, he was telling Kevin that being around him and the rest of the Pearsons was just too painful. But the writers laid the groundwork for Nicky's return in his final conversation with Kevin. "It was a pleasure to meet you, and maybe I'll see you again," Kevin said. "Maybe," Nicky answered. Now that maybe is a definitely, because Nicky was in the flash forward sitting at Rebecca's bedside. It seems she has Alzheimer's now, and she didn't speak in the sobering scene.

But Nicky was right there with her, and it may be because of Rebecca's own speech to him earlier this season that Nicky was able to patch things up with his family.

In Season 3, Episode 12 — the last one Nicky was in before the finale — Rebecca got right to the point with him. "You know, when I found out that you were alive, I didn't want to meet you 'cause I didn't want to unravel what Jack had always told me," Rebecca said. But she softened a bit and explained to Nicky that she thinks Jack would have eventually made up with Nicky had Jack not died.

"Well, he missed his chance," Nicky answered gruffly. Rebecca replied, "Yeah, he did. But you still have a chance to make things right, because I'm here." Nicky then shared a sweet memory of building a tree fort with Jack as children, giving Rebecca a much-needed peek into her late husband's past.

If Jack missed his chance with Nicky, Nicky didn't miss his with Rebecca. After pledging to Kevin in Episode 12 that he would try going to a meeting at the vet center to start his PTSD healing process, he seems to have eventually found his way back into the Pearson family's lives. Rebecca seems to be living at Kevin's house since she's sick in the future. Perhaps Nicky is also living there? There's no denying that Kevin had a soft spot for his uncle, he would undoubtedly have made room for him in his big house along with his mother.

Viewers' questions about Nicky and the rest of that shocking flash forward won't be answered until Season 4 premieres this fall, but at least we now know that Jack's brother found his way back home eventually.

More like this
You'll Never Guess Which Hollywood A-Lister Big Mo Is Related To IRL
By Sam Ramsden
What’s New On Netflix: Lana Condor’s Ghostly Comedy & A Sexy Reality Series
By Arya Roshanian
Natalia Dyer Opened Up About Steve & Nancy’s “Lovely” ‘Stranger Things’ 4 Dynamic
By Grace Wehniainen
Lizzo Proved She’s Team Jeremiah During Her ‘The Summer I Turned Pretty’ Review
By Grace Wehniainen
Get Even More From Bustle — Sign Up For The Newsletter