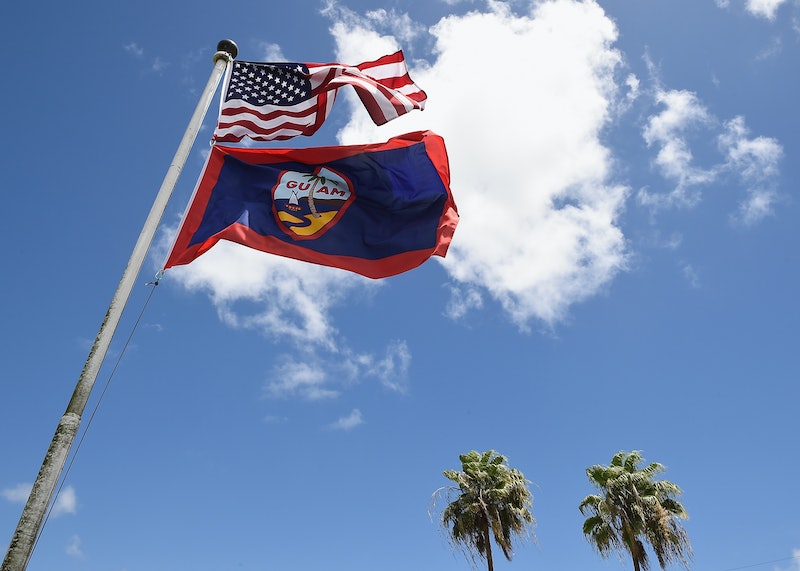 Tensions between the United States and North Korea have skyrocketed over the last couple of days, with President Trump threatening to unleash "fire and fury" on the hermetic country and North Korea state media announcing plans to attack near the island of Guam. Although that sounds preposterous, there are a couple of different reasons why North Korea is threatening Guam.

"The KPA Strategic Force is now carefully examining the operational plan for making an enveloping fire at the areas around Guam," North Korean state media wrote Tuesday, adding that American military bases on the island "get on the nerves of the DPRK."

The most immediate question is why Guam, of all places? Although only North Korean leader Kim Jong-un knows for sure, it's likely a result of Guam's unusual geographic, political, and military status. Guam is a U.S. territory, complete with American military bases. However, it's thousands of miles removed from the mainland United States — in fact, it's much closer to North Korea than most other American territories. If North Korea attacked Guam, then it could theoretically accomplish the goal of striking U.S. military bases without requiring a missile capable of reaching the U.S. mainland. It's unclear whether North Korea possesses such missiles, but if it attacked Guam, it wouldn't need them.

It's crucial to understand, however, that North Korea's threats against the United States are intended largely for domestic propaganda purposes in the DPRK. One of the most time-honored ways for a leader to maintain unity in his or her country is to conjure up the specter of a hostile foreign enemy, and America, Japan, and South Korea have been serving this purpose in North Korean lore for decades.

“The greatest threat [to North Korea] is from within,” Daniel Pinkston, a former Korean linguist in the U.S. Air Force, said in an interview with The Diplomat in 2016, explaining that painting the picture of imminent war is "a good strategy to keep everyone afraid.” He added that he believes Kim's threats are "mostly directed at the domestic audience in North Korea."

This isn't to say that the situation is all hunky-dory, or that there's no reason for Guamanians to fear a North Korean attack. But if past is any precedent, the most recent threats from Kim will remain just that — threats.