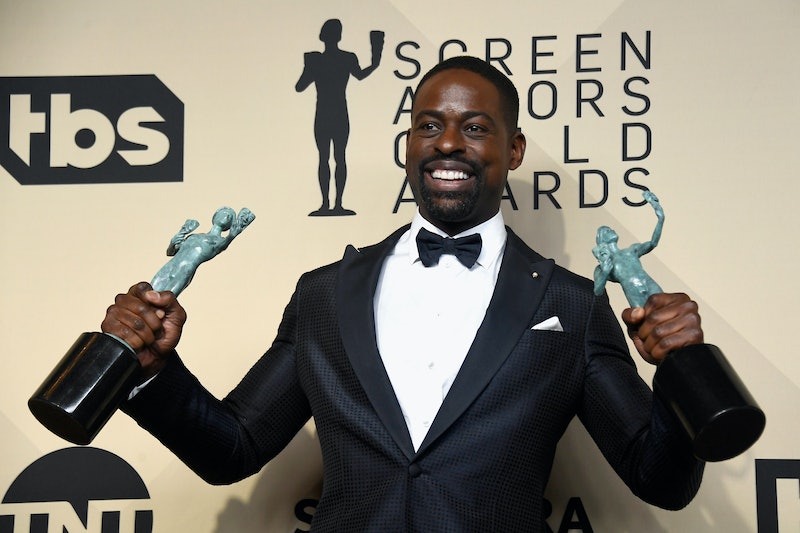 Awards season is here, and from Golden Globes to the Academy Awards, there are a lot of red carpets to keep up if you want to see your favorite celebrities. One red carpet, however, is going to be very different this year. The 2019 SAG Awards red carpet is a silver carpet. Why? Because it's going to be made of aluminum foil. No, this is not a joke. Yes, there is a valid reason why. However, it doesn't stop the idea of a shiny aluminum foil carpet from being any less odd.

Obviously, not all red carpets are actually red. The MTV Video Music Awards carpet is actually pink. Last year's Emmy Awards carpet was gold to honor its 70th anniversary. While the pre-show fashions are almost always referred to as the red carpet, it may not actually be red. That'll be the case with the SAG Awards in 2019.

According to the official website of the Screen Actors Guild, Reynolds Wrap will be sponsoring the show on Sunday, Jan. 27, and they're helping to celebrate the award's 25th anniversary. The traditional color for a 25th celebration? It's silver, which means the partnership between SAG and Reynolds Wrap makes total sense.

Here's the most interesting (and maybe the most odd) part of the silver carpet, though. It's actually going to be made of Reynold's Wrap. How that's going to work hasn't been revealed, but you may be able to expect a whole lot of shiny metallic moments if the carpet keeps the look of the original product.

The aluminum foil brand isn't just creating the red carpet, though. They're also donating to the Screen Actor's Guild foundation. The organization helps to assist members of the Guild as well as the foundation's outreach program Storyline Online, which supports children's literacy.

As for who you'll be able to see on the new silver carpet at the SAG Awards? There's a long list of both presenters and nominees. Will & Grace's Megan Mullally will have hosting duties, so there's no doubt you'll see her make an appearance. You can also expect some actors from major 2018 hit films like Henry Golding, Constance Wu, and Michelle Yeoh of Crazy Rich Asians as well as popular television and streaming platform actors like Sterling K. Brown of This Is Us and Sandra Oh of Killing Eve. That's the thing about the Screen Actors Guild Awards. It presents honors to both film and television meaning that stars from both the big and small screen will be present.

If you want to see what a silver carpet looks like, the Reynold Wrap aluminum foil SAG carpet will give you the chance this weekend. The Screen Actors Guild Awards will air on Jan. 27, and according to the official site, you'll be able to stream the pre-show beginning at 5:30 PT on PeopleTV, the SAG website, TNT Drama, and Entertainment Weekly. Now, you have no excuse to miss seeing what an aluminum foil red carpet looks like and some fashion forward celebrities, too.