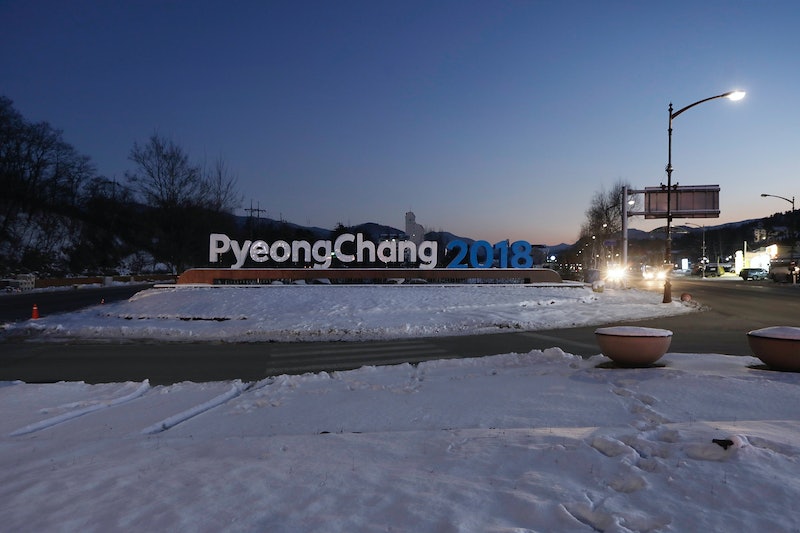 This year, the South Korean resort town, PyeongChang, will host the 2018 Winter Olympics. Sometimes, the town's name causes confusion because the middle C, technically, should be capitalized, though not every publication follows that rule. The reason why PyeongChang's C is capitalized isn't because of any storied local history, but rather, so that it won't be mixed up with somewhere else.

PyeongChang, it turns out, sounds like and is spelled similarly to a place in the media much more often — Pyongyang, the capital of North Korea. In fact, there was at least one instance in 2014 when a man reportedly traveled to Pyongang instead of PyeongChang by accident.

Sapit, a Kenyan man and member of the Maasai tribe, believed he had boarded a flight to PyeongChang, but according to NBC News 4, when the plane landed, he found out he wasn't even in the right country. He was in North Korea, the reclusive state just north of his intended destination.

The story was initially reported by The Wall Street Journal. According to NBC, Sapit started to guess he was in the wrong place when he couldn't find any of the landmarks one might expect to see in a major city. From the window of his landing plane, he saw a tiny airport where he expected the modern Seoul Incheon Airport to be.

"By the time we were getting off the plane, I had an eerie feeling that this was not Seoul," he said, according to NBC. Thankfully, he was sent back to Kenya. However, he did reportedly have to pay a $500 fine and sign a document saying that he would never again return to North Korea without a proper travel visa.

While most news outlets continue to spell PyeongChang without the capitalized middle letter, the city, in conjunction with the Olympic Planning Committee, revised the city's spelling to decrease the chance of further mix-ups. This is especially important as thousands are expected to travel to the city to watch the Winter Games. The middle "C" capitalization wasn't the only thing to change, either. The "E" is new, too — yet another attempt to differentiate the South Korean town from its neighbor's capital.

The spelling change was doubly important because not only does PyeongChang sound eerily similar to Pyongyang, the town itself is less than 50 miles from the demilitarized zone that separates the two countries, thus increasing the potential for disastrous mistakes.

South Korea has been planning to host the 2018 Winter Games since 2011. As of now, it's slated to shell out somewhere in the vicinity of $13 billion on the event. That money goes or has gone toward building a massive stadium, highways, bridges, and other structures needed to accommodate the games.

Notably, the main stadium, which will host both the opening and closing ceremonies, will only be used a handful of times. After the Winter Games end, the stadium, which reportedly caries a price tag of $109 million, is slated to be torn down. The reason? — No one else would probably use it.

This is often the case for Olympic facilities built by host cities. Massive complexes are built to host international sporting competitions, and then they sit vacant. But in lieu of adding to the ever-growing (and decaying) Olympic structures sitting vacant around the world, South Korea has reportedly already opted to plan on taking the building down.

In an ideal world, hosting the Olympic Games bolsters the economy for host cities, though whether this works out in the end is frequently contested. But, even if the games become a distant memory in South Korea, PyeongChang is hoping that its locale — and its altered spelling — sticks in your mind.