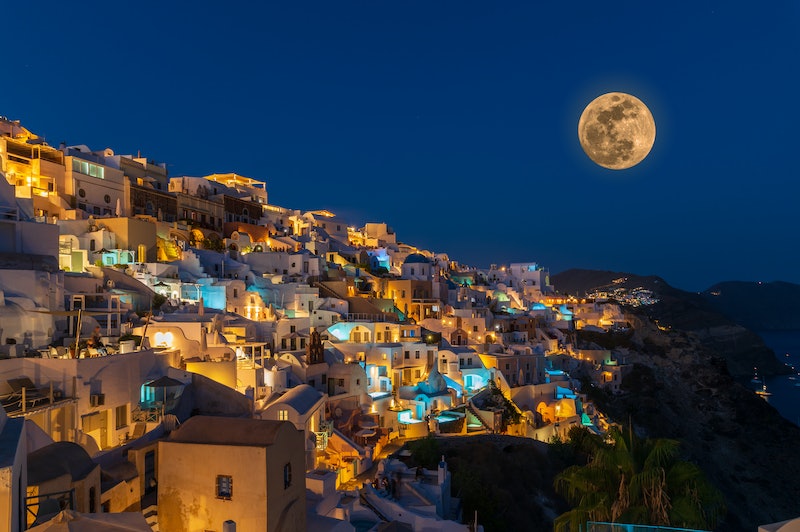 Better bundle up, people, because the Frost Moon is coming our way this month. If you're anything like me and are left wondering why every month seems to have a moon name — and more importantly, why, when it's 70 degrees outside in New York City, the November moon is called the Frost Moon — then hey, that's a good question.

Moon names have deeply-rooted ties to Native Americans tribes, who named them. These nicknames were effectively the primary means of telling the date and time and in an effort to keep their seasons in order — so, as a result, most of the names had a tendency to correlate directly with an activity or an event that took place at the time in each location. Most of these are weather-related, like February's Snow Moon and May's Flower Moon. Of course, these nicknames vary depending on the location and belief system of each individual tribe — for instance the Cherokee tribe in the Carolinas would have a different name and interpretation for each lunar cycle than the Cheyenne and Lakota tribes living in the Great and Northern Plains would.

Like clockwork, a full moon happens every 29 and a half days when the moon is completely illuminated by the Sun's cosmic rays. It occurs when Earth is directly aligned between the Sun and the Moon. Typically, there are three full moons in between an equinox — which, in 2017, we just experienced on Sept. 22 — according to the website EarthSky.com. Additionally, Seven times in 19 years, four full moons fall in a single season. In that case, the third of a season’s four full moons is also called a Blue Moon. The last Blue Moon by this definition happened on May 21, 2016 and the next will be on May 18, 2019. Aka, the phrase "once in a blue moon" — it's rare.

Though the harvest moon usually steals the (moon) shine and is the most commonly known full moon event every year, each month has its own special moon, and by proxy, its own moon name, which were passed down from the Native Americans to the colonial settlers, who adopted these names and incorporated them into the modern calendar, according to The Old Farmer's Almanac.

So, what about the Frost Moon, and how that name came about? While there are a couple of different theories as to how November got its moon name, one idea is that the Native American's dubbed it a "Beaver Moon" after the busy little beavers who were building their winter homes during time of year, according to website Timeanddate.com. As a nocturnal animal, beavers work under the light of the full moon. It was also likely called the Frost Moon because November was generally the time that the first snowfall and frost would hit the ground. The other theory, according to The Old Farmer's Almanac, was that the Beaver Moon or Frost Moon "was the time to set beaver traps before the swamps froze, to ensure a supply of warm winter furs."

Now, the Frost Moon was given its name because it's the first full moon in the November lunar calendar, which we can expect to see in all it's full frost glory on Nov. 4 this year. Another common name for the November full moon aside from the Frost Moon are the Mourning Moon, although these origins are even more unknown that that of the Frost Moon.

In the meantime, you can expect to see the full Frost Moon in all of its frosty glory on Nov. 4. Set your calendar, because this is not one to miss.