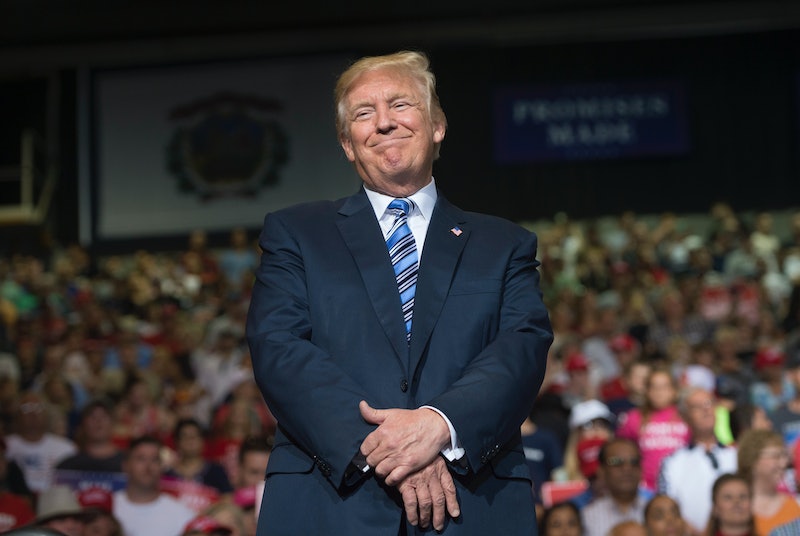 On Tuesday evening, President Donald Trump is scheduled to appear at a political rally in Phoenix, Arizona, one week after igniting intense criticism for doubling down on his "both sides" response to white supremacist violence in Charlottesville, Virginia. Although he'll likely see thousands of supporters turn out to see him, the president is not being universally welcomed — especially as the city's Democratic mayor has made it publicly clear that he doesn't want the rally to happen. It all raises an obvious question: Why is Trump still holding rallies, in Phoenix and beyond?

It's been a startling trend throughout the early months of his first term. While previous presidents have generally abandoned the campaign-style rally circuit after they've been elected, Trump has seemingly kept his political operation in a state of semi-permanent campaign. Over the past seven months, he's held similar campaign-style rallies in Florida, Ohio, and Tennessee.

So what gives? Why is Trump simultaneously governing the country while hitting the trail, often repeating some of his campaign-era lines that don't sound quite the same as president? There are a few different ways to look at it, though all of them come back to the basic fact that he clearly enjoys doing them.

One real part of the drama on Tuesday night is that Trump is reportedly considering a pardon for one of his longtime supporters, former Maricopa County sheriff Joe Arpaio. The 85-year-old Arpaio was found guilty of criminal contempt of court in 2016 for willfully ignoring an order to stop discriminatory, baseless roundups of people he suspected of being undocumented immigrants.

But such a pardon could be done regardless of Trump's presence in Arpaio's home state, and as such, it doesn't explain the insistence on yet another campaign-style rally.

One possible interpretation is that Trump uses these sorts of rallies ― reportedly not as well-attended as the ones he had during the campaign, but still thick with extremely devoted supporters ― as a means to distract and deflect from other prominent issues in the the news cycle, a way of forcibly turning the page by generating new events, and even new controversies, to distract everyone with. After a couple weeks of intense scrutiny, it'd be no surprise if he viewed the Phoenix rally as that sort of opportunity.

Another angle, however, is the fact that his next campaign has actually already begun. He's already fundraising, and more to the point, he's already released a commercial for his 2020 reelection campaign. In that light, you could fairly call what's happening in Phoenix on Tuesday night a 2020 campaign rally, albeit a few years early.

The third and simplest answer, however, is that Trump relies on these kinds of adulation-fueled events to boost his mood and recharge his batteries. It's plain to see from watching his public rallies since becoming president ― and accepting all the criticism that comes with the job ― that he gets extremely excited and vociferous when he's working a crowd of his fans, sometimes to his own detriment.

Of course, it could also be a combination of them, or even all three at once. Given Trump's reportedly immense enjoyment of the adulation and energy that the rallies bring, his notorious skill at elbowing news out of the spotlight by generating newer, sometimes even more problematic news, and the fact that he wants to protect his base of support in the event he runs for reelection, it's not that hard to see why he's spending his night in Phoenix, even if it's difficult to imagine another president doing the same right now.