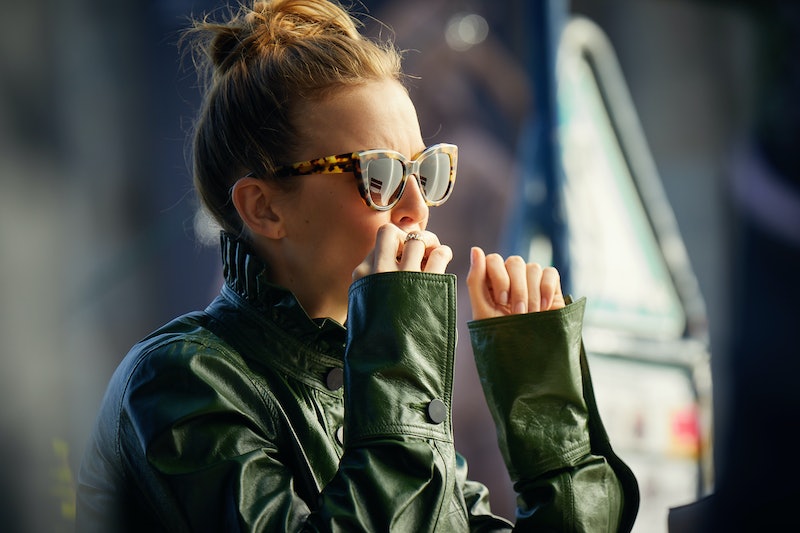 The third episode of BBC's new spy thriller Killing Eve (spoilers ahead!) saw Eve Polastri tracking her mysterious female assassin all the way to the German capital, only to have Villanelle spin around on her sensibly-yet-stylishly clad heel and track Eve right back... In fact, Villanelle's obsession with Eve on Killing Eve has taken a turn for the stalkerish. In the laundry list of Villanelle's crimes, stalking is actually not such a bad one, but it does seem unusual that she's become so interested in someone who isn't one of her "work" targets. What is it that makes this ice cold killer stop and actively long to reach out to the scattered spy that's trying to catch her?

At the end of Episode 2, Konstantin warns Villanelle it's a bad sign that Eve and her fellow agents have turned Villanelle into the subject of a special investigation. He instructs Villanelle to keep a low profile — advice which she promptly disregards by using Eve's name to murder the Chinese Colonel. This is Villanelle's first direct attempt to get Eve's attention (the scene where they meet in the bathroom in Episode 1 doesn't count because they didn't know they were meeting, although even then Villanelle couldn't resist making contact).

Using her name is a childish move and super show-offish, not to mention freaking cruel, but it is 100 percent effective. Eve comes running and Villanelle gets the chance to observe her to her cold heart's content.

Actor Jodie Comer, who plays Villanelle, gave some insight on Villanelle's motivations to Bustle's Leah Thomas. She explained that when Villanelle finds out that Eve has been tracking her so closely,

"Her ego goes through the roof. Not only is it [Eve] a woman, but she wants to find out about her. So at first it's intrigue and I think it's fascination. I think she's fascinated by Eve and her normal life. You know, her mundane life is totally opposite to Villanelle's."

Episode 3, "Don't I Know You" perfectly illustrates that fascination. When Eve arrives in Berlin, Villanelle is already waiting. She snatches Eve's suitcase, and, rather than search it for evidence or do any of the other typical spy-movie cliches, Villanelle obsesses over Eve's personal items. First she takes out a tube of Canesten, a medicine for treating yeast infections, and actually utters the words "Poor baby." Is Villanelle just morbidly fascinated, or does she actually feel bad for Eve?

Next she uses Eve's clothes to dress up the Eve stand-in she's been sleeping with, and even wears the scarf herself, tucked safely underneath her jacket. This sexually-charged part of the storyline seems more like a way for Villanelle to feign possession over Eve, as opposed to actual lust. But then again, there does seem to be plenty of sexual tension between the two, and Eve's admission this episode that she'd never been with a woman does seem like some serious foreshadowing...

Later, Villanelle follows Eve to a clothing store, watching her try on a new dress. Villanelle leaves a belt for Eve to try, and it turns out to be just the accessory her outfit was missing. This is the second time Villanelle has directly affected Eve's look. On one hand, she could be just trying to do something nice for Eve. On the other, she could be trying to push Eve in the direction of becoming more like herself. Based on the behavior we've seen so far from Villanelle, the latter is probably more likely, but I wouldn't rule out the first option just yet, either.

In an interview with Collider, Comer hinted that Villanelle's fascination with Eve might not be as simple as just opposites attracting. She explained, "There is a connection with Eve, on a personal level for Villanelle, because she reminds her of someone who is very close to her, in her past. It brings all of these emotions up."

Comer also went on to tell Collider that Villanelle's pursuit of and obsession with Eve will be a driving force for the rest of the season, pushing the two women together. With Dom and Bill both already out of the way, the number of people standing between Eve and Villanelle is dwindling rapidly. The two will have to face off sooner or later. The question is, will Villanelle's obsession with Eve keep her from killing her, or will Eve have to rely on her own specific set of skills to stay out of harm's way in the future?