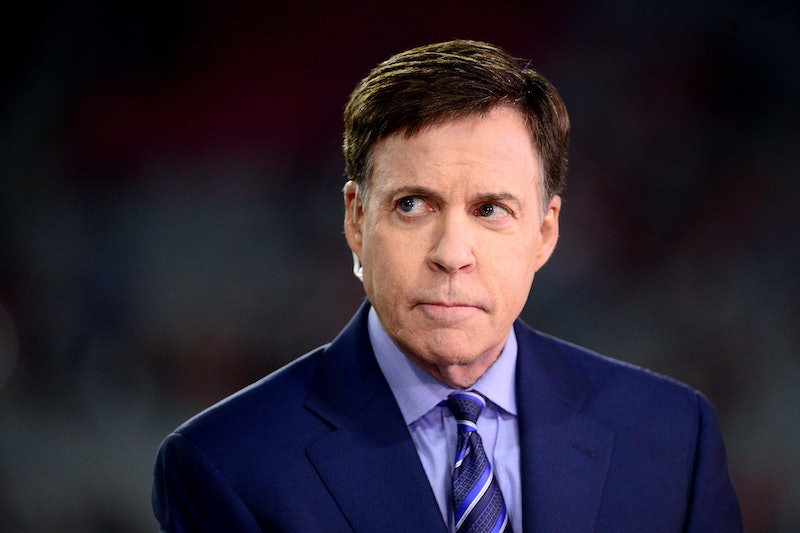 If you can't remember an Olympics without veteran NBC reporter Bob Costas, you're not alone. Many people who have been glued to their devices since the PyeongChang Winter Olympics opening ceremony are wondering: Why isn't Bob Costas hosting the Winter Olympics? Costas, 65, has been a fixture on the Olympic scene since the 1992 summer games in Barcelona, and viewers have developed an affinity for the reporter similar to the adoration people had for Dick Clark's long reign over the New Year's Eve ball drop in Time's Square.

AOL reported that Costas actually stepped down last year and passed the torch to Mike Tirico, 50. However, because 2017 was not an Olympic Games' year, many people likely missed it. In a statement published last February, Costas said, "It has been both a privilege and an incredible personal and professional experience to have been part of NBC's Olympic coverage all these years," ABC News Sports reported.

"I'm especially appreciative of all the talented and dedicated people I worked for and with on those broadcasts. I always felt that, in a certain sense, I was carrying the ball for them. It's been a wonderful run, but I just felt now was the right time to step away and I'm grateful that NBC left that decision to me."

In October, Syracuse University's Newhouse School released a statement about Costas passing the Olympic torch to Tirico, a "play-by-play announcer for NBC Sports Group, which he joined in 2016 after a 26-year career with ESPN." Tirico, who is a 1988 graduate of Syracuse University's Newhouse School of Communications, received the Marty Glickman Award for Leadership in Sports Media on Nov. 14, 2017. Costas is a 1974 graduate of the same school.

"Tirico has often remarked that he chose to study at Syracuse University because he knew Costas had attended the school," the Newhouse School reported. "In 1987, Tirico was the first recipient of the Bob Costas Scholarship, given to an exceptional broadcast journalism student." While many are sad to see Costas go, the knowledge that he handed the reigns to a close friend should soften the blow.

"There’s been a longtime friendship there. I don’t think that’s overstating it. And I can’t imagine this job changing hands more smoothly," Tirico told Rick Maese in a Q&A with the Washington Post. [...] "Bob set a standard for the amount of times he did this and the way he did it that likely won’t be matched ever again. So I’m not replacing him; I’m following him. I think trying to be Bob would be stupid. And that was one of his bits of advice: Be yourself. So I’m going to try to do that." And, clearly that's good advice because, pink eye and vodka is a tough act to follow.

Tirico did assume some hosting duties at the 2016 Summer Olympics in Rio. He acted as the daytime host and was the commentator for the closing ceremony, according to ABC News Sports. And, with respect for his predecessor and mentor, Tirico's statement last year suggests he's ready for his new gig.

"The level and longevity of Bob's tenure have left an indelible mark on American television and the Olympic Games," Tirico said as reported by ABC News Sports. "I am honored to call him a friend, humbled by this opportunity, and thankful to the many people who have helped make this possible."

So, if you've been saying, "what about Bob?" to your bestie and your BAE all day, rest easy in the knowledge that Costas is likely enjoying watching the Olympics from a different perspective for the first time since 1992. From his couch, just like you.