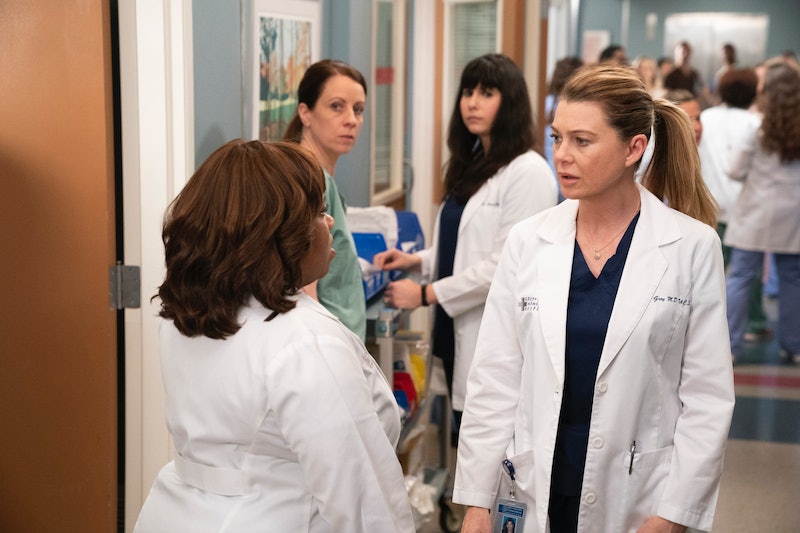 Grey's Anatomy has been on for, oh, 15 seasons of heart-stopping, tearjerking fun and romance, but just because we've been watching the show for a decade and a half doesn't mean that it's not jarring when suddenly, we tune into ABC at 8:00 p.m. ET, and Grey's Anatomy isn't there. Even in reruns! Even in bad episodes! But on April 25, the longest-running primetime medical drama in history will not be showing a brand-new episode, despite the cries of fans. Why isn't Grey's Anatomy on tonight, anyway?

While it is only just spring and baseball season has barely just started, Grey's Anatomy is taking a breather for a week because of... football season. Bustle reached out for comment to ABC, and the network confirmed that it is giving Grey's a break in order to show the 40th consecutive NFL Draft for the first time in its complete entirety — we're talking every drafting detail here — which will air from 8:00 p.m. ET until 11:30 p.m. ET to 11:30PM the evening of April 25, 2019. Grey's Anatomy will be back the week after, on May 2 to begin its quick descent into sweeps week and the end of Season 15 for all the characters at Grey Sloan.

According to a press release, the draft will actually run from April 25 to April 27, with the first three rounds broadcast in primetime. If this is the sort of thing you're really excited about, you'll be happy to know that "all seven rounds of the draft will be streamed live on the ABC App, ESPN App, broadcast on ESPN Radio and available in Spanish — on both TV and radio — on ESPN Deportes." You can also catch the draft on The NFL Network, if you want to feel even more sportsmanlike. A

ABC stated in a press release that ESPN (also owned by The Walt Disney Company, which owns ABC) and ABC have put together over 600 player highlight packages, over 360 hours of NFL Draft content across all networks, and more than 100 team graphics for the event. They are also laying about 150,000 feet of fiber-optic cable just to bring the NFL Draft live to its customers for three days — this is a big deal.

Of course, many people who care about Grey's Anatomy absolutely do not care about the NFL Draft, and on Thursday, April 25, these people will have to wait and dream about what's to come on the rest of Season 15 of Grey's Anatomy. Right now, the show's biggest untied thread is that of Jo Wilson Karev, who discovered that she was born because her mother was raped.

Jo is spiraling, as she won't talk to her husband, and she won't even talk to Link, one of her closest friends from medical school. Jo is drinking at the hospital, she's shirking her duties, and she could lose it all if she's not careful. Hopefully, the last few episodes of Grey's Anatomy Season 15 will fix this gaping hole, because honestly, most things are going OK right now. Meredith is in love, Catherine Fox's cancer is under control, and Teddy is about to have a baby. What could go wrong? (That's a question you should never ask on Grey's Anatomy.) For now, though, Grey's fans will have to wait just one extra week to find out.