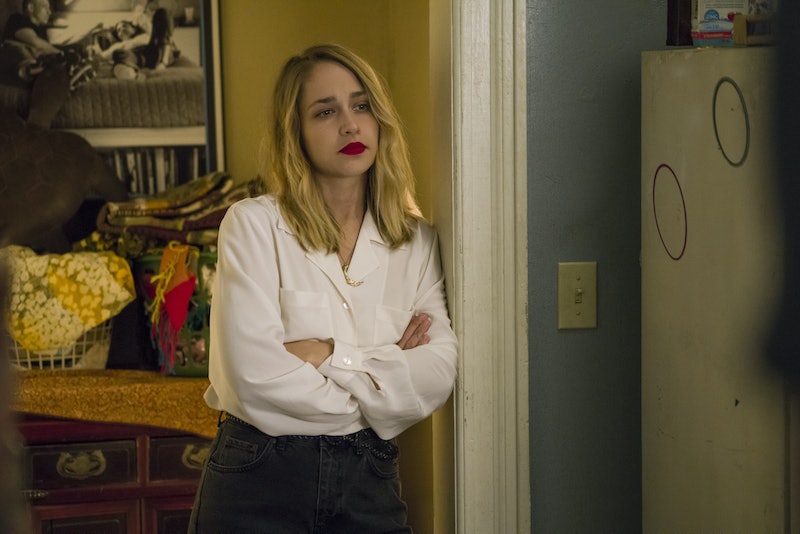 Unfortunately, Jemima Kirke has officially made her last appearance in the Girls universe, according to TV Line. As it turns out, the series' penultimate episode was actually the ultimate episode for sociopathic free spirit Jessa Johansson. So, why isn't Jessa appearing in the Girls series finale?

Well, the most simple reason is that she doesn't need to — because her story has already been wrapped up. Though it wasn't exactly wrapped up with a neat little bow and sunshine and unicorns, there's no denying the fact Jessa's reconciliation with Hannah has a satisfying sense of closure to it. When you think about it, they've alternately refused to listen to each other, and willfully (and unwillfully hurt) each other for the better part of two seasons now, so to now see them finally rushing to forgive each other — then dancing their way through a happy montage — well, it's about as sweet as you're going to get in the bittersweet world of Girls.

Of course, there's still some of that trademark Girls realism to their last scene — because we don't know if they'll ever reach the level of friendship they once had, the kind where they could laugh and cry in the bathtub together. Even with both characters reaching new levels of maturity, things aren't just going to elastically snap back to the way they were. After all, they've spent a lot of time estranged, and their apologies to each other don't erase what's happened between them — but as Lena Dunham put it in the episode commentary, "It opens a door for them to talk again."

While her apology to Hannah was the final cap on Jessa's story arc, her last scene with Adam in the previous week's episode plays a significant role, too: The nearly monosyllabic conversation they have at the end of "What Will We Do This Time About Adam?" — with her taking him back after he returns to her after his last hurrah with Hannah — also serves as an interesting form of closure for Jessa's overall story arc. As she speaks to him from the window, with him staring up to her from the street, she's strikingly impassive — but the smile that spreads across her face as soon as she's out of his sight tells a different story.

That duality in the scene is intentional: Dunham broke it down in the episode commentary, saying "There's something really beautiful about that moment when he comes home to her, and there's also something really sad about it, because she knows that he's coming home because he tried this other thing and it failed. So there's a real sad ambiguity to her letting him back up." Her relationship with Adam will continue to be a work in progress just like her relationship with Hannah — we won't get to see it, but we know it's happening.

All told, Jessa's ending is not as showy as Elijah and his White Men Can't Jump Broadway success, or as Instagram-worthy as Shoshanna's engagement party and Sprinkles cupcake ATM meet-cute — in fact, it's an ending that's messy and confusing as Jessa herself; it's an ending that asks as many (if not more) questions than it actually answers. Still, there's a deep sense of rightness to her last scenes — and it's just enough to numb the sting of saying a last goodbye to a character we've followed for six years now.