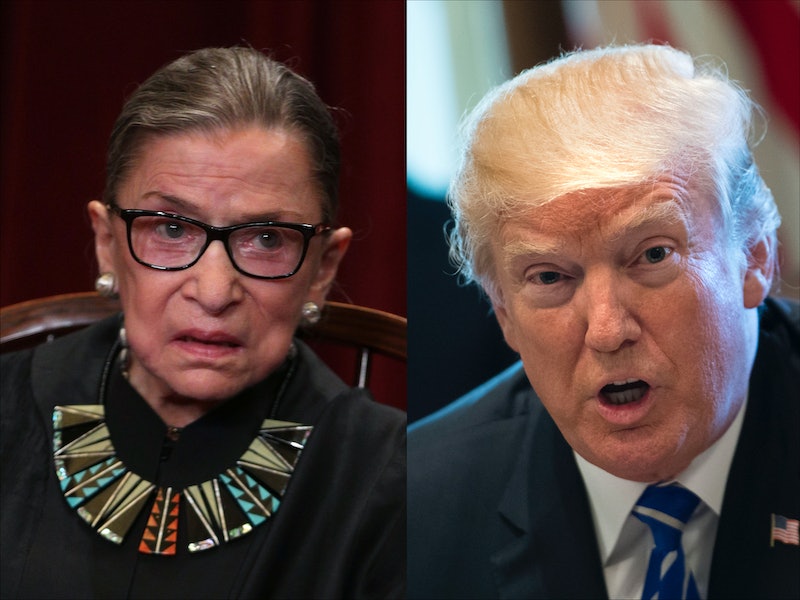 Some members of Congress have already announced that they will not be attending the State of the Union address, and they're not alone amongst important Washington players. Supreme Court Justice Ruth Bader Ginsburg will miss Trump's first State of the Union speech as well. Instead, she'll be in Rhode Island giving a talk at the law school of Roger Williams University during the daytime and then speaking again at a synagogue in Providence in the evening.

The Supreme Court is currently enjoying a month-long break from work, and the justices typically schedule many speaking engagements during this time, so it's not surprise that Ginsburg would have somewhere to be. However, it's also well known that she and the president have had a few tense moments in the past. Trump called for her resignation multiple times during the campaign, particularly when she referred to him as a "faker" and when she said that she could not imagine what the U.S. would be like if he became president. Trump responded in a tweet:

Justice Ginsburg of the U.S. Supreme Court has embarrassed all by making very dumb political statements about me. Her mind is shot - resign!

Ginsburg later issued a statement saying that she regretted making the comments, but she has not given any signal that she's considering stepping down from her post.

Despite Ginsburg's strained relationship with the president, it's not abnormal for a Supreme Court justice to decline attendance to the State of the Union. Conservative Justice Antonin Scalia, who was famously a good friend of Ginsburg's despite their very different stances on the law, did not go to a State of the Union between 1996 and his death in 2016, despite the fact that a Republican was in office for eight years of that time. His reasoning for not attending those speeches was simple — "You just sit there, looking stupid," he said in 2014.

Ginsburg, who is 84, did attend all of President Obama's State of the Union speeches. This won't be the first major event of Trump's presidency that she's skipping out on, however. She, along with Justices Samuel Alito and Clarence Thomas, missed the speech that Trump gave to a joint session of Congress in February of 2017. That means that Alito hasn't been to one of these major speeches since 2010, when he attended Obama's State of the Union and mouthed "not true" and shook his head while listening to Obama's criticism of their decision on the Citizens United case that completely changed where campaigns could get their money from. After that incident, Alito said that he was done going to State of the Union speeches, so there's a good chance that he won't be at this one either.

While it's easy to believe that Ginsburg has made this decision as a direct slight to Trump, her speaking engagement in Rhode Island was actually scheduled well before the Trump administration announced the date of the State of the Union speech. And actually, skipping this speech isn't the most memorable thing she's done in connection with a State of the Union speech; in 2015, she fell asleep at Obama's address. Later, she said that she'd been to dinner and drinks with her colleagues, and the alcohol made her drowsy.

This year, one prominent Trump supporter has used an image of her sleeping to make a joke at her expense. Former Arkansas Gov. Mike Huckabee tweeted the picture, saying "It's not fair that ppl are criticizing Justice Ginsberg [sic] for skipping SOTU! Security concerns wouldn't allow her to bring CPAP machine into House Chamber." (A CPAP machine is a device that helps alleviate sleep apnea.) Gov. Huckabee's fellow politicians, including some Republicans, roundly criticized him for what they called a tasteless joke.

Given her age, it's perhaps no surprise that Ginsburg would have dozed off at a speech that typically starts late in the evening. But even without her, the president should have plenty of lively congressmen and women watching him, plus at least five or six of the Supreme Court justices. Trump nominee Neil Gorsuch is very likely to attend, along with Chief Justice John Roberts, Justices Anthony Kennedy, and Stephen Breyer, and Obama nominees Sonia Sotomayor and Elena Kagan.