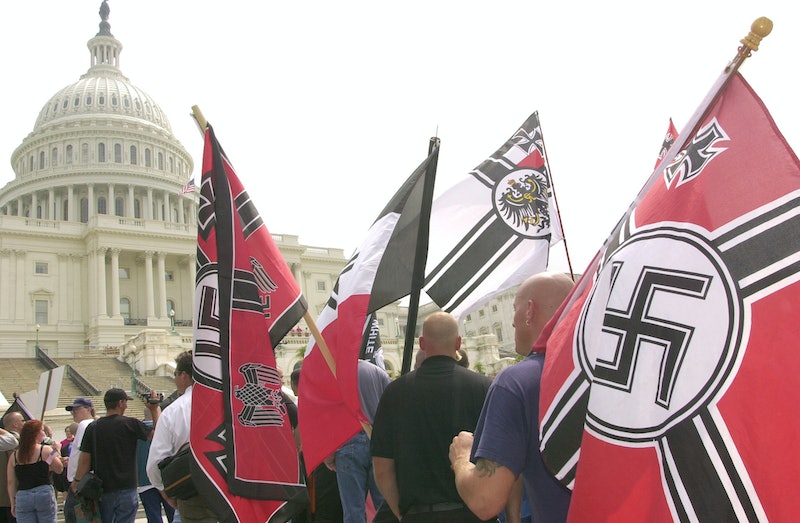 In recent months, neo-Nazi groups have been resurgent in the national conversation, thanks in large part to the high-profile, deadly demonstrations in Charlottesville, Virginia. And now, former members of the website Stormfront ― one of the oldest, most notorious neo-Nazi online hubs in the internet's existence ― are reportedly holding a conference in Tennessee on the same weekend as the Jewish high holiday Yom Kippur. Which might make you wonder: why isn't Stormfront online anymore? Why are these neo-Nazis and white supremacists now holding an actual, physical gathering?

The events in Charlottesville in mid-August had a seismic impact on the national consciousness. In the span of 24 hours, the city was hit first with a throng of torch-wielding white supremacist protesters marching over the removal of Confederate monuments, then racist and neo-Nazi elements attending the so-called "Unite the Right" rally the next day, an event which turned deadly when an anti-racist demonstrator was killed in a vehicular attack.

The answer, in simple terms, is that amid all the post-Charlottesville heightened scrutiny, Stormfront finally got shut down, bringing its more than 20 years in operation to an end. In the aftermath of the Charlottesville protests and attack, which saw one anti-racist counter-protester killed in a vehicular attack and many others injured, a heightened amount of public scrutiny was directed at online hate hubs like Stormfront. This also resulted in Stormfront's similarly named neo-Nazi contemporary, The Daily Stormer, losing its domain and retreating to the dark web.

As a result, the former members of Stormfront have lost what was once one of the most active, teeming internet sports for indulging neo-Nazism, white supremacy, anti-black hatred, Holocaust denial ― the whole gamut of abysmal, far-right racial hatred, essentially. As a result, they're now attending this physical gathering in Tennessee, conspicuously timed to coincide with Yom Kippur.

This is not, to be clear, the first time this kind of event has taken place. Even while Stormfront was still online, the organization would hold conferences in Tennessee, known as the "Smokey Mountain Summit." Needless to say, the content of these sort of events, like the website itself, are overtly racist, profoundly objectionable, and abhorrent.

The Stormfront website was shut down in late August, although anti-racist advocates had been clamoring for someone to take action for years ― in all, the site was fully functional for a staggering 21 years, having been founded in 1996 by former Ku Klux Klan grand wizard Don Black.

Black, 64, took over leadership of the KKK from notorious white supremacist and occasional political candidate David Duke in 1979. Notably, he was arrested in 1981 for his involvement in a plot to execute an armed invasion of the Caribbean island of Dominica, known as "Operation Red Dog." Black was ultimately prosecuted and convicted for his role in the plot, serving three years in prison as a result.

Stormfront itself was reportedly linked to several acts of whites supremacist murder throughout its time online, with the Southern Poverty Law Center identifying more than 100 murders committed by users of the site. Among them was Andres Breivik, a far-right, Norwegian anti-Islam terrorist who killed a staggering 77 people in a bombing and mass shooting back in 2011.

Suffice to say its presence will not be missed by anti-racists, although obviously, this weekend's scheduled gathering is a good reminder that just because the site has shut down doesn't mean the people who spent their time on it have disappeared. According to Black's announcement about the event last month, it is "not a secret meeting, but it is private," a not-so-surprising approach given just how reviled an ideology Stormfront promotes.