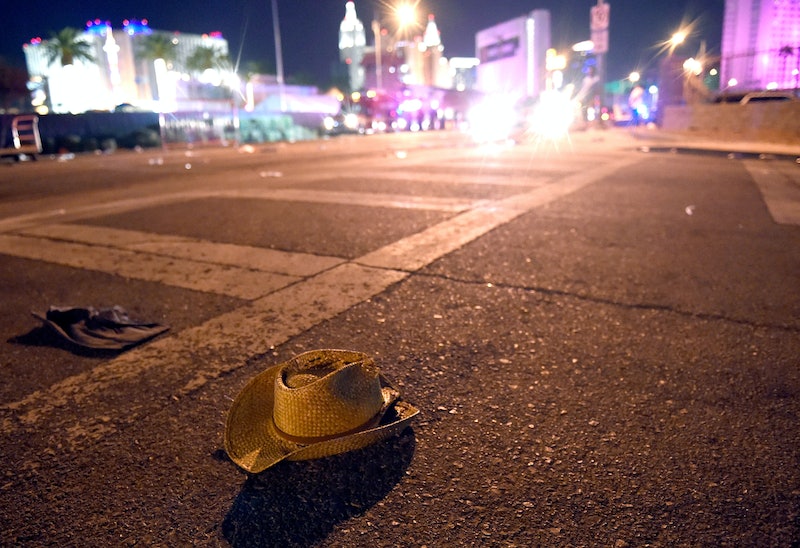 The deadliest mass shooting in American history happened Sunday night on the Las Vegas strip, where over 50 people died and over 500 were injured when a gunman opened fire at a music festival. The heartbreaking incident has brought millions to social media calling for national change, but that progress seems hindered by the morally and ideologically divided populous. In particular, one tweet about the Las Vegas shooting shows how far the nation has to go before people can start to agree on solutions, because right now, Americans can't even agree on what the problem is in the first place.

Reporter and liberal Twitter celebrity Shaun King was fired up Monday morning in response to the Las Vegas shooting. King responded to reports that the Vegas shooter was not a "terrorist," calling out the societal tendency to pigeonhole attackers based on their race or ethnicity. "Only in America can whiteness prevent the man who conducted the deadliest mass shooting in American history from being called a terrorist," King posted.

While King's tweet may seem like an inarguable truth to many Americans, it also highlights just how two-sided the American public is. There's a whole section of this country that isn't even convinced whiteness is a real concept, never mind that it is the root of many of America's societal maladies. Those who are versed in public racial discourse can see that backing away from the word "terrorist," particularly because of its amorphous definition, is little more than a way to marginally excuse the shooter's actions. Yet not everyone shares this worldview, a dissonance which is becoming more and more frustrating as Americans die while others fight about the cause of the nation's ills.

The flipside of King's statement is a very necessary rethinking of the word "terrorist" and whether it's a helpful designation for anyone. Terrorism has become so tied up in a racialized context through political and cultural hegemony that the only fully universal definition of a terrorist is someone of Middle Eastern descent. "Terrorism" does have a vague connotation of international activity, hierarchical structure, and religious affiliation. Yet those preconditions aren't actually necessary by definition, and they only seem to matter when the suspect is brown. Plus, at this point, it's not even clear if the associations came with the word's introduction into the American lexicon.

King is certainly right in pointing out the double standard of the controversial word, but the solution might not be to call the Las Vegas shooter a "terrorist." Now that the word has such heavy baggage, one has to wonder whether its use simply reinforces underlying stereotypes no matter what. The world is always going to want to draw a distinction between white and non-white people to preserve the superiority of whiteness — as long as the word "terrorist" is used in public dialogue, it'll be mentally accompanied by an asterisk that modifies the label based on race, because that's the way that the word was introduced in America. It's arguably more helpful to society as a whole to just cease the use of the word in the first place.

Again, all of this is predicated on the assumption that white people are privileged over people of color in this country, a basic premise that many Americans are still disputing. The nation collectively has so far to go before people can have deep conversations about the rhetorical impact of buzzwords like "terrorist," which makes Twitter commentary feel even more futile. Until there's a more ideologically level playing field, America's ability to advance together seems threatened at a deeper level than ever before.