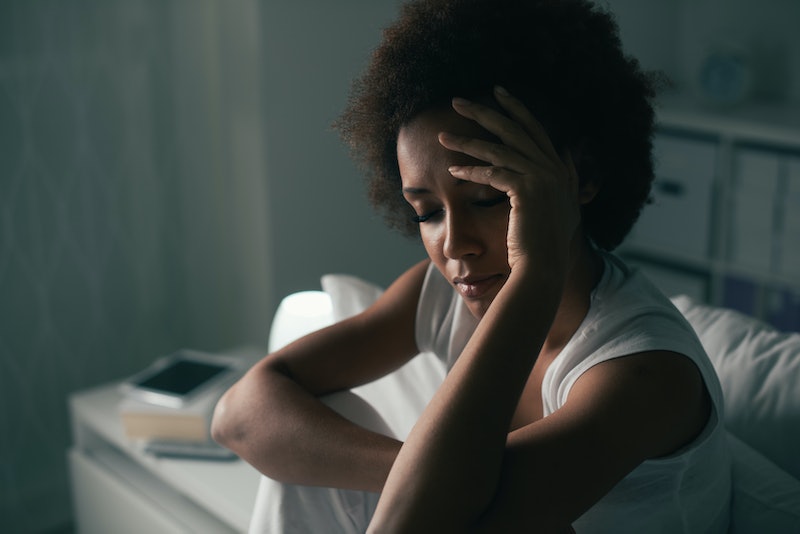 If you are friends with any new parents, you will likely understand why the phrase "sleeping like a baby" can seem kind of counterintuitive at first. In one of nature’s greatest ironies, the beings that need the most sleep tend to have notoriously unsteady habits. But according to a new study on how aging affects sleep habits, there is more logic than you might expect in the old comparison. A baby's inability to fall asleep unless exposed to very specific conditions may actually work in their favor. Struggling to get your suggested eight hours per night? There might be a biological reason why you have trouble getting to sleep as you get older.

Researchers from the University of Kent in the United Kingdom have identified a number of new ways that aging may impact one’s ability to obtain a good night’s sleep. The report, published in the journal Neurobiology of Aging, details a discovery that suggests with age, a certain structure in the brain appears to grow less sensitive to light. This structure, known as the suprachiasmatic nucleus (SCN), controls an individual’s circadian rhythm.

While you may have heard the term “circadian rhythm” in passing before, it is important to understand just how important of a role it plays in one’s sleep habits before you are to grasp the weight of this new finding. According to the National Sleep Foundation, a circadian rhythm is not a concrete structure in the brain, rather it is “basically a 24-hour internal clock that is running in the background of your brain and cycles between sleepiness and alertness at regular intervals.” The circadian rhythm is why you probably begin to fade after too many hours awake, and why you may experience a midday slump. The NSF further explains most adults experience the greatest plateau in energy during the middle of the night — when they are likely already fast asleep — and in the afternoon (which is why you may be tempted to take a nap under your desk).

So, how does light play into this?

While looking into one of the pathways in the brain that controls circadian rhythms, Dr. Gurprit Lall of the Medway School of Pharmacy, along with the rest of the research team, found the effectiveness of a neurotransmitter used to transmit light information and reset the circadian rhythm decreases as the brain ages. The neurotransmitter, a glutamate receptor called NDMA (N-methyl-D-aspartate, for those more scientifically-inclined) appears to undergo noticeable structural change as one ages, and this change is responsible for the decline in light response observed.

If you are having a hard time grasping what any of this means, the main takeaways are in fact rather simple. Just keep in mind (heh) a neurotransmitter is a chemical messenger released by a nerve cell in the brain called a neuron (if it isn't already clear, the prefix "neuro" is connected to anything involving the brain and nervous system). The NDMA is a specific type of chemical messenger this study found experiences noticeable structural change that results in a decreased response to light. This, in turn, impairs the its ability to set and uphold a stable circadian rhythm.

But, what does this mean for fight to get eight hours per night?

A decrease in sensitivity to light may very well impact a person's inherent ability to get tired at night, when it's darker. Researchers hope this new development will help pharmacologists to create treatments that, "... aim to improve both physiological and behavioral circadian clock ‘re-setting’ in older people," according to Martin Hererra's report.

Next time you think your sleep troubles are getting worse as you get older, take comfort in the fact it is probably not all in your head — and that now researchers have some understanding of it, they'll be able to tackle the problem head on with solutions that will actually work.