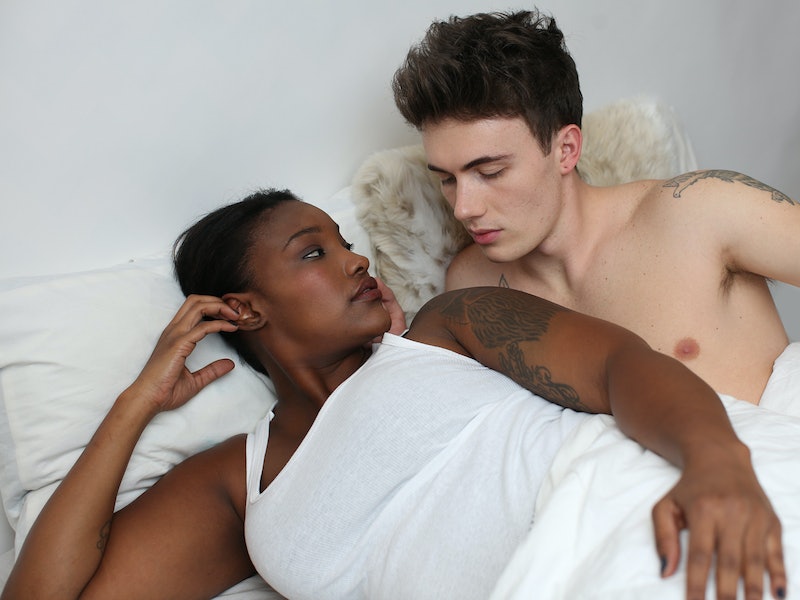 When you're having less sex than you used to have, it can be a little bit of a shock — and it's easy to start worrying about the state of your relationship. And while it can happen because of bigger relationship issues, don't automatically jump to that conclusion. First of all, remember there's no 'right' or 'normal' amount of sex to be having. "A healthy sex drive is different for each person," Amy Levine, sex coach and founder of Ignite Your Pleasure, tells Bustle. "Overall, it's when we feel balanced in our desire (it feels good to us, as opposed to something being off whether too high or low) and sexually fulfilled whether it's alone or with a partner."

Plus, it seems like every other week a new study comes up with the 'right' amount of sex to be having — and it's always different. So don't feel like there's a standard you're not meeting. Instead, focus on the underlying issues. Once you identify it, you can either be OK with it or fix it. So just make sure you and your partner are not ignoring the problem until it gets out of hand. Regularly checking in is key.

Here's why you don't need to worry if you're having less sex than you were before, because there are so many different explanations:

There Are Lots Of Reasons It Can Change

Sex drives can change all the damn time. In fact, one study found in Psychological Medicine found that women's libidos decreased when they're in a long-term relationship. But there are a lot of things that can mess with it— stress, anxiety, relationship resentment, or a change in schedule, just to name a few. But it's not always a problem. If you and your partner know that there's something affecting it — say, work stress— and that it's only temporary, you don't need to worry.

Sometimes shifts can be more permanent, and that's alright too. One of my friends, who's been with her boyfriend for five years, said that her sex drive is about half of what it was when they met. That's a huge change — but his has changed just as much, so they're both cool with it.

If You're Both OK With It, It's OK

And that's key — both of you being on the same page. So if you're worried that you're not having as much sex but not sure where your partner stands, then talk about it. “The couple needs to be open about what each of their drives and needs are, and then they can talk about it and find a happy medium where both feel OK about the amount of sex that they are having,” psychologist Dr. Nikki Martinez, Psy.D., LPCC tells Bustle.

Before you start panicking about your relationship, think of any relationship issues you think that may be behind it and talk to your partner. Obviously, it's tempting to ignore the bigger issues and pretend nothing's wrong, so you have to dig deep. If they're feeling OK and you're feel OK, there's no need to worry.

And If One Of You Needs More Sex, There Are Ways To Compromise

Obviously, is one of you is needing more sex than the other, then it's important to discuss “A relationship is like a bicycle, when one of the wheels is flat, it will still go, but not well," Eric Marlowe Garrison, sex and relationship counselor, and author of the book Mastering Multiple Position Sex, tells Bustle. "Even if only one partner is in that sex rut, it's going to affect the relationship sexually. When you need something that your partner doesn’t need, it's difficult to understand why they don't need it.” So make sure that you're both being open about your needs.

It's natural to feel anxious is there's a drastic change in your sex life — but think before you freak out about it. If you can't come up with a reason why it's a problem, both you and your partner are genuinely OK with it, and you feel sexually satisfied, then you don't need to stress.