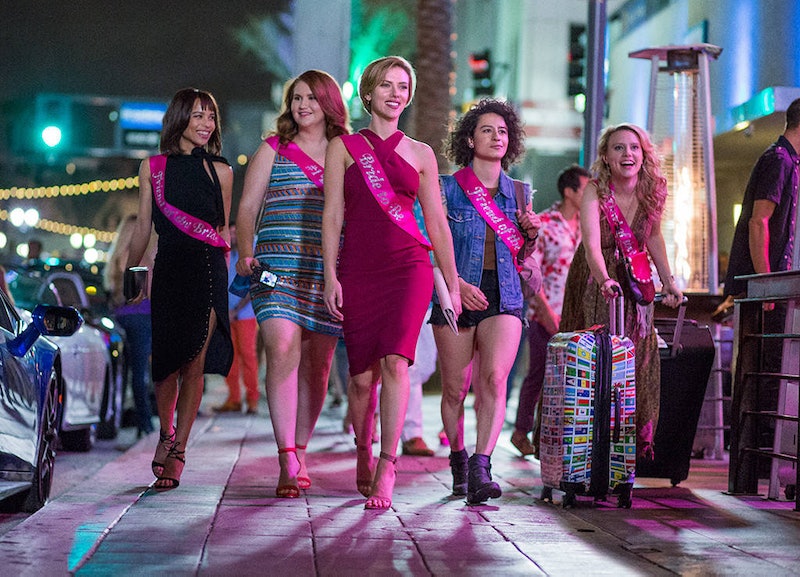 In between the superhero blockbusters, the terrifying horror flicks, and the loads of '90s remakes, summer 2017 also offers a few movies making up another genre: raunchy, big-budget comedies, starring ensemble casts filled with your favorite funny women. Back in May, there was Snatched, with Amy Schumer and Goldie Hawn; on June 16, there'll be Rough Night, starring Ilana Glazer, Kate McKinnon, and more; and a few weeks later, in July, we'll have Girls Trip, featuring Regina Hall and Queen Latifah, among others. As rare female-led works in a sea of men-centric movies, these films are undoubtedly important — but unlike female-led comedies of the past, they don't have to be perfect in order to allow others like them to be made down the line.

For years, now, it's felt like every R-rated, female-led film has had to be a massive success, both critically and financially, in order for studios to greenlight any other movies in that vein in the future. "Director Paul Feig shows women can carry comedies," read one LA Times headline after Spy did well in theaters. "Ghostbusters Did Just OK at the Box Office, So of Course Female-Led Blockbusters Are Doomed," said one (albeit sarcastic) Slate headline. Big-budget movies, especially comedies, starring women were seen as massive risks, likely to alienate male audiences and struggle to do well in theaters; and when they did manage to do well, they were held to higher standards, their success the only reason that any other similarly-themed movies could be made.

It didn't matter that plenty of male-led comedies flopped all the time and yet continued to be made without any issue, or that the ones that did well didn't impact the existence of others in that genre. Big, funny movies starring women faced enormous pressure, as if the future success of all womankind depended on these films' success. But as frustrating as this was, it made some sense, at least at the beginning. When Bridesmaids came out and made nearly $300 million worldwide, it shocked studios and critics alike, who'd previously assumed, it seemed, that only male-led comedies were capable of making such large mounts of money while also earning good reviews. In the year or two that followed the film's release, people wondered if any other similarly raunchy female-led movie would be able to replicate Bridesmaids' success. Was the act of funny women dominating the box office and winning over critics an anomaly, or simply a possibility that Hollywood had previously not tapped into?

The answer, of course, was the latter, but for awhile, R-rated female-led comedies still faced enormous pressure to both be good and do well financially, or negatively impact the future of other films in the genre. Movies like The Heat, Sisters, and Trainwreck didn't just face the normal studio expectations to make some money and hopefully earn some decent reactions; they were told they had to be perfect, in order for studios to greenlight more female-led movies down the line. And some of these films were, indeed, great (Spy, anyone?), while others were middling (Ghostbusters) and a few more were forgettable at best, disastrous at worst (Hot Pursuit, Identity Thief, Tammy...). That should've been fine; as said, male-led comedies ran the gamut of quality and box office success, and studios never had a problem greenlighting more of them to arrive. But each of these movies were deemed either wins for women as a whole if they did well, or potential roadblocks for future female-led films to be made if they failed.

Now, though, it seems like we're finally gearing up for a change. For the first time, major female-led comedies are coming out without the pressure their predecessors had to be huge successes. These films are earning decent, if not great reviews, and doing OK at the box office — and it doesn't spell disaster. Bad Moms, for instance, was a huge financial success, but floundered with critics — and yet that didn't stop its studio from OK-ing a sequel, out later this year. Snatched, meanwhile, earned just 36 percent on Rotten Tomatoes and made only $50 million at the box office, yet while that may have been a disappointment to Schumer and the filmmakers, most critics didn't deem its reception a roadblock for future, similar films.

So what changed? The amount of female-led comedies released in a given year is still significantly lower than male-led ones, but there has been an increase, and perhaps the influx of films led studios and critics to realize that they could exist without that added, unnecessary pressure. Even if a movie like Hot Pursuit, for instance, did badly with critics and at the box office, that didn't mean that Trainwreck would follow suit. Enough movies in this genre are released, now, that no one female-led film (comedies, at least — superhero movies, for instance, are another story) can influence the existence of others to come.

And while it's too soon to know what the fate of this year's upcoming comedies starring women will be, they shouldn't face the same amount of pressure as their predecessors did. Even if Rough Night and Girls Trip's reviews and box office takes are middling, that's OK. Of course, it'd be nice if these movie were something special, but female-led comedies should be allowed to run the gamut just as much as male-ones, without it mattering on a larger scale. After all, male-led comedies from Baywatch to The Nice Guys to Keanu have come and gone without earning major acclaim or massive box office revenues, and it hasn't stopped studios from making plenty more comedies starring men. Why should it be any different for films featuring funny ladies?

In a perfect world, every female-led comedy would be great, and do well — and so would every male-led one. We all want high-quality movies, and it's be nice if every funny woman in Hollywood, from Melissa McCarthy to Kate McKinnon, could lead one successful film after another. But of course, this isn't how it works; even the most talented stars lead a few flops from time to time. And that, finally, is getting to be OK when it comes to big, loud, lady-led comedies.